The series will premiere sometime in 2017. 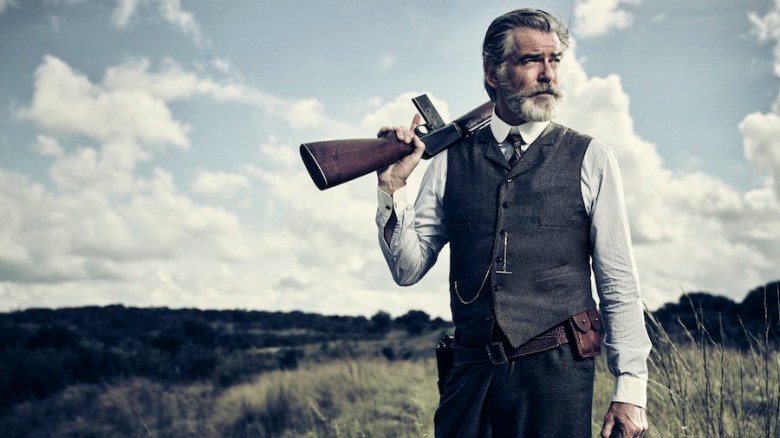 Pierce Brosnan as Eli McCullough in “The Son.”

Pierce Brosnan returns to television in the AMC drama “The Son.” Based on Philipp Meyer’s bestselling novel of the same name, the 10-episode season will follow Brosnan as Eli McCullough, the family patriarch of a wealthy Texas family who grew up among the Comanche tribe. AMC released the first trailer, which you can check out below (via Dark Horizons).

The series is set in two concurrent time periods. Jacob Lofland plays Eli’s younger self, who is kidnapped and indoctrinated into a tribe of Comanches in 1849. Sixty years later, he becomes an influential businessman and struggles to maintain his family’s business.

“I was told at a very early age that you have to roll with the punches,” says Brosnan in the trailer.

READ MORE: Pierce Brosnan to Star in ‘The Son,’ AMC’s Upcoming Drama Based on the Pulitzer Prize–Nominated Novel (Exclusive Photos)

The series hails from AMC Studios and Sonar Entertainment, and is executive produced by Meyer, Lee Shipman, Brian McGreevy and showrunner Kevin Murphy. Production is set to begin in Austin, Texas, in June.

Brosnan replaced Sam Neill, who was originally cast in March 2016 but left for personal reasons. This is his first big TV role since 1980’s “Remington Steele.” He’s done a few miniseries including “Around the World in 80 Days,”  “Heritage Minutes” and “Bag of Bones.” Best known for his film credits, including James Bond, he’ll next be seen in “The King’s Daughter,” “The Foreigner” and “The Only Living Boy in New York.”

This Article is related to: Television and tagged Pierce Brosnan, The Son, Trailers