The Sundance Film Festival mainstay returns with something new -- a YA feature that's already got distribution -- that still feels exactly true to her roots. 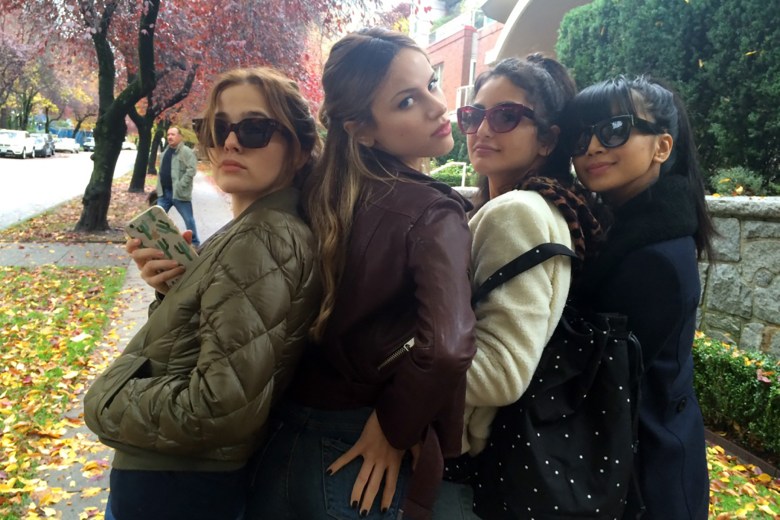 Ry Russo-Young was doing breathing exercises with me and her star Zoey Deutch before we sat down to chat about “Before I Fall,” her third film in a row to bow at the Sundance Film Festival. She was calm enough before she started breathing in and out in big, slow puffs, and she was positively beaming when we were done — with good reason.

Russo-Young may be a Sundance mainstay, but she’s never hit the festival with a film quite like “Before I Fall” – that is to say, a film that already has not only a well-regarded distributor (in this case, Open Road), but a set release date just a few weeks out. That’s one way to take the pressure off of the experience, but it’s understandable that the filmmaker would want to take a moment just to collect herself in the midst of the usual festival madness.

READ MORE: The 2017 IndieWire Sundance Bible: Every Review, Interview, And News Story From The Fest

Based on author Lauren Oliver’s novel of the same, “Before I Fall” could be described as “‘Groundhog Day’ for teenagers,” a repeating-day drama that centers on popular high school senior Samantha Kingston (Deutch, who is also at the festival with Danny Strong’s “Rebel in the Rye”), who finds herself trapped in a terrifying time loop that sees her dying early in the morning on February 13, only to wake back up again on February 12.

Forced to relive the last day of her life over and over again, Sam cycles through all the stages of grief, before realizing what she needs to do in order to break the spell (spoiler alert: it’s not easy).

“She understood this from the moment she read the script,” screenwriter Maria Magnetti told IndieWire the day after the film’s premiere. Russo-Young’s second feature – a micro-budgeted, grant-financed and improvised affair called “You Wont Miss Me” – debuted in the New Frontiers section back in 2009. Three years later, Russo-Young graduated to the U.S. Dramatic Competition lineup with “Nobody Walks,” a drama she wrote with Lena Dunham about a Los Angeles family thrown into turmoil when a young artist joins their ranks.

With “Before I Fall,” Russo-Young has again moved up — not only within the confines of the Sundance world, but the film industry at large. Her fourth feature bowed in the starry Premieres section, complete with an enviable Saturday afternoon premiere at a packed Eccles Theatre. The film was warmly received, and early reviews are overwhelmingly positive.

“Before I Fall” will open on March 3, and while Open Road has not yet announced its full release strategy, it is set to open in wide release. It’s a huge step forward for Russo-Young. While “Nobody Walks” was picked up by Magnolia Pictures and released in the fall of 2012, it made just $25,000 at the box office. “You Wont Miss Me” had a tiny limited run in New York City in 2010, care of indie outfit Factory 25. In mere weeks, Russo-Young will reach her largest audience yet, and coming off a bright Sundance premiere, expectations will be high.

On the surface, a YA novel might not sound like the sort of material that Russo-Young would go for, but “Before I Fall” is covered with her filmmaking DNA. Boasting an impressive and wide-ranging cast – from rising stars like Deutch, Halston Sage and Logan Miller to reliable vets like Jennifer Beals – the film hinges on strong performances, and Russo-Young’s actors deliver. And, despite its teen trappings, it also delivers a powerful message about redemption, hope and what it takes to be a good person.

Both Oliver and Magnetti are passionate about the possibilities of so-called YA stories – Oliver, in particular, is keen to overcome the “ghettoization” of the genre – and found Russo-Young to be on the same page from the jump. (Despite its years-long journey to the big screen, Oliver and Magnetti had not met before the festival, though they appear to have sparked to each other mightily.)

“It dismisses all of the experience of adolescence,” Oliver said of those who don’t think the genre has much to it. “The reason it’s denigrated is because of that, that’s basically just saying there is nothing of any value that any writer can say about this period of life. The irony of that is that those years are so formative.”

That’s at the heart of Russo-Young’s film, and why she was excited to tackle a genre that anyone familiar with her earlier work wouldn’t expect her to consider worthwhile. “I think YA has, in some cases, talked down to teenagers,” Russo-Young said. “And kind of concluded that their experience is cute or trite at times. One of things that ‘Before I Fall’ does is it dignifies the teenage experience.” Deutch echoed that sentiment. “It doesn’t belittle it at all,” she said. “Adolescence is extremely excruciating and it’s painful to go through all that.”

Holding tight to the emotion – no matter the age of the person experiencing it – helped frame the entire film, and allowed Russo-Young to stay true to her filmmaking passions.

“It’s a time when you’re really asking yourself these hard questions of who you are and what your purpose is,” Russo-Young said. “I think that is the universality of the story – we should all be conscious of how we treat others.”

Oliver’s “Before I Fall” hit shelves back in 2010, and Fox 2000 quickly snapped up the rights to the novel. Maggenti – a filmmaker and screenwriter who has always displayed a special affection for stories about teenage girls and who is no stranger to big screen adaptations – soon came on board to pen the film’s script. In 2011, Maggenti’s script appeared on the Black List of most liked unproduced screenplays.

Although Magnetti said she immediately felt that she had to make the film, she also described the process as “terrifying,” because she was forced to wrestle with making Sam and her wild story feel relatable. Finding a director who could speak to that was key.

“I wrote it as if I was directing it, and then I pushed the whole time for a female director,” Magnetti said. “I just pushed, pushed, pushed. I can’t imagine a man doing this.”

She pushed for a long time. While director Gina Prince-Bythewood was attached for a time, she eventually fell off the project and it remained without a director for a number of years. About three years ago, Russo-Young read Magnetti’s script.

“I had one meeting about it, and then I never heard anything,” Russo-Young recalled. “Like a year later, I got a call from my agent, and she was like, ‘Do you remember that script that you read?’ It really stayed with me, and I liked it, and that’s not always the case when I read scripts.”

By 2015, the seemingly fallow feature landed at Awesomeness Films, who pushed to get the film made quickly, officially announcing both Russo-Young and Deutch in September of 2015, with the bulk of the supporting cast coming on in October.

“When Ry came on board, we literally had no idea if it would ever get made,” Oliver said. “I didn’t know she would be right [for the job], but I knew she was incredibly passionate, thoughtful and motivated, and typically, that does yield the best results. And it did.”

Russo-Young was intrigued by the indie sensibilities of Awesomeness, and even more pleased at the trust her producers put into her. “They allowed us to cast young people who are close in age to the teenage parts and allowed us to go through the audition process, and not have it be a movie with notes about having to cast movie stars,” she said.

The filmmaker was immediately impressed by Deutch. “From the moment I saw her, it was just like, ‘there she is,'” Russo-Young remembered. Russo-Young and Deutch bonded intensely. Both said they wanted to continue to collaborate on new projects.

“We worked together emotionally,” Deutch added. “Just calling each other and crying, ‘I love you, we got this, we’re doing something important, we are worthy of doing something great.'”

Although the shoot was laden with the kind of issues that most indie films face – Russo-Young readily admitted that she didn’t feel like they had enough time on their 24-day shoot – the result is the filmmaker’s best film to date. It’s also one that proves her range and ability to stretch beyond the intimate character studies that have defined resume over the years.

“I think it’s a mistake people make, is that they try to look and project back and say, ‘You’ve done this and you can only do this,'” Oliver said. “When, in fact, the people who are best at something are the people who are most motivated to do it. That’s how I felt about Ry.”

“Before I Fall” premiered in the Premieres section of the 2017 Sundance Film Festival. Open Road Films will release it on March 7.

This Article is related to: Film and tagged Ry Russo-Young, Sundance 2017, Zoey Deutch