Eichner's looking for a viral hit of his own. 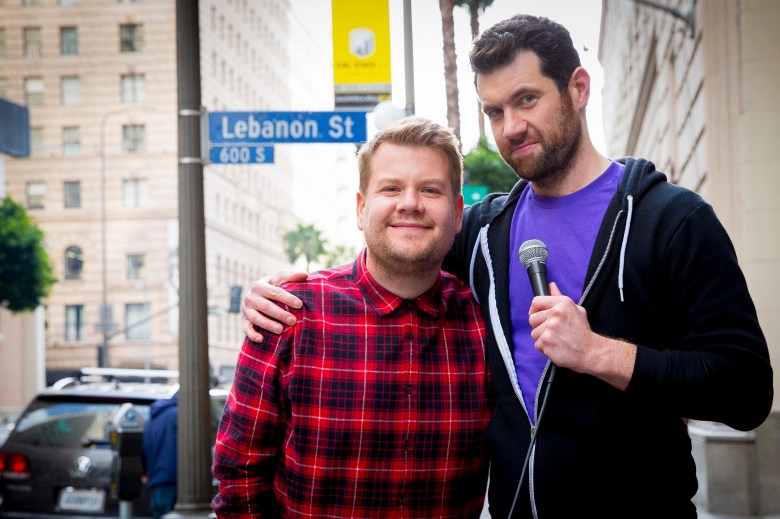 James Corden on ‘Billy On The Street’

“Billy on the Street” star Billy Eichner is such a big fan of James Corden’s “Carpool Karaoke” that he has come up with his own version called Curbside Conga Line.

On this Tuesday’s episode of the truTV show, Billy takes to the streets of Los Angeles for the first time with a very special guest: Corden himself.

“James Corden has had a massive success with Carpool Karaoke, so I’m out here today trying to find my own version of Carpool Karaoke,” Billy says in the preview of the upcoming episode. “Something that can go viral and be like a late night musical comedy sketch the whole family can enjoy. My version is called ‘Curbside Conga Line.'”

Eichner and Corden wander the streets aggressively trying to recruit some people to join their conga line. “It doesn’t have to be good, it just has to autoplay on Facebook,” Eichner says while congaing through a crosswalk. “Keep congaing, please. I need ratings.” At one point, Eichner slips into the infamous Deadpool mask, and approaches a complete stranger, asking, “Sir, do you like Carpool Karaoke? What about Deadpool Karaoke? That’s my show … See you at the Emmys.”

Later in the episode, Billy is joined by “Gotham” star — and Billy’s real-life best friend — Robin Lord Taylor to play a brand-new obstacle course called Can You Separate the Art from the Artist? Other games include Artistic Masterpiece or Justin Timberlake Song? and For A Dollar.

This Article is related to: Television and tagged Billy Eichner, Billy on the Street, James Corden