The new President treats his inauguration address like another stop on the campaign trail. If you didn't watch, here's what you need to know about what you didn't miss. 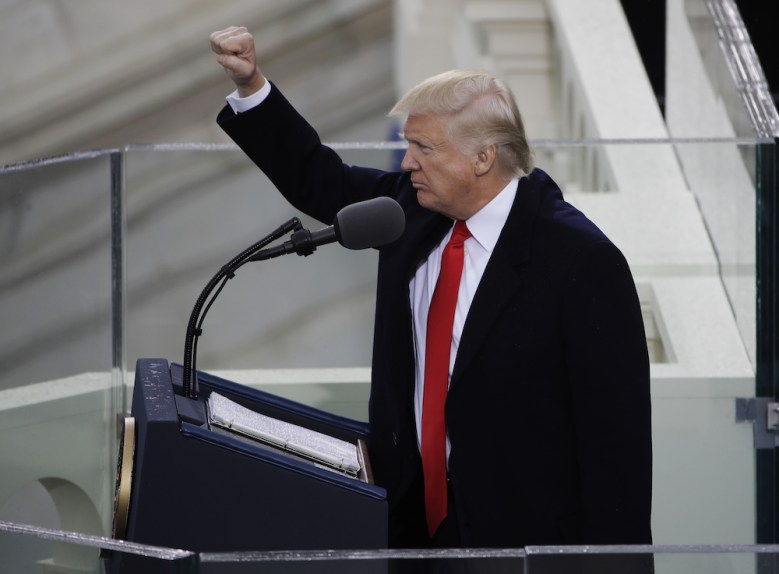 Much has been made about the connection between Donald Trump and his obsession with ratings, leading many concerned citizens to call for audiences to boycott watching his inauguration. After all, he may not have been able to see the stark drop in attendance outside the U.S. Capital building, but we know he can read a ratings sheet.

In the end, those who didn’t tune in — for whatever reason — made the right choice. What President Donald Trump said during his first presentation as president was meant for his supporters, and even they likely wondered if what they were watching was a campaign speech instead of an inaugural address.

To begin his 16-minutes of hand-waving elocution, President Trump pulled off a parlor trick befitting a pickpocket’s dexterity, if not a superior orator’s calculated cadence. After name-checking President Carter, President Clinton, President Bush, and President Obama in what felt like a courteous nod to the presidential predecessors present to see him take the oath, Trump turned on the government in its entirety.

“Today’s ceremony has special meaning,” Trump said. “We are transferring power from Washington D.C. and giving it back to you… the people. […] For too long a small group in our nation’s capital has reaped the rewards of government while the people have born the cost.” It was a diabolical twist worthy of a villain-to-be-named-later, as President Trump quickly shifted from thanking the Obamas for “their gracious aide during this transition” to repeatedly citing the ways in which Washington D.C. has separated itself from the rest of America. He claimed “the establishment” was too busy protecting itself to allow its citizens to flourish, resulting in “poverty in our inner cities, [and] rusted out factories scattered like tombstones across the landscape of our nation.”

“Today marks the day the people become the rulers again,” he said, before launching into a laundry list of problems (only?) he sees and aims to fix. “Every decision — on trade, on taxes, on immigration, on foreign affairs — will be made to benefit American workers and American families.”

READ MORE: ‘It’s Always Sunny in Philadelphia’ Eviscerates Manipulative Sitcoms Like ‘Fuller House’ By Making One of Their Own

President Trump has two rules to guide such decisions: “Buy American, and hire American.” Such standards go along with his other new policy: “From this day forward, it’s only going to be America first,” Trump said, before repeating the latter statement with greater emphasis. “American first!”

President Trump’s speech was filled with similar statements supporting the idea of selfish nations looking out for their own good. But even in a brief 16 minutes, his message ultimately became redundant, lending to the idea that he was treating his inauguration as yet another campaign stop. His rhetoric barely shifted from the “I” dominant speeches he gave prior to November to the “we” heavy address he gave Friday afternoon. If anything, the biggest change was how evident it quickly became that he was reading off a teleprompter. We already noted the stark difference in speechmaking talents between President Obama and President Trump when the former gave his farewell address, and — even with the toned down Trump present at the inauguration — his speech was a notable step down in presentation and message. But, more importantly, did the bolded text above sound familiar? It should. Tom Hardy used very similar language when he was playing Bane in Christopher Nolan’s last Batman film, “The Dark Knight Rises”: “The oppressors of generations who have kept you down with myths of opportunity, and we give it back to you… the people. Gotham is yours. None shall interfere. Do as you please.”

No line nor inspiration better encapsulates the alienating nature of President Trump’s inaugural address. New York Times TV Critic James Poniewozick made a point to watch every inaugural address since John F. Kennedy’s speech in 1961, and the one common theme across all speeches, bridging party politics and personal promises, was finding unity among the American people. Following increasingly brutal presidential campaigns, the victor’s first action was to reach out to the other side and make peace.

President Trump continued his campaign, and in doing so, gave no comfort to those mourning at home and little additional hope to the base who got him there. He proved what supporters wanted and what detractors feared: This president won’t be like anyone that came before.

This Article is related to: Television and tagged Donald Trump, Politics