Wang talks about the dangers of filming women's right activists in China and why she won't back down now that her family is being harassed by the government. 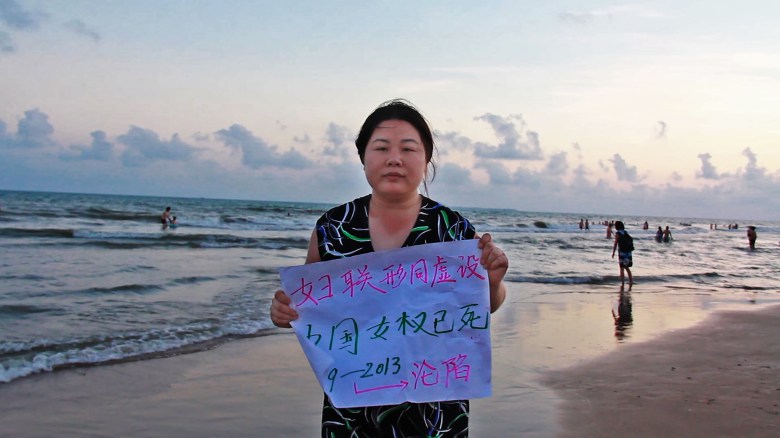 Fresh out of NYU, filmmaker Nanfu Wang spent the summer of 2013 with maverick Chinese women’s right activist, Ye Haiyan (aka “Hooligan Sparrow”) as she protested and called attention to a child rapist who evaded sexual assault charges by claiming he had hired the young women for sex (in China it is common for rapists to hide behind far weaker prostitution laws).

Wang soon became part of Sparrow’s small group of activists travelling the country, being harassed by authorities and putting their lives put in danger. Wang eventually got out of China with her footage, framing up her riveting documentary, which premiered as “Hooligan Sparrow” at last year’s Sundance Film Festival.

READ MORE: Pablo Larraín On Catching Ghosts to Make His ‘Neruda’ and ‘Jackie’

Wang, who like Haiyan, grew up in rural China and had to leave school at early age to support her family, told IndieWire’s Filmmaker Toolkit that she was initially disappointed when the film came out. She was drawn to journalism and documentary filmmaking out of desire to impact change. She’d hoped the film would force the Chinese to release from prison the lawyer who was part of Sparrow’s gang of activists.

“When I was [in China] I thought it was so hopeless because we are so powerless, we couldn’t change much,” said Wang. “I asked the lawyer when she sued the government, why did you still do it even though you know you are going to lose the suit.”

The lawyer explained to the young filmmaker that by suing, although ultimately unsuccessful, she was letting the authorities know there was a cost to detaining a citizen — they still needed to appear in court and respond to her suit. The importance of this lesson became clear to Wang after she was shortlisted by the Academy for Best Documentary.

When the shortlist was announced a few Chinese news outlets picked up the story, but the articles were quickly deleted, as was Haiyan’s social media posts about the film’s recognition. Haiyan was visited by the police three times, which was not that unusual, but so were members of Wang’s family.

“My family was visited by the national security agents, the same ones who interrogated me in the film and they went to my family and told them to warn me not to say negative [things]  in interviews,” said Wang. “They said they are monitoring what I say in the media. They have people collecting information from all the interviews I’ve done and they showed some of them to my family.  In some of them I said how they interrogated my family, so the national security agents this time told my family, ‘tell her she can’t tell the media that we came again.'”

Wang said she struggled with if she should stop doing interviews, for fear of what would happen to her family.

“I knew their lives are affected by what I do and what I say,” said Wang. “The pressure is not only coming from the authorities now, it is also coming from my family telling me don’t do this. I debated and I thought from now on, if I don’t say anything then I’m telling the government that their tactics are very effective and they [will] continue harassing people, intimidating them if they don’t want them to say anything. And that’s not going to help change anything and [it’s] really going to encourage them to be more aggressive. I’m hoping that by speaking out it will actually deter them from doing more harassment, or anything more extreme. I think with people [paying attention], I think it’s harder for them to continue doing what they do.”

While on the podcast, Wang talked about how she ended up going to NYU after having her formal education stop in middle school, while also detailing her journey of shooting “Hooligan Sparrow,” and her decision to put herself in the film.

LISTEN TO THE ENTIRE PODCAST ABOVE

This Article is related to: Toolkit and tagged Awards, Hooligan Sparrow, Nanfu Wang