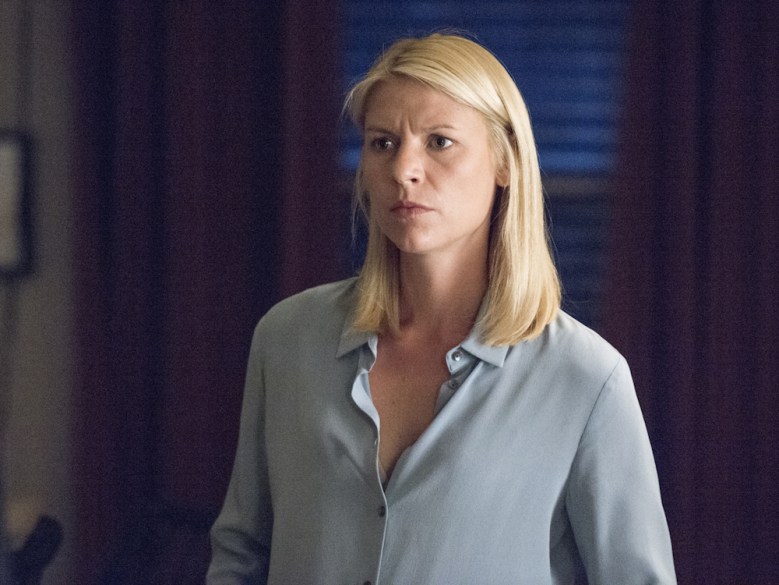 [Editor’s Note: The following review of “Homeland” Season 6, Episode 2, “The Man in the Basement,” contains spoilers.]

Hold on, we have to wipe the tears from our eyes. Give us a second. […] OK, I think we can put some words together now. Carrie and Quinn watching the video of his near-death from Sarin gas exposure was…well, it was heartbreaking. Not only do we never need to see that video again — “Homeland’s” insistence on showing it, over and over, is getting to be a bit much — but Quinn’s reaction to it shows just how much damage was inflicted.

After saying he’d never seen the video, he told Carrie he now wanted to see it. She told him what happened, filling in the narrative around the video before and after showing it, and they watched as Quinn convulsed, foamed at the mouth, and pissed himself. But the true pain hit after the video ended, when Carrie explained how she found him. “You saved me?” Quinn asked. “Yes,” Carrie said. “Why?”

“Why” indeed. The question haunting Quinn was one Carrie clearly had been wrestling with since Quinn survived the Sarin. Coming to terms with why Quinn means so much to her, and what exactly he is to her is something she’s struggling with, even as Quinn struggles to understand his own feelings toward Carrie. Between his shaky memory and her guilt, there’s bound to be more confusion, more anger, and hopefully more moments like this one where the two look each other in the eyes and learn what’s going on in there. Next time it may not be so tender — considering Carrie’s decision to pull Quinn out of his coma for information may have led to his current physical and mental condition — but the feelings will be all too real. Well, guess who’s lying to Saul again. Carrie told him straight up that she wasn’t advising the President-Elect; going so far as to take offense to Saul’s persistent questioning (/threat) in order to protect her secret. Then, at the end of the episode, we see Elizabeth Keane meet with Carrie for exactly that purpose. Saul sniffed her out, and she did such a great job lying to him that the ex-CIA director will likely fight for her innocence until she’s truly exposed. That’s bad news for dear Saul.

As for Carrie’s new role, it sure is dangerous. Not only would her past embarrass her if it hit the papers, but certain recent decisions she ordered in regards to drone strikes would paint the president in a bad light. Yes, Carrie is trying to make up for her past mistakes. No, the media doesn’t care when cold, hard facts (and cold decision-making) are handed to them.

READ MORE: ‘Homeland’ Review: Season 6 Makes You Wait for the Big Moments, But There’s Reason to Believe in Carrie Again We’re bumping her up one notch from last week simply because of the above reveal. Consulting with the President-Elect may seem innocent enough, but it’s a big step back into the game for an ex-agent who claimed she wanted nothing to do with politics, the CIA, and homeland security in general.

The second point is for her reckless decision to go after Tyrone Banks Jr.; a choice she was repeatedly advised against and didn’t gain much out of in the end. Yes, Tyrone admitted what he was doing and that Agent Conlon was working him. The FBI is trying to make a case on Sekou, even after Tyrone told them he was innocent. That might have confirmed what Carrie already suspected, but it won’t lessen the motivation for her opponents.

Between both recent decisions, it appears Carrie is living closer to the edge than she did last season. And with Quinn and a daughter to look out for, her life could get complicated — and dangerous — very quickly. Let’s be honest: After two weeks, it looks like Rupert Friend is going to walk away with this award more often than not. We gave him due credit last week, and this week’s performance continued to build Quinn’s new, damaged psyche. Friend isn’t chewing up scenery or stretching to create bigger moments on his own: he’s trusting the writing to guide him through, and the results are more affecting because they feel so grounded. His physical alterations — to his gait and vocal patterns, especially — exemplify a performance that’s precise rather than manic; a distinguishing factor when an actor can go big with his character, and instead hones in on the little changes that make a monumental difference.

But hey — how glad were we to see Max?! Maury Sterling is always a welcome sight on “Homeland,” and not just because he’s usually doing a big favor (or six) for Carrie. His involvement makes things personal, given his history with the show, and Sterling plays him with a nice balance between detached researcher and attached friend. He made a great foil for Quinn’s curmudgeon (especially when he called him out for being an asshole), so hopefully we’ll see him again soon.

Quote of the Week

“It would be a huge embarrassment to everyone if
it got out you were a secret adviser to the president.
That would not play well at all.” – Saul

So…it’s going to get out, right? Carrie can’t remain a shadow adviser forever, if only because this is TV and “Homeland” thrives on exposing secrets. So the only question is when and what: When will the secret get out, and what about Carrie is going to be exposed? When is a good question: If it’s exposed before the President-Elect takes office, it could lead to policy changes within the existing administration (like the much-discussed Iranian deal) or political shifts in preparation for a new president people suddenly know a little better. If it’s after, the impact may damage the President’s reputation, but let’s get into what we’re really wondering: the “what.”

Let’s assume, for instance, the Brody stuff is off the table. None of the stories from Seasons 1-3 would paint her in a favorable light, but “Homeland” seems to have moved on from Brody. So we’re guessing Carrie’s status as the Drone Queen will come up, not to mention any troubling secrets Saul has been harboring.

And therein lies the real dramatic pull: How will Carrie’s boldfaced lie affect her relationship with Saul? The two haven’t exactly been bosom buddies, but there seemed to be a growing professional decorum between the protege and mentor (even though the latter is still hurting from Carrie’s departure from the agency). We’ve wanted nothing more than for these two to be friends again, but there’s simply no way Dar Adal and Saul would be content to let a former agent affect their existing agenda — especially Carrie. Better prepare for a spy v. ex-spy brouhaha.