The gang set its sights on sitcoms in "Old Lady House: A Situation Comedy," using the episode to educate audiences on the manipulative trickery of seemingly innocent comedies. 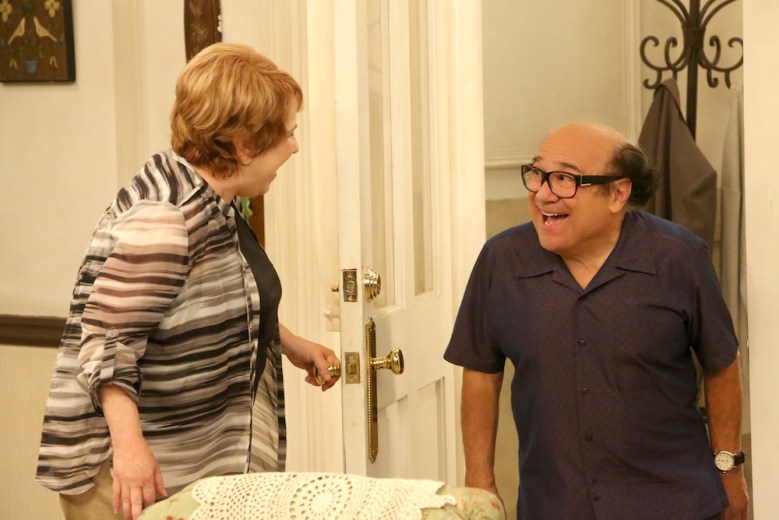 Rob McElhenney, Glenn Howerton, and Charlie Day have never been afraid to get a little meta with “It’s Always Sunny in Philadelphia.” From “The Gang Recycles Their Trash” (in which plot points from previous episodes were repurposed) to “The Gang Misses the Boat” (a Season 10 episode where the people of Paddy’s Pub decide they’ve drifted too far from their roots), episodes crop up where the “It’s Always Sunny” gang is doing more than comment on society: They’re talking about themselves.

What could come across as unappealingly egocentric is instead charmingly apt considering “Sunny” is all about selfish assholes, and the topic of this week’s episode channels such narcissistic villainy toward a new purpose: highlighting the difference between half-hour comedies and manipulative sitcoms. Similar to the brilliant deconstruction of classic sitcom structuring in “The Gang Tries Desperately to Win an Award” (the lighting! the romantic pairings! gah, it’s all so good!), “Old Lady House: A Situation Comedy” steers its focus away from multi-camera series’ lack of realism and toward the manipulative power they wield.

Written by Dannah Phirman and Danielle Schneider, “Old Lady House” keeps to the series’ grand meta traditions by introducing a scenario in which the gang creates their own sitcom — unwittingly and with minimal effort. The gang decides to videotape Mrs. Mac (Sandy Martin) and Mrs. Kelly (Lynne Marie Stewart) in order to figure out if their shared domestic life is unhealthy. They set up Dennis’ surveillance system, under the guise of gifts, and thus establish a window into the private world Mac is denied access to and Charlie refuses to enter. (Charlie’s utter dismissal of his mother may be the funniest ongoing joke that has the added benefit of making guilty viewers call their own moms.)

Said window looks suspiciously like a classic sitcom. Most of the activity takes place in one room (the moms’ living room) and is captured under bright lights via a traditional multi-cam setup: One camera gets a wide shot of the full space while two additional cameras provide close-ups of the “actors.” Mac, Charlie, and Dennis gather to see what happens, eating chips as though they’re watching Thursday night comedy, but they’re quickly faced with a dilemma: Are their mothers’ actions comical or dangerous? When Mrs. Kelly picks up a hammer to attack a sleeping Mrs. Mac, their sons can’t decide if she was just messing around — a la Jackie Gleason on “The Honeymooners” — or if the two are actively trying to hurt each other. Dennis offers a solution: He adds a laugh track to the footage, and — suddenly — it’s funny! He removes it, and the scene’s tone “goes right back to super dark.” Undecided on their mothers’ true intentions, the gang agrees to keep watching as Dennis keeps tweaking the presentation. Sound effects are added, catch phrases coined, and guest stars great (Frank) and terrible (Dee) stop by “Old Lady House” to boost ratings. (It must be mentioned that Dennis even took European viewers into account when Uncle Jack and his “creepy pedophile vibe” stopped by.) Romances are generated from the “ooo’s” of a fake audience and re-casting for diversity reasons is strongly considered.

Throughout the episode, Dennis slowly creates a sitcom worthy of NBC circa 1985 (or present-day CBS). “Mrs. Mack and Mrs. Kelly have a classic comedic rivalry,” Dennis boasts, comparing them to Tom and Jerry or Abbot and Costello. “The grunty one physically abuses the shrill one, and the shrill one psychologically abuses the grunty one.” Even after citing such abuse, all concern for the two mothers quickly disappears thanks to Dennis’ expert emotional engineering.

“Old Lady House” concludes as all falsely innocuous, people-pleasing sitcoms must: happily. Charlie comes clean and tells the moms how their sons have been spying on them, and — instead of reacting with anger for violating their personal space — Mrs. Kelly is touched her son cared enough to watch her like a TV show. The group hugs, shares a laugh at Dee’s painful fall, and Dennis pulls the plug on “Old Lady House” for good…or so they think.

Dennis’ sociopathic manipulation running rampant throughout the episode gets a fitting final scene in which we watch as he watches the gang from his all-seeing monitors. Considering Dennis has always recorded people in secret, the final twist is both fitting to “It’s Always Sunny’s” narrative and applicable as a meta message to the audience at home: Remember who’s controlling what you watch, and be mindful of how they control you. Throughout the episode, there’s no mention of a specific sitcom the gang is spoofing. It would have been very easy for the writers to throw in lines like, “This is better than ‘Fuller House’!” or “Could we do it like they do on ‘The Big Bang Theory’? Don’t they use a lot of music cues?” But instead of limiting the scope of their commentary to one or two shows (especially easy targets like the above), writers Phirman and Schneider use generalities to force their audience to consider more options. “What show are they talking about?” quickly becomes “Are they talking about my show?”

The episode title is the most pointed reference to “Fuller House,” but the Netflix revival is certainly the first show that came to mind for this writer. In my review of the abominable first season, how the show manipulates its audience to feel a certain way came up, in part because the show lacked real jokes:

Parts of [“Fuller House”] do feel like they’ve been pulled straight from the heyday of broadcast sitcoms, but only the era’s worst elements. For one, the main source of humor in “Fuller House” is of the “Kids Say the Darnedest Things” variety, as viewers are practically begged to laugh at statements that aren’t even jokes. Even though “Fuller House” was indeed shot in front of a live studio audience, there’s simply no way as many people laughed at lines like, “Aunt Stephanie is not a morning person” as we’re made to believe.

“Old Lady House” attacks the post-production tricks utilized to lighten up dark or inappropriate subject matter. Some of it is blunt, like Frank’s appreciation of laugh tracks: “Having those other people laugh let’s me know when I should laugh!” Other moments are more subtle, such as when Dee says the show needs a physical comedian because the two moms are “just smashing each other with stuff.”

But all of “Old Lady House” illustrates the difference between the scathing satire “It’s Always Sunny in Philadelphia” aims for — and often achieves — on an episode-by-episode basis and how cookie cutter comedies cheaply manipulate their audience. “Sunny” makes it clear what’s funny and what’s not by keeping their main characters from learning the same lesson. It refuses to let its audience be duped by cheap tricks as easily as Mac and Charlie are manipulated by Dennis the puppet master.

For that, we owe “Sunny” thanks. For now, at least we know we can laugh freely.

This Article is related to: Television and tagged Fuller House, It's Always Sunny in Philadelphia, TV Episode Reviews, TV Reviews