Writer Simon Rich reveals what's been essential to helping his insane comedy evolve into something different in Season 3. 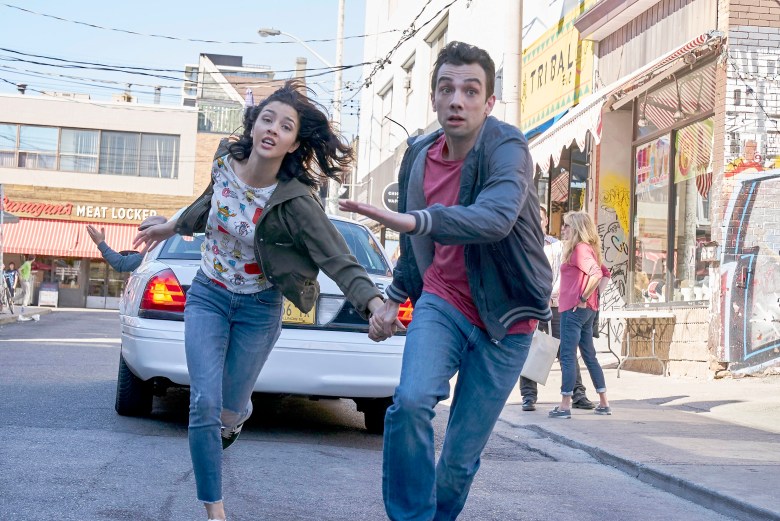 If you were quick to judge “Man Seeking Woman” based on its title, it’s time to rethink that. When IndieWire first interviewed series creator Simon Rich in 2015, only a few episodes of his new FX comedy had been released, and all of them revolved around the adventures of Josh (Jay Baruchel) as he went looking for love.

But even then, Rich’s vision for “Man Seeking Woman” went beyond just one young straight white male’s struggles: “Initially it’s centered on Josh’s experiences in the world. As the season progresses you find that it’s a little less Josh-centric and a little less male-centric. Without giving too much away, I think the audience will be surprised by just how much females enter the show,” he said at the time.

Three years later, Rich (whose credits include “Saturday Night Live”) has more than delivered on that promise, with multiple breakout episodes devoted to exploring the worlds of his talented ensemble, which includes Britt Lower, Eric Andre, Robin Duke, and Mark McKinney. “In our second season we tried to expand the world a bit further, but [Season 3] really feels like an ensemble, like we’re really coming at our stories from a variety of perspectives, and I think this show is much richer and rewarding as a result,” he told IndieWire during the Winter 2017 Television Critics Association press tour. Rich is quick to give credit to his collaborators for the show’s success, with a largely new writing staff for Season 3 that includes “The Onion” alumni Dan Mirk, “Atlanta” writer Stefani Robinson, comedian and New Yorker contributor Cirocco Dunlap (who had never written for a sitcom before) and “SNL” favorite Mike O’Brien (also new to the sitcom world). He also had plenty of praise for newly enlisted directors including Rachel Goldenberg and Ryan Case.

All of these people had to dive into an aesthetic unlike anything else on television — the dramatic ups and downs of “Man Seeking Woman” are grounded in real emotion but depicted by fantastical extremes.

For Season 3, the biggest change is one that fundamentally tweaks the show’s basic premise (and title): The addition of Lucy (Katie Findlay), with whom Josh enters into the strange new world of a serious relationship. That doesn’t mean things are any easier for the pair, as they struggle to balance their new lives with this new love, and it doesn’t mean the show has pulled back on its elaborate fantasy sequences, which interweave Jonestown riffs, Sherlock Holmes fantasies, horror film homages and many, many more genres into the action.

And yet, Rich thinks his show is downright conventional — at least, on a story basis. For more insight into why that is, and why FX’s flexibility with episode length keeps him from having a heart attack, an edited transcript is below.

There are some creators, especially those working with streaming services like Netflix, who get to really experiment with the runtime of their episodes. FX is a little more strict in that respect. Are there benefits to that strictness?

I’ve always loved economical writing. My first two books, I didn’t have a single story that was longer than two pages. At “SNL,” I would always get teased because my sketches were five and a half pages, and everybody else’s was at least 10.  Often at the rewrite table, a lot of work went into trying to make my sketches long enough to justify putting them on television. All my books are short, both of my novels are very, very short, and I’m really at heart a short story writer. That’s mainly what I do to this day, is write short, short stories.  So I’m always trying to make things as streamlined as possible, and I wouldn’t want another ten minutes [laughs]. I’m very happy they get to be as short and tight as they are.

Do you ever struggle to hit the exact right timing?

FX is crazily flexible, and we’re allowed to take pretty big swings. In terms of our running time, it varies from 18 to 22 minutes. They’re really good about letting it be the length it wants to be. And that’s just an example of how story is king at FX. If you do an episode and the story really resolves at 18 minutes, they don’t make you add 3 minutes of funny filler. And if the episode really requires 24 minutes to resolve itself, they’ll give you the extra time. It’s a huge luxury. How would it change the show if you did have to hit the exact 22:30 minute mark?

Oh, it would hurt us badly. [Laughs] Honestly I think it would be catastrophic for us. The show takes so many swings, and a lot of it doesn’t work. On set and in the edit room we are constantly pruning unnecessary story beats, where we’re cutting jokes which didn’t read, where we’re doing surgery on it till the day it airs. It would break my heart if we had to leave in something that I didn’t think worked. And I know on some shows, oftentimes you do, and vice versa. It would kill me if we went long and I had to lose something that I loved because it didn’t fit into the time frame. Ah man, it makes my heart race just to think about it. It’s so scary to think how creatively stymied we would be by a strict, strict [timeframe].

You mentioned that two of your new writers had never written a sitcom before. Does this show feel like a sitcom to you?

I think it’s the most traditional, conventional show on television. [laughs] For God’s sake, we named our leading lady “Lucy”! As absurd as the show gets, we are extremely structurally conventional. We put more time into story than into anything else. We make sure it has a proper Act 1, Act 2, Act 3 structure. We try to tell the simplest, cleanest stories that we possibly can, that are as universal as we can make them. Of course we try to do it in a new way, with a unique mode, but on a story level we are the by the books. They’re going to fight at the end of Act 2 on our show, and they’re going to hug at the end! [Laughs]

Not that it’s a bad thing or good thing either way, but have there been situations where you have an idea for a crazy moment, and you reverse engineer it into a story?

In Season 1, we sometimes did that, and I think it was to the detriment of the show. It really wasn’t until the end of Season 1 that we really hit our stride, and we learned how to make the show narratively propulsive, character driven, and story first. The more common thing that happens in the third season is somebody will come up with an extremely funny concept, and we’ll spend a day trying to convince ourselves that maybe it’s justified by the story. But we’ll ultimately throw it away. Sometimes we’ll write it up just for fun and put on the side to laugh about later on, but the most important thing in our show is making sure the characters’ stories are truthful. That’s what we care about above all else.

Season 3 is taking a big leap forward, in terms of premise and approach. When you think about Season 4, do you see yourself having to take an even bigger leap?

Oh yeah, big time. I think that in a fourth season, we would explore dating from brand new points-of-view, and I think we would break a lot of new ground for this show. I think there’s no point in making TV these days if you’re not going all out and taking big swings. Who knows how long this amazing situation will last, where we have the freedom to make such personal and meaningful work? Now’s the time to take risks, before it all comes crashing down.