The exclusive video shows the talented and diverse cast and crew expressing their love for the SAG-nominated series. 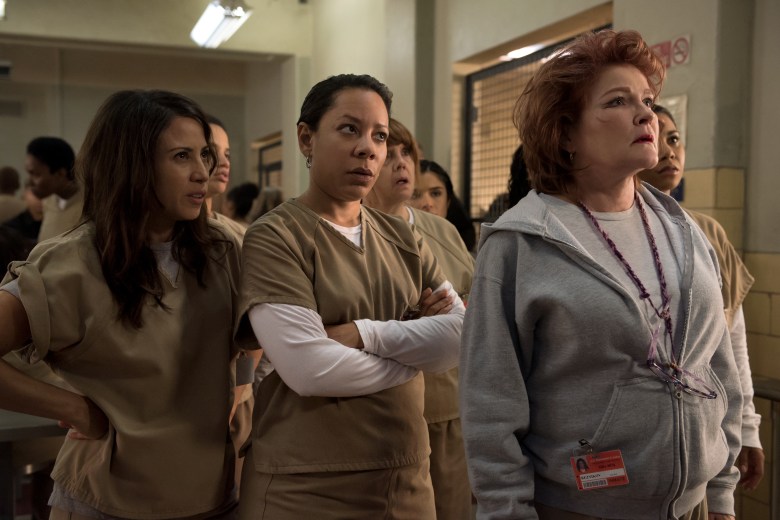 Kate Mulgrew, Selenis Leyva and Elizabeth Rodriguez in “Orange is the New Black.”

“Orange is the New Black” is sustaining the massive amount of success which has propelled it as one of Netflix’s most popular shows, as seen by the overwhelmingly positive reception to the show’s fourth season. Recently, it was announced that the series would continue to be carried for three more seasons, and in preparation for the show’s fifth season and appearance at the SAG Awards, a new featurette has been released.

READ MORE: Laverne Cox On How ‘There’s A Little Performance in Gender,’ From ‘Orange is the New Black’ to ‘Rocky Horror’

“They’ve managed to collect a handful of women who have perfected that art — break your heart and make you laugh,” says Yael Stone, who plays Lorna Morello on the show, pinpointing the comical and emotional tone which makes the show what it is.

The video sprinkles bits of comedy throughout, and puts a focus on its cast and creator, who praise the group effort which has made the show so successful. This success has resulted in 2 SAG nominations: Outstanding Performance by a Female Actor (Uzo Aduba) and Ensemble in a Comedy Series. The show and Aduba have won in both categories the past two years, so the confidence on display in the reel is certainly backed up.

READ MORE: Review: ‘Orange is the New Black’ Season 4 Will Wreck You (In the Most Important Ways)

“I think women get tired of the standards that Hollywood continues to impose. Finally, this is a series about us,” says Kate Mulgrew. In light of the woman’s marches happening all across the country last Saturday, the empowering words of the all-female cast seems as timely as ever.

The Emmy nominated show has yet to announce a premiere date for its fifth season. You can catch the 2017 SAG Awards on January 29 at 8:00 p.m. on TBS and TNT.

This Article is related to: Television and tagged 2017 SAG Awards, Netflix, Orange is the New Black