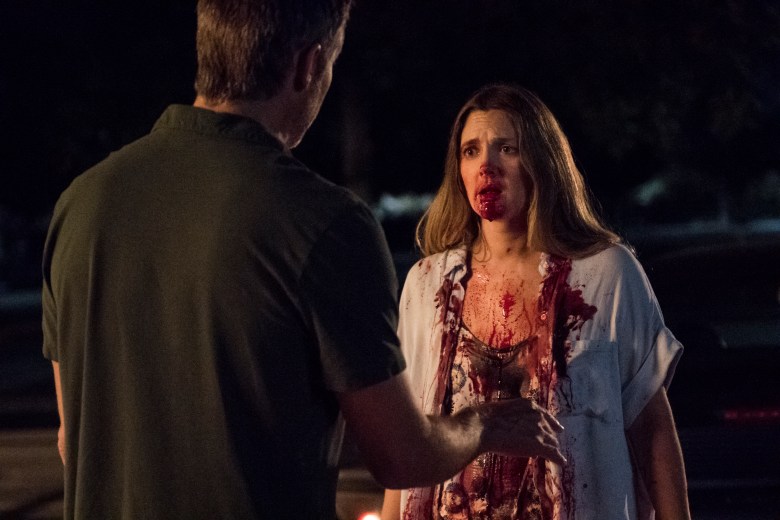 Drew Barrymore has a special new diet that will make you look younger, have more energy and feel sexy. The meal plan also includes an added bonus that we weren’t quite expecting.

The actress stars in the forthcoming Netflix comedy series “Santa Clarita Diet.” The streaming service has revealed major twisted details about her character, as well as shared new photos that raise questions.

[Editor’s Note: Spoilers for “Santa Clarita Diet” follow. Proceed at your own risk.]

Barrymore plays California realtor Sheila Hammond, but the major twist is that… she eats people. The plot had previously set the show up to be a comedy about a couple and how Sheila goes through a “dramatic change [that sends] their lives down a road of death and destruction…but in a good way.” New details from USA Today reveal that after Sheila’s death in the pilot, she and her husband have to work together to keep her new cravings under control, all while continuing their job as realtors.

“We do this sort of Cro-Magnon type of evolution with her over the course of the 10 episodes. No gimmicks, no prosthetics, just an awakening,” Barrymore told the site. “I just really enjoyed just shedding a snakeskin with her, so it became a really fun obstacle that I wasn’t even planning for but seemed so conducive and fun and healthy for my own life.”

READ MORE: The 17 Netflix Original Series To Be Excited About in 2017

The new stills show Barrymore with blood dripping down her mouth and shirt and eating raw meat. Netflix also shared two ads, one features Sheila “promoting” the diet with a cup that has fingers and eyeballs in it and the phrase “eat whoever you want.” The second ad shows Barrymore’s onscreen husband, Timothy Olyphant, and the words “get a killer body” and “100% flesh.”

Check out the new photos below.