The clip is featured on the 3-D Collector’s Edition Blu-ray. 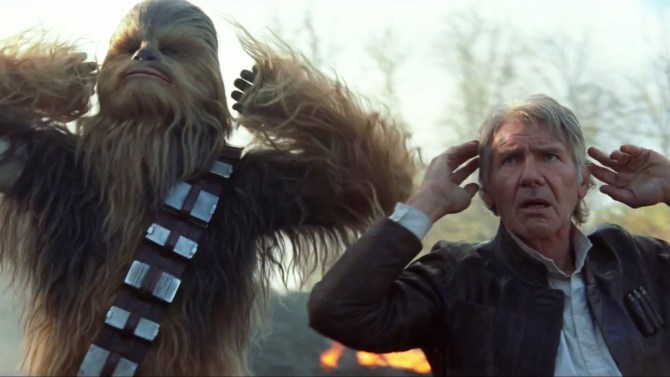 In the original “Star Wars: Episode IV,”  C-3PO plays chess with Chewbacca and is warned not to beat him at chess. “Sir, nobody ever worries about upsetting a droid,” says Threepio to Han Solo, who replies, “That’s ’cause droids don’t pull people’s arms out of their sockets when they lose.”

While Chewie is always seen as a scaredy cat and never overly violent unless he has to be, a deleted scene from “Star Wars: The Force Awakens” reveals that there’s a darker side to the Wookiee that we didn’t get to see.

The scene in question is set in Maz Kanata’s castle on the planet of Takodan, and shows Rey (Daisy Ridley) getting confronted by Unbar Plutt, her grotesque junk boss who made her life miserable on the desert planet of Jakku. As fans know, Rey escapes Plutt by stealing the Millennium Falcon that is in his possession, while fleeing from the First Order.

The clip, available on the 3-D Collector’s Edition Blu-ray, shows Plutt threatening Rey until she draws her weapon and then he snatches it away from her. As things get heated, Chewie comes up to Plutt, takes the blaster away and rips off his arm.

We’ve never seen Chewie behave this way before, but apparently Solo knew what he was talking about.

Check out the clip below.

This Article is related to: Film and tagged Star Wars: The Force Awakens, Video