From "Peaky Blinders" creator Steven Knight (along with Tom Hardy and his dad, Chips Hardy) comes a vicious and uber-masculine period drama. 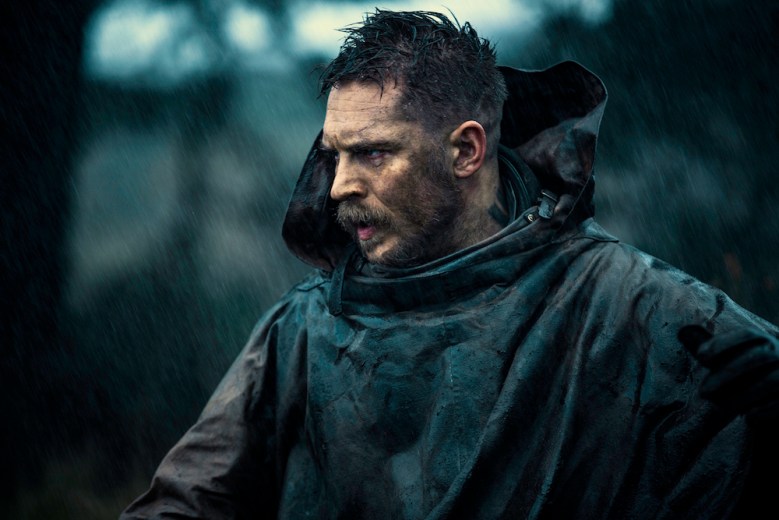 Some stories want to explore big ideas. Some strive to be allegorical, existential, soapy, or good ol’ fashioned fun. And some stories just want to watch the world burn.

The origins of that line lead to “The Dark Knight,” not “The Dark Knight Rises.” The latter would be more fitting since it featured Tom Hardy, co-creator and star of the new FX limited series, “Taboo,” in which the star of “Warrior” and “Mad Max” burns down the world and everyone in it.

Since Hardy is the modern-day embodiment of masculine cool, that would be a fine pitch right there; plenty of series have been built on less. However, while “Taboo” may prioritize style over depth, the result is an addictive, slow-burn story, and a damn entertaining journey. “Taboo” (which Hardy created with his father, Chips Hardy, and frequent collaborator Steven Knight), is set in 1814 London, when Great Britain and “the 15 United States of America” negotiated an extended boundary between the U.S. and Canada. The powerful East India Company (representing the British monarchy) wants to control trading routes on both coasts of America, and in their way is James “Jimmy” Delaney (Tom Hardy), a man long thought dead. Although he vanished into the wild and treacherous plains of Africa years ago, he’s returned for his father’s funeral. One of his father’s few remaining holdings is an island, one that was to be sold to East India before James showed up, and both sides refuse to let go.

James won’t hear offers, even when Zilpha (Oona Chaplin), the half-sister he loves (in taboo fashion), pleads with him to reconsider. Stubbornness slowly turns to passion, which steadily moves toward fury, as James’ backstory unspools and his motivations become clear.

“Taboo” is a delicious tale of retribution as we watch a son honoring his father while taking revenge very, very personally. Jimmy would be ready to protect that island even if his father hadn’t given it to him in death, but the writers double, triple, and quadruple down on the personal war waged between Delaney and his country by hinting at multiple secrets in Jimmy’s past. The show’s creators keep stacking up good reasons for James to go on a killing spree, including his treatment as an “unstable” animal. (He accepts other cultures. What other evidence do you need?) Listing them all would spoil the fun of the premiere, which sets the stage for at least one brutal act in Episode 2 that, by the time it goes down, is as shocking as it is immensely satisfying. “Taboo” is a period drama that relishes its cutting and incendiary dialogue as much as the crudest details. Horseshit cakes London’s cobblestone streets, characters spout period-appropriate racial epithets, and despite its FX platform, f-bombs and swear words go un-bleeped. Even Jimmy’s inexplicable choice to walk around with his thick coat unbuttoned feels like a clever manipulation of a well-known environment to make it intimidating, masculine, and, yes, damn cool. It’s an aggressive, fearless, and periodically nasty story filled with men who Delaney wants to kill, and told in a fashion that makes waiting all the more entertaining.

What suffers is what typically gets trampled in period stories told by men (and for men): the women. Every female character in the first three episodes is either a prostitute or overtly sexualized. Either way, they’re subservient to James’ story, if not to other men as well. Zilpha gets the most screen time of four named women, but her motivation is the least clear (especially with a husband as cartoonishly evil as hers). Later, another actress emerges who might balance the gender equality scales, but by the end of Episode 3 that’s far from certain.

READ MORE: Beyond ‘Generation KKK’: 30 Shows That Were Canceled Before Their Premiere

Proponents will argue the series is simply remaining true to the time period, or posit that the despicable male characters (outside of James) make the female characters stronger by comparison. After all, these women aren’t simple enough to be saints, nor powerful enough to commit the dastardly deeds of the opposite sex. They are merely trying to survive, as best they can, in a world that’s built to beat them down.

I don’t buy it. Perhaps if “Taboo” commits to its title and explores what separates societal and moral sensibilities, it can also serve as a testament to the patriarchy’s historical roots. But it’s not a particularly strong ensemble drama when gender is removed from the equation. Villains are clearly villains. Supporting characters are there to do just that: support James. And one man takes prominence over all the rest.

From Hardy’s star turn in the premiere’s opening moments to the final frames of each episode, “Taboo” is about Tom Hardy, James Delaney, and little else. While the first three episodes introduce taboo topics like race relations, treason, love, sex, and even cannibalism, so far “Taboo” has more to say about being cool than any other topic. This story isn’t trying to be anything more, and that’s fine by us — for now.

This Article is related to: Television and tagged Taboo, Tom Hardy, TV Reviews