TCA: Morano's cinematography expertise is a major part of one of 2017's most anticipated dramas, about a young woman trapped in a dystopian nightmare. 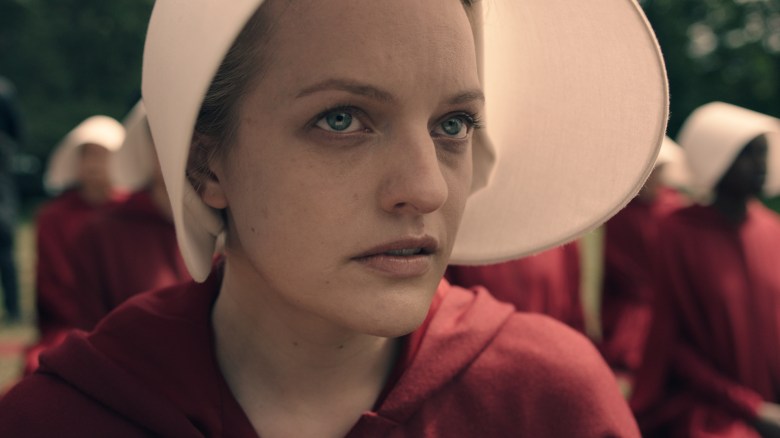 Elisabeth Moss as Offred in “The Handmaid’s Tale”

How do you turn one woman’s inner narrative into something visceral? Especially when that woman is describing the horrific dystopia in which she’s trapped? That’s the challenge director Reed Morano faced when she took on Hulu’s upcoming adaptation of “The Handmaid’s Tale” — and it was one that she relished.

“I just pitched the craziest ideas I could,” Morano told IndieWire on Saturday at the Television Critics Association press tour.

Showrunner Bruce Miller described the series, set in a dystopian world that subjugates women, as a “thriller.” But it’s also an intimate depiction of life in this terrifying world, told almost entirely from the point of view of Offred (Elisabeth Moss), a young woman forced essentially into sexual slavery.

Margaret Atwood’s original novel lives entirely in Offred’s head, making the story a tough challenge for adaptation. Fortunately, the director behind the ambitious series’ first three episodes was well-equipped to make Offred’s story a visual one.

Morano’s credits as a cinematographer stretch back to 1999, and recently she has DP’ed indies like “Kill Your Darlings” and “The Skeleton Twins,” as well as episodes of “Looking,” “Vinyl” and “Divorce.” Most importantly, she also did some lensing work on Beyonce’s “Lemonade.” But Morano moved into directing after taking on her first feature film, “Meadowland,” and “Handmaid’s Tale” presented her with a special opportunity. “I was really excited to get a pilot because I knew I could put me into it more,” Morano said. “It was wild, the things that I was pitching, but I also think it was what [the producers] wanted — they wanted it to be wild and weird and unique. So I was just like, I’m going to go push the boundaries as far as my producers and MGM will let me.”

Her first step was finding a DP who wouldn’t necessarily share her exact sensibility, because “there are things I bring to the table and there are things he brings to the table.” The “he” in question was Colin Watkinson, whose credits also include Tarsem Singh’s “The Fall” and just-premiered “Emerald City.” But while Morano thought that his style was very different from her own, once they started working together she discovered that “we love all the same things.”

“Still,” she noted, “what was so fun about moving from cinematography into directing was that you get the opportunity to see these other cinematographers do things their way. And I also know how a cinematographer wants to be treated by a director, so I was very sensitive to that, and our collaboration was really a true collaboration.”

Morano had a complicated approach to the show’s overall look, but one that made a lot of sense. “This world’s so weird that I wanted it to feel as real as possible, and at the same time I also wanted to accentuate the heightened, bizarre vibe,” she said. “So what I pitched to everybody is this combination of these very strict composed frames that are sort of unnerving, almost inspired by Kubrick.” But for the flashbacks that pepper the series, Morano wanted to “give the audience a breather with some more impressionistic camera that feels verité, feels loose. I always feel like memories are these fleeting moments in your mind, so how do you capture that visually? Well, you don’t see every word that the person said. You just like remember details.”

Another major choice was the decision to shoot a great deal of the show with extreme wide lens close-ups on Moss’s face — to the point where, during the TCA panel, Moss said that “it literally was so close that I couldn’t move my head forward, or I would have hit the camera.”

The reason for that, Morano said, was that “it’s a POV show… so I felt like the way that we get closest to her and into her mind and feel like we are there with her in Gilead is if we are right up in her face. And I think always the wider lens makes you feel like you are physically uncomfortable.

“They glued the camera to the front of her bonnet, basically,” she added.

Backing Morano up was executive producer Warren Littlefield. “In editorial, Reed’s given us choices,” he said. “That intimate footage, particularly with [Elisabeth Moss], it’s just telling us we want to be there. We want that intimacy.”

While this world that Offred lives in is a bleak one, it does feature some pops of color — literally,  inspired by the saturated world of technicolor. The colors red (worn exclusively by women classified as Handmaids) and blue (worn by the Wives they serve) are hugely important to the story, and as Morano explained, “We shot it on [the digital camera system] Alexa. So I knew that there were certain shades of red and certain shades of blue that just don’t work very well in the digital color space. And there’s also shades of blue and red that complement each other very well.” Those shades, it turned out, were the predominant colors to be found in the classic Technicolor film process. Using those particular hues “make an image more rich and more painterly, and almost maybe echo a different time,” Morano said.

The attention to detail when it came to color even haunted the post-production process. “It’s a very particular color grade that we were doing with Ben Whaley, our [digital technician],” she said. “Poor Ben — he had Colin in one ear and me in the other, two D.P.s basically. But in the end Ben and Colin found a great color grade and it gives a richness to the colors, allowing them to be vibrant. The plan that Colin and I had going into the D.I. was to let some colors pop more than others in the frame. Especially the colors that are more important than others.”

As seen in the trailer below, there’s a richness to the resulting look that makes “Handmaid’s Tale” one of IndieWire’s most anticipated series of the year. Morano admitted that she was sad to have only been able to direct the first three episodes, but there’s always a chance for more in Season 2. And in the meantime, she said that “I got a really fulfilling experience out of it.”

This Article is related to: Television and tagged Hulu, Reed Morano, TCA 2017, The Handmaid's Tale