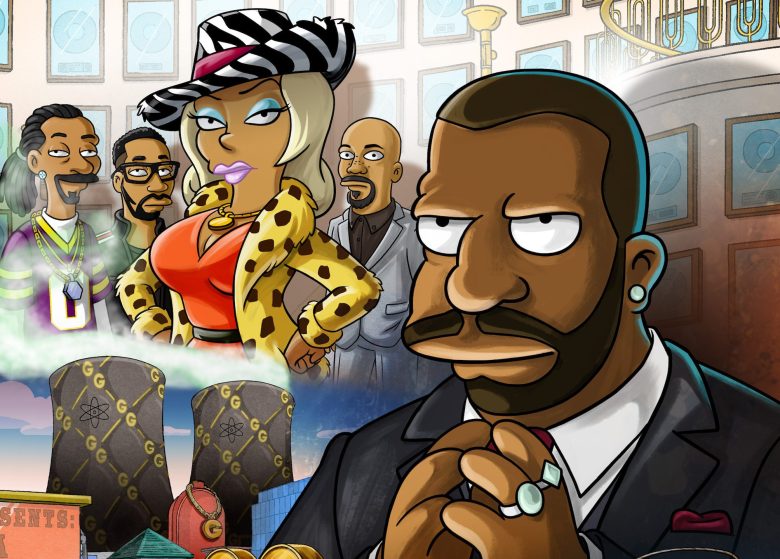 “The Great Phatsby” episode of “The Simpsons”

“The Simpsons” finally came up with its first-ever one-hour episode by accident.

In the episode, “The Great Phatsby,” Mr. Burns becomes pals with hip-hop mogul “Jay G,” who ends up conning him out of his fortune. It began as a regular episode, “but in the spirit of excitement and impulsiveness and exuberance, we expanded it to an hour-long after the table read because it had gone so well,” said executive producer Matt Selman.

“Empire” had launched as a mega-hit, and the feature “Straight Outta Compton” had just been released, when “The Simpsons” team were developing the episode. It was in that zeitgeist that the show’s producers were inspired to fully embrace the genre.

“We had never done a hip-hop episode to this degree,” Selman said. “It’s embracing the spirit of excess so commonly found in hip-hop lyrics. It’s a Mr. Burns episode. He learns the joy of living large and flashing the cash like a rap mogul.”

As the episode grew, so did its ambitions. Taraji P. Henson was brought on to play a version of her “Empire” character Cookie – this time as “Praline,” the mogul’s ex-wife who helps Burns exact revenge.

“She was super fearless and funny about making fun of Cookie,” Selman said. “She gave us a Cookie-r version of Cookie. Her character bursts in like a fireball of chaos and mixes everything up. She was so fun and had tons of ad-libs. We’re putting in everything we could that she was saying.”

Keegan-Michael Key plays rapper Jazzy James, who also helps Burns, while Snoop Dogg, Common and RZA join in on the fun as themselves.

“We knew we had a little extra time in the show, and we thought, who are the iconic figures that could be the Mount Rushmore of rap?” Selman said. “Their parts aren’t huge but they’re along for the ride and they all lead up to the ultimate revenge rap.”

Producer Jim Beanz, whose credits include “Empire,” came up with the music for the show, including several original rap songs.

“He helped give the whole episode a more layered score than usual,” Selman said. “It’s playful with singers and beats. If you’re doing an hour, you have to keep viewers’ energy up, and music is a great way to do that. He’s been sleeping in his studio to put together the sounds for this show. It’s really cool to watch.”

If there was one rule to the episode, it was that none of the regular “The Simpsons” characters, including Mr. Burns, would actually rap. “There’s no ‘Do The Bartman 2017,’ no Mr. Burns as a rapping grandpa, no Marge squeak rapping,” he said.

The whole episode is also an homage to F. Scott Fitzgerald (and Baz Luhrmann’s version of “The Great Gatsby”) – including the story of unhappy billionaires and the Springfield version of the Hamptons. Even “B” storylines with Marge and Lisa “feel like Fitzgerald short stories, about class and romance,” Selman said.

Selman promises that the episode’s ending “is as good as anything F. Scott Fitzgerald ever wrote… if we had planned this it wouldn’t have been as fun or as crazy. This was an out-of-control freight train that you had to just guide into the station.”

Here’s a first look at a poster for the episode: This Article is related to: Television and tagged Empire, Keegan-Michael Key, Taraji P. Henson, The Simpsons