Indigenous artists give voices to the people who have traveled back and forth for thousands of years, reminding the world that being Indigenous does not stop at a border. 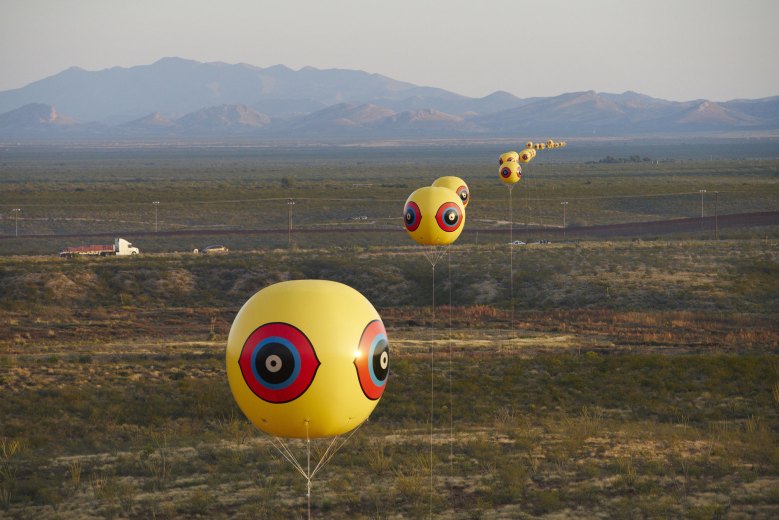 With the ongoing discussions about Donald Trump wanting to construct a wall between Mexico and the Unites States, Sam Wainwright Douglas’ latest documentary, “Through the Repellent Fence: A Land Art Film,” is more relevant than ever.

The film follows Postcommodity, an interdisciplinary arts collective comprised of Raven Chacon, Cristóbal Martinez and Kade L. Twist, who put land art in a tribal context. The group bring together a community to construct the Repellent Fence, a two-mile long ephemeral monument “stitching” together the US and Mexico. The documentary shows how in 2015 they were helped by people on both sides of the border to install a series of 26 huge inflatable spheres emblazoned with an insignia known as the “open eye” that has existed in Indigenous cultures from South America to Canada for thousands of years.

IndieWire has the exclusive trailer for “Through the Repellent Fence,” which shows how the spheres were evenly spaced apart and extended north and south of the border to create a “metaphorical suture stitching together cultures that have inhabited these lands long before borders were drawn.”

“I wanted to make this film to dispel the misconceptions about the US-Mexico border and to add nuance to the narrative,” stated Douglas. “Life in the borderlands is so much more complex and richer than the mainstream media and most of our politicians seem to understand. This is a border story that has not been told: Indigenous artists giving voice to the shared history of Indigenous people who have traveled back and forth for thousands of years, reminding the world that being Indigenous does not stop at a border. The art they created is beautiful, participatory and brings people together. It’s an art project at its finest, invigorating the public, finding common ground and reinforcing the bond between people and place.”

READ MORE: Sudden Impact: How Sundance Documentaries Have Gained (or Lost) Relevance in the Trump Age

The film also features Chris Taylor of Texas Tech University’s Land Arts of the American West program, writer Lucy Lippard and Matt Coolidge of the Center for Land Use Interpretation. The documentary is produced by Jeffrey Brown, David Hartstein and Julianna Brannum.

Douglas’ previous directing credits include “Honky Tonk Heaven,” which premiered and won an audience award at last year’s South by Southwest, and “Citizen Architect: Samuel Mockbee And The Spirit Of The Rural Studio.” He’s also co-produced “No No: A Dockumentary” and “Ladonna Harris: Indian 101.”

“Through the Repellent Fence: A Land Art Film” will have its world premiere at The Museum of Modern Art’s 16th annual Doc Fortnight film festival on February 18. For more information, click here. This Article is related to: Film and tagged Trailers