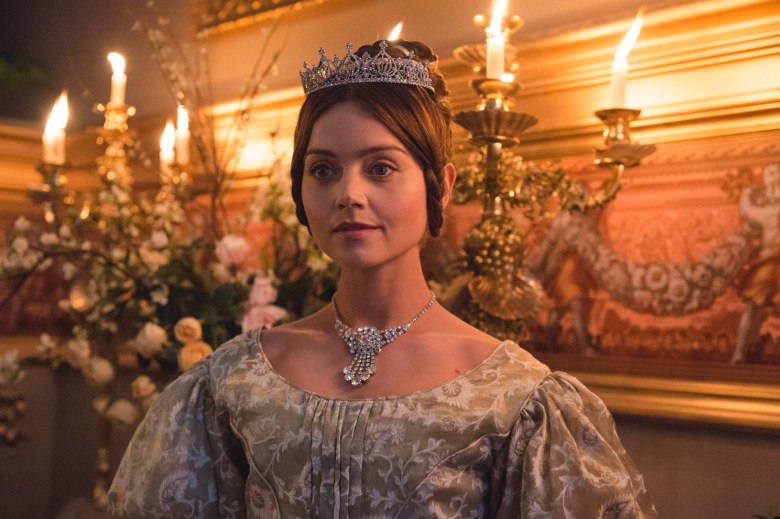 On the heels of “The Crown’s” win at the Golden Globes, the world’s fascination with the British royal family continues unabated. PBS enters the fray with “Victoria,” the tale of the original long-reigning queen who is the great, great grandmother of the Queen Elizabeth we know now.

Starring “Doctor Who” alum Jenna Coleman, “Victoria” traces the monarch’s time from the age of accession at 18 through her long and tumultuous reign that included her passionate marriage to Prince Albert, increased expansion of the British Empire, and becoming a national icon.

Coleman exited “Doctor Who” after two tours with the time-traveling alien. At a sit-down interview with IndieWire last summer, she admitted that going back to TV right away wasn’t her plan.

“I was quite determined to not do another TV series for a while,” she said. “And then this came, I said, ‘Oh no!’ [laughs] It’s messed all my plans up. But it was un-turn-downable really. The more you uncover about her, the more fascinating she is.”

Although Anglophiles who’ve seen Emily Blunt’s turn in “The Young Victoria” and historians might be more familiar with the queen in her youth, most of us can’t shake the image of the older, staid and rather forbidding woman seen in the photos. “It couldn’t be further from the truth,” said Coleman. Victoria was a fiery and strong-willed woman who flouted tradition and authority from her very first act as queen. This, despite her mother’s best efforts to curtail Victoria’s power and spirit. Under what was known as the Kensington system, Victoria had to abide  by a set of strict rules designed to make her weak and dependent on her mother the Duchess of Kent (Catherine Flemming) and her attendant Sir John Conroy (Paul Rhys), who would effectively rule through her once she became queen.

From the moment she inherited the throne, however, Victoria started ignoring their advice and separating herself from their influence. Taking on an adviser who wasn’t Conroy, moving the family and staff to Buckingham Palace, not sleeping in the same bedroom as her mother, and putting her mother in a separate wing altogether were no mere acts of teenage rebellion, but declarations of independence and intent.

Victoria also literally made a name for herself when she decided not to pick a conventional English regal name like Anne or Elizabeth for her monarch name, despite Conroy’s prompting. “She had an iron will. The fire in her and the strength in her is remarkable,” said Coleman. “With [only] the help of her governess and her dog Dash, to not give up power for a regency and go against her mother at that age, in that world, at that time, with so many men and people coming into her life telling her what to do… it’s unfathomable. I think that is the key to her really. It tells you everything about how her and the way she lived the rest of her life.”

It’s just as well she was stubborn and knew her own mind. Besides the sexism Victoria encountered from her own government, she also had to contend with their perception of her as a child who had no ability to rule. The Kensington system way of being raised coupled with her short stature — Victoria was only 4-feet-11 — made her appear childlike.

“The throne that she inherited was too big for her. Her feet didn’t touch the floor,” Coleman said. “And she got her own throne made that fit her because the throne [she inherited] she looked ridiculous on it.”

That scene plays out in the series, and when Victoria complains to her adviser Lord Melbourne (Rufus Sewell) that her size makes people underestimate her, he responds, “To me, you’re every inch a queen.”

Coleman can relate. “I’m 5-foot-2, I have a face that looks perhaps younger than it was,” she said. “I think sometimes perhaps it’s difficult if you’re young and you look young and you’re short and someone who’s trying to have a voice in a certain place. It’s an interesting examination I think.” The wardrobe also provided Coleman with other physical clues as to how Victoria was perceived and how she may have felt. “She was dressed like a little girl. She dressed in a lot of cream, puffball-y dresses at first, and my hair was in these plaits,” said Coleman. “I was finding the scenes sometimes more tricky to play during speeches. Then I realized actually how she must’ve felt because I felt like I looked so little and innocent.”

Blue contact lenses also provided Coleman with a more subtle way to connect with her character. “It was Nic [Collins’], our makeup designer’s idea. I looked at portraits and I was like, ‘Of course,’” the actress said. “Now I take my eyes out at the end of the day, and it just does not work the same.”

The most challenging aspect of the queen for Coleman, however, was her voice. Very few recordings of Queen Victoria were made, and those were done later in her life.

“Usually a voice comes to me straightaway. But I found her voice quite tricky to find something that had that youth and exuberance and vibrancy and also had that command to be queen, and to switch in between private and public world. To be stately, be regal but still be accessible. I did a lot of voice coaching. Her speech in particular — usually a voice comes to me straightaway. Usually I start with a voice. Clara was interesting because Clara is me, and I’ve never properly done that before. But the voice for Victoria, again it was focusing in on her being slightly regal. So it’s more of a slightly high NRP [non-regional pronunciation], so it’s quite specific I suppose.

The seven-part “Victoria” makes its two-hour premiere Sunday, January 15 at 9 p.m. on PBS.

This Article is related to: Television and tagged Jenna Coleman, PBS, Victoria