Pixar's "Piper" is the frontrunner, but all of this year's animated short films are emotional experiences. 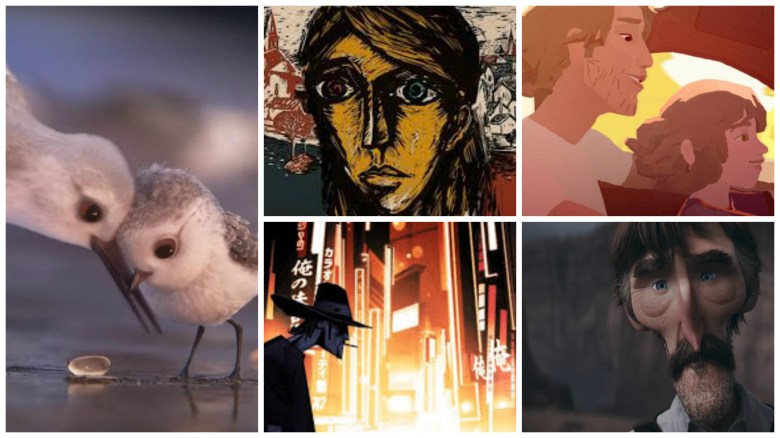 The Oscar for best animated short film may not generate nearly as much attention as other categories, but it strikes an exciting contrast with the more traditional forms of storytelling found throughout other categories.

These films usually celebrate animators from around the world — including a number of up-and-comers — who apply a range of visual techniques and sophisticated concepts only possible in the animated medium. This year is entirely North American, but still features a lot of different approaches — and yet, ironically, the frontrunner in the category is a very familiar name: Pixar.

Fortunately, the company’s latest short deserves the hype. Of course, just landing a nomination helps bring additional attention to these titles, and anyone seeking them out will discover an exciting range of experiences. While this isn’t the strongest list of nominees in recent years, it’s still a sophisticated group rich with memorable images and powerful emotions.

Directed by Pixar animators Andrew Coats and Lou Hamou-Lhadj outside of the studio domain (it was produced by the company’s co-op program), “Borrowed Time” was a viral hit on Vimeo, and it’s easy to see why. The nearly wordless western is the solemn tale of an aging cowboy revisiting a desolate location in the desert where his father died long ago. As the memories rush back to him, the man experiences the traumatic event all over again, and the details are brutal.

The film has the concision of a short story; it’s a precise mood piece that uses the western conventions in service of a moving character study, and hits its emotional beats on schedule. The big reveal is a bit too overly manipulative, and at five minutes, it’s not an especially ambitious feat — especially compared with some of the other entries in this Oscar category — but “Borrowed Time” is expertly designed to make you cry. This Canadian production from director Theodore Ushev is built around a brilliant visual conceit, based on a story by Bulgarian writer Georgi Gospodinov. The parable-like story follows the experiences of the title character, who’s born blind but receives a magical operation that restores her sight. However, she sees two versions of the world — one in the present, and the other in the future. This device leads to a series of gorgeous in-frame juxtapositions: Vaysha encounters a potential suitor and sees him both as a child and a wizened old man; elsewhere, she looks at her home in sturdy condition while also witnessing a post-apocalyptic ruin. The medieval 2-D animation (which resembles linocut prints) creates an entrancing, ancient quality that’s enhanced by the vibrant Bulgarian soundtrack.

“Blind Vaysha” recalls “Sita Sings the Blues” in its ability to render a classic story in richly expressionistic imagery while applying its ideas to the present. The voiceover gets a bit too blunt in the closing moments as it explains the obvious metaphor behind Vaysha’s ailment, but everything leading up to that moment is sheer animated poetry.

At 34 minutes, “Pear Cider and Cigarettes” is longest nominee in this category, and never really justifies its heft, although it’s a strikingly effective approach to turning a personal drama into something more dynamic. Veteran character designer Robert Valley (whose credits include “Aeon Flux” and “Tron: Uprising”) delivers a voiceover narration as he recalls the plight of his disaster-prone pal Techno, a hard-drinking partier who gets wealthy from a serious of accidents by winds up in such poor condition from his drinking that he requires a liver transplant.

The bulk of the movie finds Valley — whose first-person POV dominates the story — heading to China to help Techno deal with a last-ditch effort to save his life. Using a series of high contrast images to evoke the changing environments and Techno’s fluctuating physical state, “Pear Cider and Cigarettes” maintains the grim mood of a neo-noir, with Valley playing the frustrated detective faced with the mystery of Techno’s constant inability to heal his destructive lifestyle.

The ever-present dreariness limits the potential for the tragedy to sink in, since Techno’s such a trainwreck early on and nothing really changes that over the course of the story. Once it’s clear where we’re heading, “Pear Cider and Cigarettes” gets redundant. However, it’s a terrific showcase for Valley’s illustrative powers — the hand-drawn visuals are constantly enthralling, like flipping through the picture book of his regrets about his old friend’s downward spiral. Patrick Osborne’s second nomination after winning for the Disney-produced “Feast” is a history-maker: It’s the first virtual reality production to land an Oscar nomination. Essentially a tender music video, “Pearl” takes place within the confines of a car (making it perfectly suited for the 360-degree VR experience), and finds a single father singing a song to his young daughter as she grows up, has a falling out with her old man and then finishes the song as an adult musician. Set to the touching song “No Way Home” by Alexis Harte and JJ Wiesler, “Pearl” uses a 2D animation style to bring a storybook quality into its decade-hopping tale. There’s nothing especially surprising about the way it unfolds, but the gimmick is an effective means of distilling the inherent emotion of the father-daughter dynamic, and the music carries it through to the point where “Pearl” dares you not to cry by its closing moments. In the earliest eighties, Pixar shook up the animation industry with its initial advancements in using computer graphics to tell stories. With “Piper,” the company once again barges into new territory, showcasing the astonishingly lifelike plight of an adorable young bird learning about the challenges of picking food from the sand in between the advances of menacing waves. While the story’s charming, wordless tale is relatively simple, it’s such a visually engaging means of evoking the animal’s perspective that it pushes the medium into uncharted new territory.

At the same time, “Piper” has a kinship with the delicate narrative styles of Studio Ghibli films (and even shares some attributes with fellow Oscar nominee “The Red Turtle”). It’s a gripping survival story in cute, charming clothing, which is the Pixar touch in a nutshell.

This Article is related to: Film and tagged Pixar, Reviews