There's nothing groundbreaking about the German director's two-hander about a novelist and the object of his affection, but the actors know what to do with it. 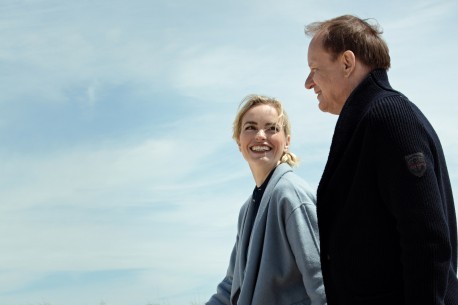 Volker Schlöndorff’s “Return to Montauk” speaks from both sides of its mouth telling two very different tales. Hear it one way, and you’ll get a story of time and regret, an august Euro-drama that asks if love lost can ever be found anew. But come a bit closer, listen past the din, and you’ll hear something entirely different. This time the film is not asking any questions, but flat out saying: Self-delusion is a powerful weapon, and its greatest victims are often those who dare to wield it.

The film’s opening scene offers a helpful key to unlock what then follows. In one long, unbroken take, a man stares right into the camera and tells a story. He speaks of philosophy and of his father, and says that on the older man’s deathbed, he told his son that there are two kinds of regret – regret for the actions we took and regret for the actions we did not. Who is this man? Why is he saying this? More importantly, where is he saying it? Schlöndorff keeps us in the dark for several minutes until he cuts to the reverse shot. We’re in a bookstore, full of well-dressed New Yorkers, and they all begin to applaud.

The man is Max Zorn (Stellan Skarsgård), a Berlin based novelist in New York for a one-week book tour. Even though Max’s wife Clara (Susanne Wolff) has been living in the city for some time, Max has hit the Big Apple with another woman on his mind – his great love, the one that got away, Rebecca Epstein (Nina Hoss). Or did she? As that opening shot makes clear, Max is able to recite fiction without ever having to look down at the page.

Whatever the case may be, he goes for Rebecca – remember what he said about regret, don’t you? Though she continually rebuffs him when he calls her at work, when he visits her at work, when he drunkenly turns up at her apartment one night, she does eventually relent, inviting Max to spend the day with her in Montauk, site of some of their romantic escapes 17 years prior. If it sounds rather creepy as described, the film intentionally downplays it, delivering its middle act with a Linklater-like romanticism as the two former lovers walk along the Long Island coast ruminating about their past, present and future.

It helps that she’s Nina Hoss. The “Phoenix” star once again proves that she’s one of modern cinema’s most beguiling presences, and her already sharp features are arched into 90-degree angles here that cut the arch-sophisticate Skarsgård down to adolescent size.  It’s tempting to read such sequences as the two ex-partners returning to the emotional states of their time together, but I don’t think the twenty-year age difference between the two actors is some casting oversight. The fact that their great affair is explicitly situated 17 years in the past creates real dissonance between Max’s youthful recollections and the fact that he would have already been older than Rebecca is now.

So does the film’s dialogue. The script, from Schlöndorff and Irish man of letters (and “Brooklyn” novelist) Colm Tóibín, gives its two leads mountains of text to recite. Every time writer Max and attorney Rebecca open their mouths, torrents of words pour out. (At one point she admits, “I’m a lawyer – I talk for a living.”) In stark contrast to the romantic reverie, the former couple never talk to one another – they talk at one another, they talk passed one another, a reminder that this epic love story might have always been a lot more flimsy than Max would have you believe.

There are hard limits to this approach. For whatever intellectualized points “Return to Montauk” scores, for the most part, it scores them against itself. Despite the film’s larger aim to subvert the wistful romance genre, it ends up assuming so many of the genre’s characteristics that it just comes off looking like a particularly banal example of one. No matter what the intent, there’s only so much impenetrable speechifying delivered in thick continental accents one film can handle before it comes off as self-serious Euro-pudding.

The film doesn’t help itself on that front by introducing a go-nowhere subplot with Jacques Audiard/Chantal Akerman stalwart Niels Arestup as a French speaking art aficionado, the effect of which only draws screen time from the charismatic Wolff. As the lead’s neglected wife, Wolff cuts a fascinating if frustrating figure, and you wish the film would spend a bit more time teasing out who she is, how she lives, and what she sees in a bore like Max.

“Return to Montauk” premiered at the 2017 Berlin International Film Festival. It is currently seeking U.S. distribution.

This Article is related to: Film and tagged Berlinale 2017, Reviews, Volker Schlöndorff