TV critics weigh in on the shows that may be appreciated in a different way after a glass of whiskey... or other substance. 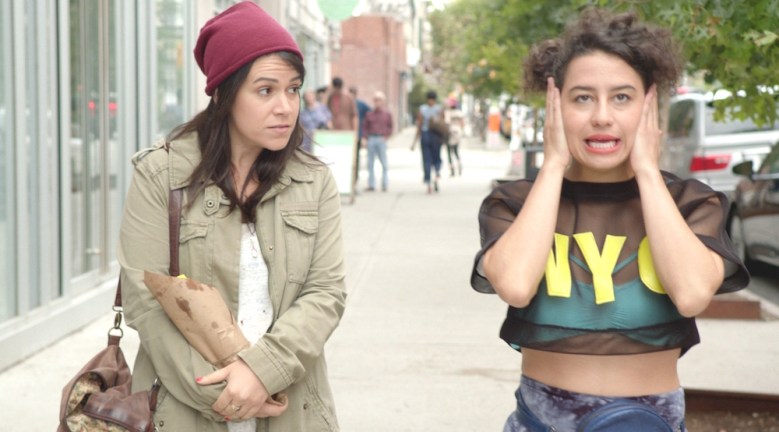 This week’s question: Which is the best show to watch under the influence?

I haven’t, but my friend has. My friend says this is the golden age for under-the-influence television watching thanks to Peak TV covering just about every niche out there, particularly in the alternative comedy arena. It’s like today’s television was made by stoners for stoners! Just look at the great psychoactive-friendly comedies out there right now: “Baskets,” “Broad City,” “Man Seeking Woman,” “It’s Always Sunny in Philadelphia,” “Nathan For You,” “Review,” “Rick and Morty”… just about everything labeled a comedy that airs after 10 p.m. in your basic cable section is made for a specific snacking and snickering demographic. But if you’re looking for that one show that’s specifically designed to be viewed under the influence, I think — I mean my friend thinks — that IFC’s late “Comedy Bang! Bang!” is the dankest, particularly the Reggie Watts era of the show. That was a comedy series that I hear wouldn’t even film a scene if it didn’t make an old person extremely confused. Wacky, irreverent comedy is peaking right now thanks to the abundance of TV and growing acceptance of alternative culture. My friend says.

READ MORE: Which Actress Is Blazing a Trail on TV Today?

I haven’t tested this yet, but everything I’ve heard about “The Young Pope” leans toward it perhaps being enjoyed with some sacramental wine — or hard drugs.

Back in my “heady” college days of University of Houston way back when, I never missed the local stations running late night reruns of UK comedic stalwarts “Benny Hill” with a “Monty Python” chaser, followed by the late great “Tom Snyder Show.”

That was a triple threat of WTAF, silly humor and no-miss great interviews and humor that just seemed to work.

Nowadays, I feel like I need a stiff drink just to listen to the news. So I’ve pretty much ended watching the daily nightly newscast.

Once upon a time I stumbled home from a night of clubbing, turned on Discovery Channel, and spent a few profoundly blotto moments wondering how the producers were able to get such clear and vibrant footage of the dinosaurs lumbering across my screen. Later that day, after tending to my hangover, I decided it was time to ease off the sauce.

Back then I also enjoyed watching “Absolutely Fabulous” while buzzed, and “Chappelle’s Show,” as well as anything on Adult Swim. “Aqua Teen Hunger Force” met my drunkenness with its own loopy illogical humor, as did MTV2’s “Wonder Showzen,” which mimics what it would be like to watch “Sesame Street” while tripping balls. The best part is you don’t actually have to take anything to feel its effects — check out some clips on YouTube to see what I mean. These days, if you were to ask me what you should watch while baked out of your gourd on the miracle that is legal marijuana (organically grown, of course!) I’d recommend tracking down a few episodes of “Black Jesus” or “The Boondocks,” or sinking into a marathon of “Archer.”

This question makes me feel exceedingly square, but, truly, television is far too good to be wasted on inebriation/delirium — that’s what YouTube is for. The closest I’ve gotten is watching “The Great British Baking Show” on a sugar high. An hour of Bakewells, Battenburgs, and soggy bottoms sent me running to the bodega across the street. It didn’t stock the Victoria sponge I was jonesing for, but I polished off an entire packet of Jaffa Cakes while watching the contestants make sticky toffee pudding.

This question reads like entrapment and, on the advice of my attorney, I refuse to answer on the grounds that I might incriminate myself. On the other hand, the best current show about people who are usually under the influence is “Broad City.” Not going to do it. Not going to say HBO’s “High Maintenance,” because it’s a great and sometimes subtle comedy, despite its lead character’s status as a pot dealer to many. Also skipping FX’s “Atlanta” and any other show where characters are often under the influence themselves. I’m going to pick “South Park,” because it offers that mix of bold visuals, raw humor and crazy pop culture references that are the epitome of any great conversation when you’re a little altered with cool people. Also, I would tack Adult Swim’s animated show “Black Dynamite” on that list because it plays like it was written by a pop culture savvy crew who burned more than the midnight oil in their late night writing sessions. Allegedly…

My go-to in college was “Golden Girls” reruns on end, but now I’ll have to say “Bob’s Burgers.” It’s hilarious, yes, but there’s also something weirdly soothing and comforting about Bob, Linda & Co. And if you didn’t already have the munchies, you will after seeing all those burgers.

I’m not sure which show is the best, but there have been a few that certainly invite the viewer to shake up a cocktail while watching. “Californication” was one of the first to make a tall whiskey in a short glass look appealing, and the light and dark moments of a brilliant Season 1 paired nicely with a drink provoking self-reflection. Later years made you want to alter your perception to provide leniency, but it was always a show that celebrated altering your influences, making it fitting to sample a few while watching. “It’s Always Sunny” has a similar effect, even if it’s better appreciated sober. (The satire is often too sharp to allow for including yourself as one of the gang.) But perhaps the best show to watch under the influence is actually a re-watch: “Mad Men” demands contemplation, and while you cannot and should not be drunk, high, or otherwise clouded when seeing it the first time, a Manhattan held just as Don grips his cigarette in the opening titles can allow for fresh thoughts to wash over you as a second, third, or tenth viewing is taken in. Don wouldn’t have it any other way. This Article is related to: Television and tagged Archer, Broad City, Criticwire Survey, The Young Pope