"La La Land" has the popular advantage, but "Manchester By the Sea" carries the gravitas. Split the vote, and it's "Hell or High Water." 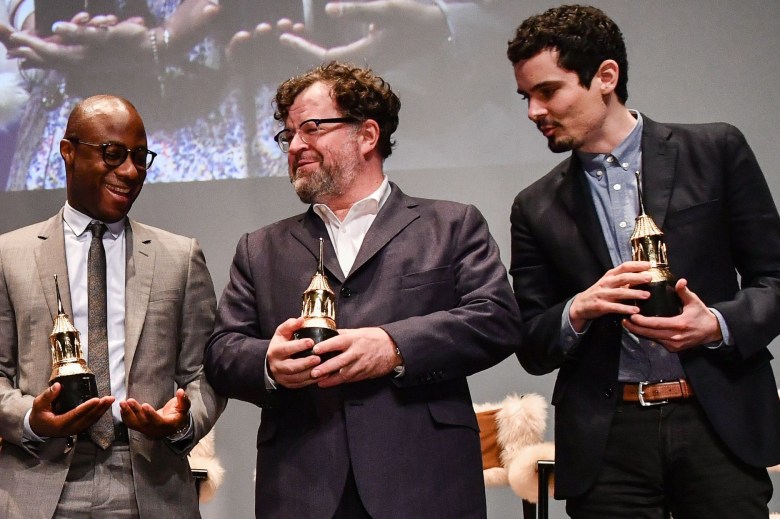 When the Academy moved Barry Jenkins’ script for “Moonlight” to the Adapted Screenplay category, the Oscar race for Original Screenplay became a battle between two writer-directors. While Damien Chzelle’s reboot of the Hollywood musical is a strong contender throughout its 14 nominations, and Oscar voters will tick plenty of “La La Land” boxes on their ballots, it’s still rare for an original musical to land a screenplay win. (Alan Jay Lerner’s “An American in Paris” and Mel Brooks’ “The Producers” are exceptions.)

That’s why lauded playwright and screenwriter Kenneth Lonergan could win this race.

Here’s how Original Screenplay is shaking out: Kenneth Lonergan (“Manchester by the Sea”)

The Oscar could go to the comeback writer-director for his tragic New England family drama.

Lonergan initially struggled with “Margaret” star Matt Damon and John Krasinski’s story idea about a man with a tragic history who must face his past after his brother dies and makes him his son’s guardian. When the first draft wasn’t working, Lonergan changed the nephew from a younger child to a teenager who’s having a pretty good time in high school. And he started over with the material he found most intriguing: the depressed janitor/handyman/mechanic Lee, shoveling snow near Boston.

“He’s in so much distress, he doesn’t wish to function, doesn’t want to connect to anybody else,” Lonergan told me in Telluride. “But he has to, because he’s still connected to his brother and his family. He’s been through a terrible, life-destroying tragedy, but his brother does not allow him to disappear into the void.”

Walking into Lee’s life “forced me to put the past into the flashback structure,” Lonergan said. “That turned out to be a very successful structural correlative to the emotional situation, because he’s someone who’s carrying a block of memories that he can’t live with. And it wasn’t conscious on my part, but it worked out. Sometimes when you just follow what you like, it works out that you are doing something that makes sense.”

Of all the writers in this category, Lonergan is the most respected. He’s a Broadway playwright (“This Is Our Youth”) as well as an Oscar-nominated screenwriter (“Gangs of New York” and “You Can Count on Me”). That could give him the edge. And voters will want “Manchester” to win at least one of its six nominated categories; if Denzel Washington beats out Casey Affleck for Best Actor, and “La La Land” takes home a bunch of statues, this could be it. Given the popularity of this box-office smash ($120 million domestic), it could carry this category, too. After all, the revisionist musical took home all seven Golden Globe awards, including screenplay. Chazelle and Lonergan tied for the Critics Choice original screenplay award, and both have WGA and BAFTA nominations.

After college, Chazelle and his Harvard chum Justin Hurwitz moved to Hollywood to pursue filmmaking, supporting themselves with piecemeal jobs (like horror flick rewrites) as they wrote “La La Land.” “A lot of those ups and downs and frustrations went into this script,” Chazelle told me in November. “It was a musical that combined the magic and sugar of those old Hollywood musicals, but made it feel real and grounded and modern and contemporary. My hope was that through that genre, I could actually say something about being a young artist with huge dreams that don’t feel very realistic. Musicals can actually say a great deal about dreams vs. reality, and how you try to balance the two.”

Like Quentin Tarantino, Chazelle likes to toy with a cinematic language that few filmmakers of his generation know. First, he knocked the audience out their comfort zone by blasting them with a 100-dancer production number, “Another Day of Sun.” “Our hope for the movie is that it would start in the fantasy,” said Chazelle, “and get a little more realistic and intimate as we go until finally, by the end, before the audition number, we go through a long stretch with no number at all and you almost forget you’re in a musical. Then we save our ammo and get back up with the whole epilogue.” Actor-turned-writer Sheridan crafted a modern western that is both an entertaining genre piece and a thoughtful art film that became the highest-grossing independent film of the year ($27 million).

Inspired by the lingering effects of the mortgage crisis, Sheridan tells the story of East Texas brothers Tanner and Toby (Ben Foster and Chris Pine) who are driven to rob several local banks to keep from losing their family ranch, chased by aging Texas Ranger Marcus (Oscar nominee Jeff Bridges) and his half-Comanche, half-Mexican partner Alberto (Gil Birmingham). Sheridan also digs into how and why men fail to communicate honestly with each other.

The writer sees both “Sicario” and “Hell or High Water” as part of a trilogy of “the modern-day American frontier,” he told me in October, “about how much has changed in 100 years, and how much things haven’t. What are the consequences of decisions and actions that are a century old and today? I was exploring the death of a way of life, and the acute consequences of the mortgage crisis in East Texas.”

Sheridan set out to make a “buddy road film which was also a heist thriller, with elements of the inevitable showdown of a western with some of the real consequences of the flawed characters of a real drama,” he said. “I wanted it to feel real. I didn’t want the movie to end and for everyone to go home and forget about it. For me, the greatest thing a movie can do is rivet you while you’re watching, but also give you something to chew on for days and weeks after you’ve seen it.”

The movie only became more timely as the election revealed that these characters reflect the disenfranchised and unhappy electorate that voted for Donald Trump. “This film touches on race, guns, banks, oil, dispossession,” Pine told me. “There are a lot of fault lines of modern America coming together in this narrative, which is on the face of it a cops-and-robbers movie.”

The western landed Critics Choice, BAFTA, Golden Globes, Indie Spirit, and WGA nods, and could drive through to an Oscar win if Lonergan and Chazelle split the vote.

Throwing out conventional narrative, Mike Mills dug into his memories of growing up in a matriarchy in Santa Barbara in the 70s, “trying my hardest not to think of it as film,” he told me in December. “It’s not film structure.”

Trained as a graphic designer, Mills prefers to borrow novelist Milan Kundera’s polyphonic blend of narrative sketches and essays interwoven with the background of characters who “go back in forth in time with different modes of speaking,” he said. “It’s more emotional than logical or linear time. Parts of life don’t fit in a story in a nice way. When they don’t fit, you want more truthiness to them.”

The period details dovetail with his own love of the late ’70s and its music, from The Sex Pistols to Talking Heads. The movie peaks with Jimmy Carter’s “crisis of confidence” speech and a hilarious dinner surrounding the word “menstruation.”

While Mills structures the film as a series of short modules, “there has to be throughline or it dies,” he said. “The piece has to revolve about the mom and Jamie. We need to be talking about them. That ties it together.”

He struggled with nailing down the character based on his mother (Annette Bening), and finally understood that he couldn’t. Dorothea is as semi-autobiographical as the gay father in “Beginners” played by Christopher Plummer, who won the Oscar. “Dorothea was born in 1925,” said Mills. “‘Casablanca’ and Humphrey Bogart helped me to figure out my mom’s voice, anti-authoritarian, funny, and witty. I watched ‘Stage Door,’ where the women are fun and not male-centric. The great menstruation dinner party was me trying to be Howard Hawks.”

The script is nominated for an Indie Spirit award. For their hilarious follow-up to Oscar-nominated foreign film “Dogtooth,” the Greek writing duo dreamed up another crazy world with its own societal norms. All singles are forced to mate; break the law and they’re turned into animals. Our hero (Colin Farrell) is a sad-sack rebel who falls for and runs away with a fellow resister (Rachel Weisz).

As an English-language relationship comedy, “The Lobster” marks a more accessible genre. “I did want to make a romantic film,” Lanthimos told IndieWire’s Eric Kohn at Cannes. “I wanted it to have a real love story. In any case, I would never make a film that was only one thing. Even if it’s my warmest, most romantic film, I still want it to have the more cynical view of things, showing the irony and absurdity of things that we consider normal.”

The writers created a consistent tone from the start, constructing the film as open-ended, full of questions and open to interpretation. “I don’t really have the final answer,” he admitted. “Is there real love and how will you find it and how you will you know?”