Film studies professor Jamsheed Akrami shares some thoughts with the new administration about how Iranian cinema might help them better understand the problems with Trump's travel ban. 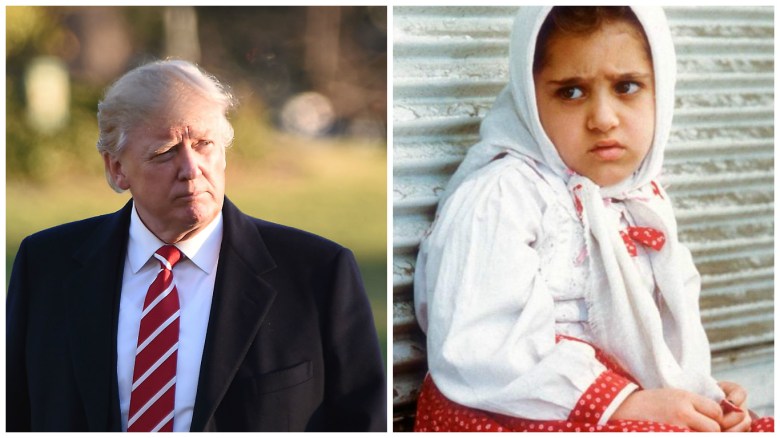 On a recent Saturday, as you were watching your first movie in the White House, an unprecedented wave of protests swept across the country in opposition to your decision to impose a ban on visitors from seven predominantly Muslim nations.

I am not going to focus on the striking irony of foreign travelers being detained in the U.S. airports as you were enjoying Pixar’s “Finding Dory,” the story of a migrant fish detained in this country and aided by aquatic friends of different colors to find her parents.

Instead, I would like to bring to your attention an event of a smaller scale that was eclipsed by the news of the national uproar over your travel ban: the limited opening of an Iranian film, “The Salesman,” inspired by an American play to rave reviews and strong box office numbers.

Of course, there’s nothing wrong with watching “Finding Dory” (although it’s no “Finding Nemo”). It’s a lighthearted movie with a strong message of inclusiveness and cooperation. But I can’t help wondering what would have happened if you had chosen to watch “The Salesman” instead, an emotionally gripping drama by Asghar Farhadi who won an Oscar for “A Separation” in 2012. I would like to think the experience of watching the film might have given you second thoughts about your executive order, as it would have given you a chance to see self-defined images of Iran and Iranians through the lens of an Iranian filmmaker. If you had any compassion, perhaps you would have been shocked to see a vastly different portrait of Iranian society than the perceptions created by the actions of the Islamic Republic — which does not represent the aspirations of its people, or the images constructed by your advisors, who might be severely misinformed about the Iranian people and citizens of the other banned countries. So Mr. President, your order affects people you really don’t know. You are critical of the people who attack you, claiming they don’t know you, even though you are a public figure. How can you inexcusably malign people you’ve never met? Do you consider each citizen of the seven nations to be a “bad hombre?”

We are talking about more than 210 million people, with 80 million of them in Iran alone. You may have problems with the Islamic government in Iran, as they might have with you. But why vilify the Iranian people by branding them as dangerous? Why alienate 80 million people by imposing a ban that not only would not guarantee a higher measure of security but could be an invitation to reciprocity and retaliation? The same argument obviously holds true for the people of the other countries affected by your ban. And if you insist you have no qualms with these people, why have you made no public statements to this effect?

You have a duty to protect the interests of all Americans, including naturalized citizens hailing from the seven targeted nations. I belong to the one-million-strong community of Iranian Americans who call this country home. For us, Iran is the country of our birth, our motherland, and U.S. the country of our destiny, our homeland. We are mostly first and second generation immigrants with strong ties to family and friends in Iran. When you were issuing your travel ban, did you think for a minute that you were effectively depriving millions of naturalized American citizens from being visited by their families? Did a modicum of empathy cross your mind? Did you have a sense of the history of similar exclusionary laws and the sufferings they caused?

One sweeping measure of this nature was the Chinese Exclusion Act of 1882. Does what happened in America of 135 years ago inspire your vision for today’s America?

Thankfully, in a shining triumph for the system of checks and balances, the judiciary branch intervened and the constitutionality of your discriminatory travel ban was challenged by a restraining order issued by Judge James Robard of Seattle’s Federal Court. But that has not deterred you, or your Administration, from fighting for this Executive Order — effectively keeping its dangerous implications in the public eye.

Mr. President, you can learn a lot from watching a few Iranian films. They give you a much more nuanced view of the Iranian people by insightfully demonstrating the realities of their lives and reflecting their hopes and dreams. The films are also moving testaments to how a nation can still proudly express itself artistically under extreme suppression. They will earn your respect. Believe me.

It’s no secret the respect America enjoys among other nations is partly due to how American filmmakers have defined their people and culture for the rest of the world. American movies go a long way to mend the tarnished image of the country caused by the foreign policy blunders of the American governments. Not surprisingly, Iranian films — particularly the ones distributed internationally — function the same way. They offer an image of Iran and its people diametrically opposed to the one crafted and systematically propagated by the Islamic Republic. That’s why socially-conscious filmmakers who attempt to accurately portray Iranian realities are routinely accused by the government of showing the country in a bad light. Consequently, many filmmakers have been imprisoned, banned from working, or forced into exile. The ones working in Iran are subject to incredibly restrictive censorship measures.

READ MORE: Why Asghar Farhadi’s ‘The Salesman’ Should Win the Foreign Language Oscar

Farhadi, the writer-director of “The Salesman” is one such filmmaker. His new film, “The Salesman,” marks his second Oscar nomination. But he would be barred from attending the Oscars ceremony under your new executive order, Mr. President. In the immediate aftermath of the order, the Academy of Motion Picture Arts and Sciences tried to assure Farhadi that they would find a way to bring him over, but to his credit, he declined a preferential treatment in solidarity with his “compatriots and the citizens of the other six countries.”

Do you know who must be delighted by this turn of events? The hardliners in Iran who have been trying incessantly to dissuade Iranian filmmakers from cozying up to Western cultural establishments.

Farhadi’s film draws a thematic parallel between the shattering of the American dream in Arthur Miller’s “Death of a Salesman” and the real life crisis of an Iranian married couple playing Willy and Linda Loman on the stage. As the characters begin to get entangled in an unsettling web of circumstances beyond their control, the viewer develops a stronger sense of empathy with them, shares their anxieties, and faces the same deepening moral dilemma the characters do. “Where Is the Friend’s Home?”

While we’re at it, you might want to check out a few other Iranian films. Try “Where is the Friend’s Home?” by the Iranian master Abbas Kiarostami, who just passed away last summer. The film follows an Iranian village boy doing everything he can to find a classmate so he can return his lost notebook. The similarly-themed “The White Balloon,” written by Kiarostami, shows how a whole neighborhood helps a little girl find her lost money. The director of this film, Jafar Panahi, has been banned from making films and traveling abroad. One of his other films, “Offside,” questions the outrageous ban prohibiting Iranian women from attending sports arenas where men compete. “A Time for Drunken Horses” portrays a family of Kurdish children in a fight for survival. The film’s director, Bahman Ghobadi, had to flee Iran after he made “Nobody Knows about the Persian Cats” — a film about underground music in Iran — without the government’s permission.

Ghobadi develops his films in the United States now. But if your ban is re-imposed, he won’t be able to re-enter the country if he chooses to leave for any reason. Barring Iranian, Iraqi, and Syrian filmmakers whose films are scheduled to be shown in American venues from traveling would deny both them and their American audiences the opportunities for direct dialogue that can enhance mutual understanding.

Did you hear what Damien Chazelle said recently, after he won the DGA award for “La La Land?” Allow me to remind you: He spoke about how much he’s learned from Asghar Farhadi’s films, and emphasized the instrumental role of watching foreign films in shaping his vision as a filmmaker. In addition to U.S. film festivals that routinely invite filmmakers from Iran, many American cultural centers that hold annual Iranian film series would be adversely affected by your ban. In fact, this year’s edition of the series sponsored by the Freer/Sackler Galleries of the Smithsonian’s will be in progress throughout February in the shadow of the White House. Do you think you’d be dropping by to see a movie or two? Several Kiarostami films, including “Where’s the Friend’s House?” will be screened there. I’m sure they’d save you a seat.

Mr. President, please excuse the following tangent. A few days ago, I showed “Fahrenheit 451” to a class I teach on film and civic engagement. This is a film I had screened in previous classes as well, but this time it felt like a very different viewing experience. I was really distressed by the alarming resemblances I saw between the dystopian society depicted in the film and what is happening in our country right now. The constant burning of books and magazines in the futuristic society penned by Ray Bradbury reminded me of the hostility you and your advisors have shown towards the media, to the point of calling them the opposition party.

The authoritarian government in “Fahrenheit 451” monitors its citizens and disseminates, well, “alternative facts.” The use of these alternative facts in the film is most amusing in a scene near the end, where the regime’s security agents, unable to find a suspect, stage a scene in which another man whose face is not shown is killed. The scene is broadcast on the government-monopolized TV and an announcer is heard assuring viewers that “a crime against society has been avenged.”

Watching a dystopian sci-fi movie could have a cathartic effect on viewers under normal circumstances. But what if it were real, Mr. President? Are you at all concerned that the nightmare in “Fahrenheit 451” might turn into a reality thanks to what you and your advisors are doing? If so, you are not alone.

Jamsheed Akrami is a professor of film studies at William Paterson University. His last film “A Cinema of Discontent” is a documentary about film censorship in Iran.

This Article is related to: Film and tagged Asghar Farhadi, Donald Trump, Iran, The Salesman