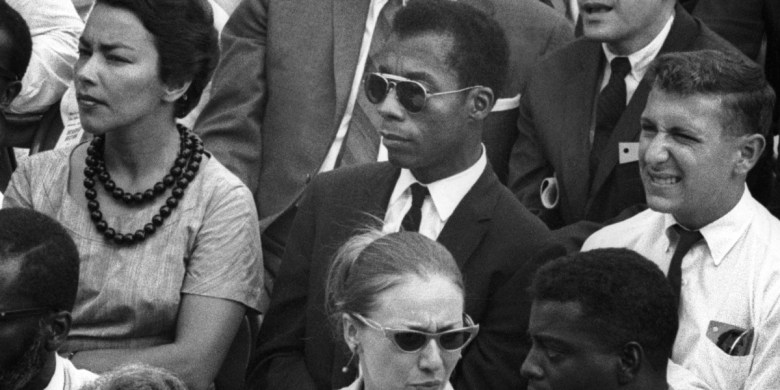 There’s a remarkable cut in the opening minutes of Raoul Peck’s “I Am Not Your Negro” that instantly transforms this insightful cinematic essay into the most important movie of the year so far.

It’s the late 60’s, and James Baldwin appears on “The Dick Cavett Show” to explain his views on black life in America. “The real question,” he says, “is what’s going to happen to this country?” Peck abruptly shifts to the present, assembling a collage of images from black protests against police violence, set to the boisterous rhythms of Buddy Guy’s “Damn Right, I’ve Got the Blues.” That complex fusion of times, places and feelings yields an angry rallying cry that also functions as a lamentation of historical struggle, and it continues for the next 90 minutes. Peck doesn’t just resurrect Baldwin’s words from a contemporary perspective; he reignites their sense of purpose.

“I Am Not Your Negro” operates on many levels at once: It’s not only a fresh vessel for Baldwin’s own analysis of black life in America, but a platform for his assessment of other great thinkers who informed his views.

Peck, an undervalued Hatian filmmaker who has shifted between narrative and documentary projects for nearly 30 years, uses a remarkable foundation for this sweeping exploratory piece: a 30-page manuscript Baldwin wrote in 1979, as part of an uncompleted book project that delved into the lives of Medger Evers, Malcolm X, and Martin Luther King, Jr. All three activists died before they turned 40; Baldwin worked alongside, then outlived, all of them.

“I Am Not Your Negro” is currently an Oscar nominee for best documentary (it received an awards qualifying run in late 2016, but opens in wider release this week), alongside “O.J.: Made in America” and “13TH,” with which it shares some concerns. This trio of moves present a complex statement on the evolution of racial barriers that have plagued the country over the past century, and the impulses that keep them in place, but “I Am Not Your Negro” casts the widest net. It breezes through Evers’ galvanizing activism, King’s calls for peace and Malcolm X’s calls for violence without favoring any of their approaches, instead finding a fluid connection between the sources of all three perspectives. From Baldwin’s perspective, such outspoken strategies elucidated the collective alienation of black America in a white society reared on groupthink. There are moments when Peck attempts to express too many ideas at once, risking the possibility of muddling the clarity of Baldwin’s prose. More often than not, however, he delivers a grandiose statement on African American identity and the feelings of marginalization that have coexisted with it.

When Baldwin himself doesn’t appear in occasional clips, Samuel L. Jackson voices the writer in a recurring narration, pulling back on the hyperbolic Samuel L. Jackson cadences that have become a national punchline to give Baldwin a quiet, meditative presence throughout. Peck’s ample use of archival imagery alongside contemporary voices recalls “The Black Power Mixtape,” which provided a similar overview of imagery from the civil rights era in a modern context.

But “I Am Not Your Negro” goes beyond the limitations of a historical rumination, fusing past and present into a fascinating statement on national identity. “The story of the negro in America is the story of America,” Baldwin states, and Peck proves it, with a nonlinear approach that pairs pivotal moments with fictional representations to show how even the absence of black identity in popular culture invokes its struggles. Despite their different approaches, Evers, King and Malcolm X all tap into the disconnect between the notion of progress and the ignorance of a white-dominated society incapable of comprehending the frustrations of other races.

READ MORE: ‘I Am Not Your Negro’ Teaser Trailer Draws Direct Line From Civil Rights Movement to #BlackLivesMatter

Within the confines of a five-minute stretch, he veers from clips of Rodney King riots to Ferguson, Billy Wilder’s “Love in the Afternoon” and Gus Van Sant’s “Elephant” — with Jackson’s whispered narration as the key linking device — addressing both the frustration driving black activism and the broader systematic dysfunction that has marginalized issues of race in society. Peck’s dazzling approach never slows down, but maintains a clarity of vision that’s enthralling and provocative without turning into didacticism.

By the end of “I Am Not Your Negro,” Baldwin’s words have transcended the boundaries of their era and become timeless, functioning as both a celebration of cultural survival and a warning that the battle for its survival won’t stop anytime soon. “Not everything that is faced can be changed,” Baldwin writes. “But nothing can be changed until it is faced.” Peck’s great accomplishment with this mesmerizing achievement is that he pays homage to his subject with a work in tune with that call to action.

“I Am Not Your Negro” opens in limited release on February 3.

This Article is related to: Film and tagged I Am Not Your Negro, Raoul Peck, Reviews