The former web series does right by the mockumentary genre on Viceland, delivering zany nostalgia for everything from "Jurassic Park" to "Seinfeld" via two best friends who just want to be in a band. 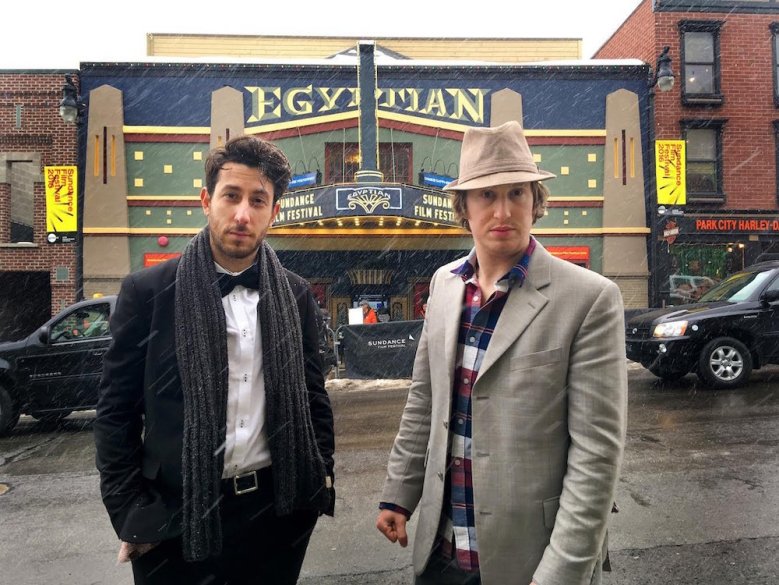 Before we dig into the shotgun blast of comedy delivered in “Nirvanna The Band The Show,” an overview is needed as to what, exactly, this new Viceland comedy is about.

More pressing than usual given its purposefully confounding title, let us start by saying the show has very little to do with Kurt Cobain’s ’90s grunge band. A few bars of “Smells Like Teen Spirit” play right before the credits roll, but that’s pretty much the only direct connection to Nirvana. “Nirvanna” does follow a pair of musicians– Check that: It follows two members of a band that’s never played any music, but nonetheless wants a gig and will do anything to get one.

The 30-minute “semi-scripted” series tracks two Toronto-based roommates and best friends played by co-creators Jay McCarrol and Matt Johnson, whose schemes to play The Rivoli make up the basis for individual episodes. Whether it’s unique self-promotion or innocent trickery, Jay and Matt have endless ideas as to procuring their concert spot…other than learning any music. Conveniently enough, Jay plays Jay and Matt plays Matt, kicking off a string of reality-bending devices the show whips through with manic speed and sheer glee.

Shot in cinéma vérité style with Borat’s knack for utilizing unsuspecting non-actors, the mockumentary incorporates the occasional direct-to-camera address, more than its fair share of meta humor, and a long run of indiscriminately integrated homages — or so it may appear. While nods to “Jurassic Park” and “Home Alone” may seem arbitrary, each episode follows a theme established by musical cues, plot points, or random (often inaccurate) interpretations of film or TV scenes meant to offer insight into the characters and help guide us through their wild escapades.

Take the pilot: “The Banner” starts off simple enough, as the two try to decide how to get noticed by the The Rivoli’s staff. When they call them up to ask, they’re told “Nirvanna The Band” can’t be booked because there’s no evidence they even exist. Rather than hear what they’re really saying — “Show us your work” — Jay and Matt hear, “All we need is a photograph of the band.” This sends them on an escalating excursion of insanity, first trying to dress the part, then get their photo taken, and finally displaying their photo in such a way that noticing “Nirvanna The Band” is unavoidable.

It’s a mad dash from start to finish, both in the quickly paced manner the episode is presented and as the two men literally run in and out of real-world locations. Because of their general sense of urgency, carefully chosen words, and authentic reactions from people who don’t seem like actors, one gets the sense Jay and Matt are not supposed to be doing what they’re doing, both as characters and filmmakers:

They hand their band package to a waiter at the restaurant, rather than going inside the concert venue itself. They do the same with their photo, only to have it thrown on the grown when a random woman decides she doesn’t need a picture of two men she’s never met kneeling next to one another. They keep making choices that are both foolish and non-committal, one boosting the other’s punchline, and the whole time you’re asking, “Wait. So was that real?”

READ MORE: ‘The Leftovers’: Season 3 Teaser Trailer Promises The End is Near, But Don’t Worry Baby

More outlandish yet innocent actions take place as the episodes progress, but we won’t expose those for fear of spoiling the fun. What matters is how aware McCarroll and Johnson are in regard to the line: As they threaten to truly offend their unsuspecting co-stars, there’s a moral coda (and, at times, a legal one) that shows these two know what’s all in good fun and what’s unforgivable.

Their adventures should lead to some grand behind-the-scenes stories, as the two explain what it was like trying to convince a real police officer to let their barely standing float into a Christmas parade, but the show itself is a good time unto itself thanks to their madcap shenanigans. You feel like you’re living on the edge with these goofballs because the line between reality and fiction is so carefully blurred. Tonally, it may be easiest to think of the Spike Jonze-produced comedy as a serialized, unsullied version of the filmmaker’s MTV franchise “Jackass,” even if such a comparison doesn’t do justice to “Nirvanna’s” narrative ambition. The focus falls on two sweet, well-intentioned idiots, not jackasses, and its construction is far more elaborate than Johnny Knoxville’s antics.

Still, there’s something to be said for the documentary element adding illicit thrills to the story itself. Participation is built in, even when you’re safe at home, watching from your couch. Throw in a healthy dose of nostalgia aimed smack dab at ’90s kids, and “Nirvanna The Band The Show” offers plenty of quality hooks for curious viewers. So stupid it’s smart and contagious in its propulsive mojo, the series aims to entertain us. And it does just that, for all the right reasons.

This Article is related to: Television and tagged Spike Jonze, TV Reviews, Viceland