The documentary about the unique Miami-Dade boot camp will premiere in late March. 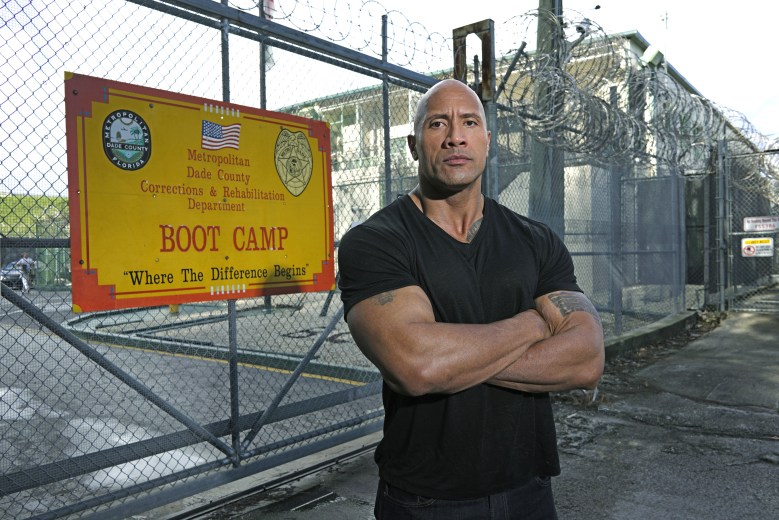 Dwayne “The Rock” Johnson, “Rock and a Hard Place”

“You don’t feel it right now, but you’re lucky. You’re lucky because you’ve got another shot. Don’t fuck this thing up. I mean that.”

When Dwayne “The Rock” Johnson, the nicest guy in the world, speaks to you like that, you listen. In HBO’s upcoming documentary “Rock and a Hard Place,” the action star makes an appearance to give a reality check to young inmates who are about to take part in the famed Miami-Dade County Corrections & Rehabilitation Boot Camp.

The boot camp is an essential tool to fight crime: When seven out of 10 prisoners who are released return to prison within three years, it’s clear that jail time by itself is not a deterrent. The Miami-Dade boot camp is a harrowing six-month program that puts inmates through the wringer to shape them up to become constructive members of society. The combination of rehabilitation and punishment is the ultimate tough love treatment that has had an unprecedented success rate with graduates.

Johnson knows from experience what it’s like to be young and on the wrong path. In his troubled teen years, he was arrested upwards of eight or nine times for fighting and theft. He credits his loving family for correcting his course.

“Rock and a Hard Place” will premiere Monday, March 27 at 10 p.m. on HBO. Watch a trailer for the documentary below.

This Article is related to: Television and tagged Dwayne "The Rock" Johnson, HBO