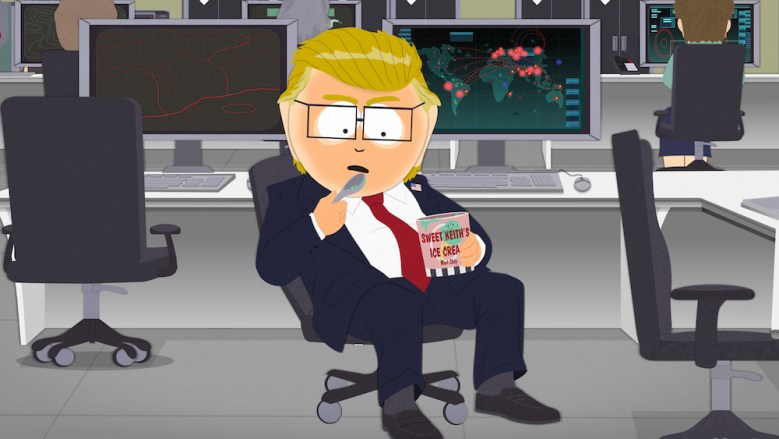 “South Park” co-creators Trey Parker and Matt Stone devoted much of last season to an extended arc lampooning then GOP candidate Donald Trump via the character Mr. Garrison. But now that Trump has become President and the news is moving at a rate faster than Matt and Trey’s writing, the two have said they will “kind of back off” Trump in the future.

READ MORE: ‘South Park’ Finale Review: A Post-Funny Era of Satire Is Not What We Need Right Now

“It’s really tricky now because satire has kinda become reality,” Parker said in an interview with Australia’s current affairs show 7.30. “It’s really hard to make fun of and in the last season of ‘South Park,’ which just ended a month-and-a-half ago, we were really trying to make fun of what was going on but we couldn’t keep up. What was actually happening was way funnier than anything we could come up with. So we decided to just kind of back off and let them do their comedy and we’ll do ours.”

When asked if Trump will lead to a golden age of satire, Stone expressed skepticism. “Well, he’s certainly trying. I don’t know…People say to us all the time, ‘You guys are getting al this good material,’ like we’re happy about some of the stuff that’s happening,” said Stone. “But I don’t know if that’s true. It doesn’t feel that way. It feels like they’re gonna be more difficult…We’re having our head blown off like everyone else.”

Stone and Parker are currently in Melbourne for the Australian premiere of their stage musical “The Book of Mormon,” which won nine Tony Awards in 2011.

The entire 20th season of “South Park” is available to stream on Hulu.