"Rings" will battle for the top spot, while "The Space Between Us" faces a tougher road. 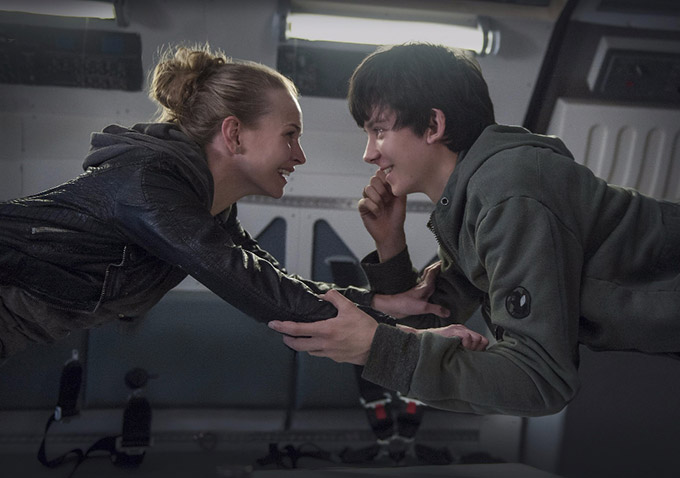 “The Space Between Us”

On the last quiet weekend before elevated titles enter the fray, M. Night Shyamalan’s “Split” (Universal) gets a shot of repeating #1 for the third week, with the only significant contender being “Rings” (Paramount), yet another horror franchise entry.

In addition to “Split,” “Rings” will battle “Hidden Figures,” “La La Land,” and the second weekend of “A Dog’s Purpose” (Universal) for positions among the top six. There’s also “The Space Between Us” (STX), the second science-fiction romance after “Passengers” in under two months. None of these films are likely to bring in even $15 million, and not all are guaranteed to top $10 million. Super Bowl weekend is reliably one of the lowest grossing of the year. Like other weak weekends (post Labor Day, some Halloweens, early December), there’s an element of self-fulfilling prophecy as studios avoid it for top releases. Still, free from direct competition, it’s a viable time to pick up decent holdover business. And for  borderline films that might otherwise struggle, it gives them a chance to shine.

Still, this weekend could be enough outpace three of the last four years. (Out of reach is 2015, when the third weekend of “American Sniper” grossed over $30 million). The difference stems from an unusually strong group of hits already on screen, including the two major Oscar contenders that have now pushed past $100 million. “Rings” marks the fourth sequel of 2017, and the third from a horror franchise (after entries in the “Underworld” and “Resident Evil”). However, this sequel comes more than a decade after “The Ring” in 2002 and “The Ring 2” in 2005 (themselves remakes of  Hideo Nakata’s 1998 and 1999 “Ringu” and “Ringu 2”). Dreamworks’s development of the psychological-scare property stemmed in some part as a response to the success of Shyamalan’s breakout “The Sixth Sense.” (The first English-language remake was an early effort by Gore Verbinski, before he went on to the “Pirates of the Caribbean” films and an Oscar for “Rango.”)

The new rendition updates the original concept (watching a certain video leads to fatal consequences) to the more current iteration (watching certain visual interactive media leads to fatal consequences). This idea isn’t entirely new; in different form, it led to some success for Blumhouse Productions’ “Unfriended” in spring 2015. That very low-budget film ($1 million, compared to $25 million for “Rings”) opened to $15 million; “Rings” is unlikely to achieve the same level of opening weekend. “The Space Between Us”

However, it should rank above “The Space Between Us.” This is STX’s second wide release this year (after “Bye Bye Man”); the studio released only five films for all of 2016. Like many STX films, it has an element of proven talent in director Peter Chelsom (“The Mighty,” “Hector and the Search for Happiness” are among his credits going back more than 25 years), and a cast that includes Gary Oldman and “Hugo” star Asa Butterfield. Nevertheless, advance reviews of this YA PG-13 romance have been almost uniformly awful. A gross of around $10 million would be at the high end of expectations.

READ MORE: ‘The Space Between Us’ Review: YA Goes To Mars In This Weightless Teen WeepieIf “Split” does achieve a third weekend at #1, it would be the first horror-related titled to do so in nearly a decade (the last one was 1998’s “Disturbing Behavior,” starring Katie Holmes). Shyamalan’s breakout smash “The Sixth Sense” managed five weeks at the top in 1997 to a $500 million run (adjusted for inflation). This weekend won’t bring it to $100 million, but it’s inevitable. As “La La Land” and “Hidden Figures” square off as Oscar front runner and possibly leading alternative for Best Picture, respectively, an interesting parallel battle is going on with their grosses. “La La” goes into the weekend with a $2 million lead over “Hidden” in domestic grosses, but the latter might surge this weekend. Both are showing stellar post-nomination results, with a rare case of two leading contenders in the upper levels of Top 10 grosses just weeks before the awards. “Hidden” should stay above $10 million, with “La La” hovering close to it. Canine-centered movie precedents suggest “A Dog’s Purpose” (Warner Bros.) should have a relatively small drop from its $18 million debut. If the response was great after a possibly diminished initial return (due to disputed animal abuse charges), it could actually compete for the top spot in what would be an upset. It doesn’t hurt to have the family audience nearly to itself.

Similar to Weinstein’s “The Founder” and “Gold,” Sony Pictures Classics’ “The Comedian” is the latest film to go on to a mid-range release despite a lack of awards recognition. Directed by Taylor Hackford, Robert De Niro stars as a bitter comic dealing with life after serving prison time for assaulting an audience member. It opens in under 1,000 theaters. In an environment with multiple Oscar nominees competing for ticket sales, this film’s mediocre or worse reviews will be no help. From “I Am Not Your Negro”

“I Am Not Your Negro,” returning after an awards-qualifying run, is now an Oscar-nominated documentary. Tied into its awards platform, Magnolia (releasing the film in partnership with Amazon) is opening this review of author James Baldwin’s outspoken life in the Civil Rights era in over 40 locations initially.

This Article is related to: Film and tagged Box Office Preview, I Am Not Your Negro, Rings, The Space Between Us