Set in Paris, 1947, the Franco-British production is visually and conceptually arresting but doesn't trust in the inherent emotion of its subject matter. 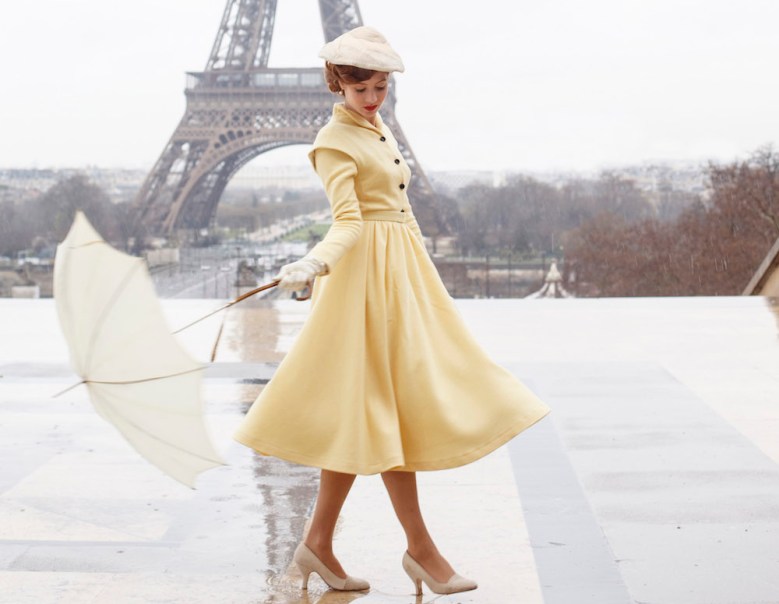 Jenna Thiam in “The Collection”

“Fashion has the power to transform us. It’s not so much about who you are but who you want to be. Even those who hate fashion make a statement with what they wear, if only to say to the world, ‘I don’t give a damn.’”

Such are the wise words by fashion house owner Paul Sabine (Richard Coyle). If only Amazon‘s “The Collection” actually heeded them.

Set in Paris 1947, the atelier Paul Sabine House is tasked by a wealthy and powerful investor with restoring Paris as the haute couture capital of the world. The wartime German occupation of the city, however, has cast a long shadow, and our Parisians are having a hard time shaking off that oppression, the rationing mindset and past decisions.

READ MORE: Studio Ghibli’s Miyazaki — No, the Other One — On Inheriting His Father’s Legacy with ‘Ronja, the Robber’s Daughter’

The world of high fashion set against the backdrop of hardship and scarcity is a concept that should sell itself, but “The Collection” doesn’t put its trust in those materials. Like a rookie designer presenting her very first collection, the series uses a heavy hand and ends up over-accessorizing, over-working the narrative and filling it with far too many intrigues. Why have a perfectly good and fully realized character when you can have that same character, but enhanced with a secret? It’s as if Oprah decided that secrets were one of her Favorite Things this year. Paul Sabine, YOU get a secret! Creative brother Claude (Tom Riley) who does all the designs, YOU get a secret! Pretty seamstress, YOU get a secret! Dedicated chauffeur, YOU get a secret!  At least “The Collection” is equal opportunity in handing out secrets, betrayals and double-dealings. Unfortunately, in its haste to leap to the next story of intrigue, the series doesn’t slow down to allow viewers to process, much less give a damn about what we just saw.

This headlong rush for the next big story sadly puts fashion on the back burner. Oh, there are plenty of shots of gorgeous, intricately made gowns and ensembles that are reminiscent of Christian Dior’s “The New Look” collection of the same era, known for its exaggerated hourglass silhouettes with padded busts and full, swinging dirndl skirts. The few scenes where the clothes take the spotlight are dramatic and stunning, albeit brief. It’s not a shortage of dresses that is the issue, but the fact that the creators don’t give them any power, or allow them time to speak for themselves.

If ever there was a series tailor-made for fashion porn or a love letter to the garment-making industry or letting a character have a transcendent experience with a dress, this would be it. Instead of being able to luxuriate in all that, we get told how important fashion is, which is where we return to Sabine’s quote above. This is not the only time a male character talks about fashion’s influence and the power of a dress. The series spends so much time explaining, and yes, often mansplaining, what women should think about their clothes that the impact of both the women and the clothes are diminished. In the ultimate example of a literal depiction of the male gaze, we meet the plucky American photographer Billy Novak (played with earnestness by Max Deacon), who has the power and discernment to “discover” the allure of seamstress Nina. It’s only because of his urging that she secretly wears one of Sabine’s gown. Through his lens, her beauty blossoms. His directions are essential to her enjoyment of learning to model. “You’ve got to smile more often,” he observes helpfully. Cue female viewers throwing a Louboutin through the screen.

Echoes of Pygmalion aside, Nina’s character has the most potential to be the breakout in this series. Given quiet power by actress Jenna Thiam, Nina begins to show a little life in her eyes and decision-making in her soul by the end of the second episode. The modern French woman has a reputation for putting herself together in the most stunning and understated way, such is her confidence in herself. Perhaps Nina soon will too.

It would be intriguing to see if “The Collection” fans this potential and allows Nina to control her own narrative. For example, we are reminded of a moment in 1957’s Stanley Donen musical “Funny Face” in which Audrey Hepburn’s character (who was similarly “discovered” as a model) directs her own shot to the photographer played by Fred Astaire. “Take the picture! Take the picture!” she exclaims as she breezes down a staircase with her diaphanous scarlet shawl billowing from her up-stretched arms. We need more of that joy, that interaction and initiative between the garments and the women in the series. That is not to say that the men are completely insufferable on the show. Coyle gives weight and passion to the ambitious atelier owner who is hiding a shady past, and is hamstrung by his temperamental brother (who won’t deliver designs on time). Even Billy has his charms, purely because he appears to be one of the few characters without a dark past or ulterior motives. Purity of intent has to count for something.

The jury is out on Sabine’s wife Helen, played by Mamie Gummer, whose talents are wasted so far in the first two episodes. We hope, though, that because Helen is an American, she’ll show some creativity and gumption soon. After all, why should Frances de la Tour as the Sabine matriarch and the demanding models in the atelier have all the fun?

One last gripe: “The Collection” is a Franco-British co-production, and because of that it creates an odd note when it comes to casting. While it’s a time-honored tradition to have British actors play anyone of European lineage, it’s a bit more out of place here where genuine French actors perform side by side with very British people who are supposed to be French. Overall, “The Collection” is a visually and conceptually arresting drama that shows potential — if only it would deliver more on the inherent emotion of its subjects. A designer’s fashion collection tells a story that may range from daytime to nighttime pieces, work attire to leisure-wear. But in achieving this cohesive collection, the designer must learn to edit. And so must this series. It is to be hoped that as the mysteries are unwrapped, these storylines will fall away, putting the focus back on the power of the clothing and how people’s reclaim their lives through this inspiring, artistic medium.

This Article is related to: Television and tagged Amazon, The Collection, TV Reviews