From a night in jail to Dick Van Dyke as a lawyer-turned-clown, here's what’s in store for you when you revisit Dorothy, Blanche, Rose, and Sophia. 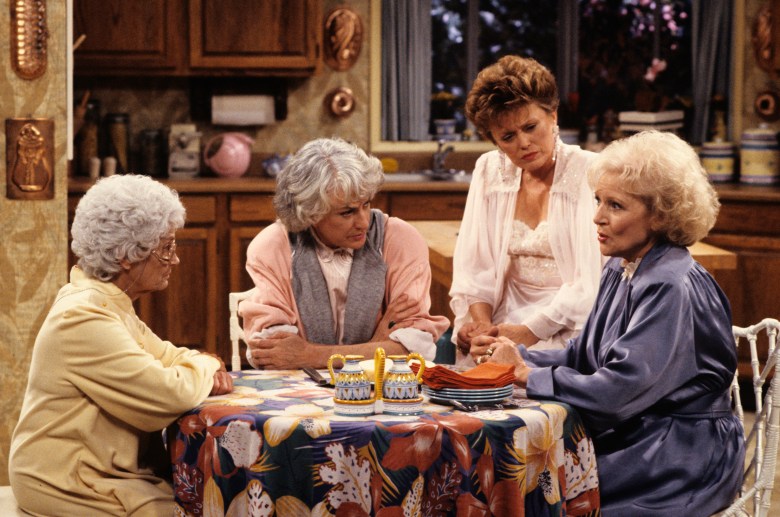 In the gallery above, we’ve picked 29 moments among a multitude from “The Golden Girls,” the ‘80s-‘90s comedy that is available to binge in its entirety on Hulu now. Click through for a rough guide to what’s in store when you revisit Dorothy, Blanche, Rose and Sophia.

READ MORE: Friends of Dorothy: Was ‘The Golden Girls’ Really as Queer-Friendly as Its Reputation Suggests?

Created by Susan Harris, who had also created the controversial but critically acclaimed sitcom “Soap,” “The Golden Girls” was unlike anything America had seen before on TV. It centered on four older women living in one house in Miami, who, despite the gray in their hair (some of it camouflaged with dye), still had plenty of zest for life, sex, and troublemaking.

Based on their performances on “Maude” and “The Mary Tyler Moore Show,” Rue McClanahan and Betty White were cast first. Director Jay Sandrich had suggested to White that even though she had initially read for the role of Blanche Devereaux — the randy 50-something with an eye for the gentlemen — that she switch roles with McClanahan so that she wouldn’t become typecast (as her “Mary Tyler Moore” character was a nymphomaniac). Thus, her wide-eyed version of dimwitted but sweet-natured Rose Nylund was born.

McClanahan was encouraged to bring on her “Maude” co-star Bea Arthur to play the role of divorcee Dorothy Zbornak after Elaine Stritch had fallen through. To play Dorothy’s mother Sophia Petrillo, Estelle Getty was discovered on Broadway while playing the mother character in “Torch Song Trilogy.” In real life, she was just a hair younger than White and Arthur, and thus wore old-age makeup, glasses and a white wig to play the eldest of the group. The series was known for tackling LGBT issues and other topics about sexuality, ranging from Blanche’s gay brother, Dorothy’s cross-dressing brother, a lesbian friend with a crush, impotence, sexual health, and more. In particular, all the women were depicted as very sexual beings who were rarely at a loss for a date, much less a bed partner. This allowed for some entertaining guest stars such as Dick Van Dyke, Cesar Romero, and even Sonny Bono to be brought on as potential beaux.

Except for the occasional cold, flu, or overeating, for the most part nothing could slow these women down. They were known for getting involved in a number of shenanigans like getting stranded on an island during vacation, being jailed for prostitution and performing in a school play dressed as poultry. As if that wasn’t enough, they often had insomnia-driven cheesecake-fueled midnight chats, in which they’d reminisce about their colorful lives.

Through its seven-season run, “The Golden Girls” received 11 Emmy wins, 68 Emmy nominations and four Golden Globes. Each of the four actresses won Emmys for their performances on the show.

After its run, a continuation sans Arthur was attempted, but “The Golden Palace” only lasted one year.  “The Golden Girls” did successfully spin off “Empty Nest,” which in turn spun off “Nurses.”

You can watch all seven seasons of “The Golden Girls” on Hulu now.

This Article is related to: Television and tagged Hulu, The Golden Girls