IndieWire sought enlightenment from the Oscar-winning filmmaker about that encouraging yet enigmatic finale. 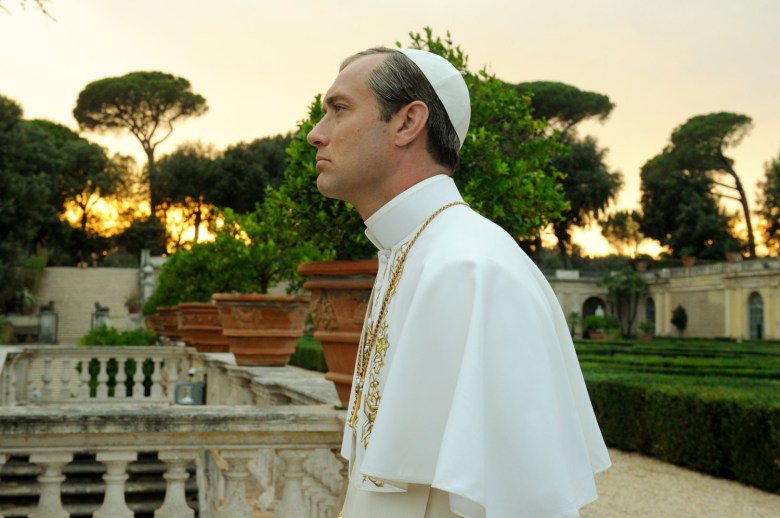 [Editor’s Note: The following review contains spoilers for the first season of “The Young Pope.”]

The finale of “The Young Pope’s” first (but hopefully not final) season was a true test of faith for some fans, leaving them with more questions than they had going into the episode.

Lenny Belardo (Jude Law), aka Pope Pius XIII, finally showed his face to address his flock with the global message to “smile,” but after spying what looked like his elderly parents in the crowd, he collapsed. It is unclear if this event presages his imminent death or if he’ll merely be sidelined while recovering. We’re not even sure if the show will continue another season or if/how Lenny’s future would play out in it. Seeking enlightenment, IndieWire turned to the show’s creator Paolo Sorrentino, who agreed to answer our burning questions.

The Oscar-winning filmmaker acknowledged that he wanted to “create a state of uncertainty” when it comes to Lenny’s fate. As for the camera gradually moving upwards to show an increasingly bigger snapshot  — first Lenny’s surroundings in Venice, then the city itself, Italy, Europe and eventually the Earth from space — Sorrentino said, “I wanted to convey the idea that the whole world was looking at Lenny and that the world was concerned with him alone in that moment.”

That answer may give some reassurance to fans since some have theorized that the soaring point of view may have signified Lenny’s soul leaving is body and ascending to Heaven. That could very well still be his fate, but having the strength of the world concerned with Lenny offers hope that he may pull through.

That caring for the pontiff protagonist in itself is a feat for the show since Lenny first came in as a brash, harsh and somewhat unsympathetic character. In fact, at times he almost seemed like a reality show villain, making outrageous demands for Cherry Coke Zero and declaring that he was “not there to make friends.” Over the course of the 10-episode season, the new pope seemed unbending about his strict enforcement of the rules…until he began to falter. Most surprisingly, Lenny was not sure he believed in God. The Pope was having a crisis of faith. And this, even after he apparently saved his childhood friend’s dying mother through the power of prayer.

“I presume that being able to work miracles is something not reassuring, but something that can scare you and fuel doubts,” Sorrentino explained.

Lenny’s uncertainty about his role also grew after he failed to achieve some of the results he wanted under his papacy. His mentor Cardinal Michael Spencer (James Cromwell) kept trying to encourage Lenny to make some room for new ideas, for leniency and once told him, “You think you are the hinge, but you’re the door.”

Spencer was reminding Lenny of his limitations and proper place. “[He means] that the Pope is still only a spokesperson for Christ. Nothing more than that,” Sorrentino said. Perhaps this is why Lenny practiced some leniency when Archbishop Kurtwell (Guy Boyd) was found guilty of and confessed to molesting children and young men. The Pope allowed Kurtwell to continue practicing as a priest, but relocated him from New York to Ketchikan, Alaska.

“In Catholicism we always have forgiveness,” said Sorrentino. “Alaska and the freezing cold there is still a punishment. The Vatican is reluctant to take away the robes from a priest.”

READ MORE: ‘Broad City’ to ‘The Young Pope’: The Best Shows to Watch Under the Influence — IndieWire Critics Survey

Whether or not we agree with or disapprove of Lenny’s decision, as viewers we eventually started to feel a similar compassion, but this time for Lenny. As a religious leader filled with doubts, he became less remote. As an orphan who still felt the pain of his parents abandoning him, he became human.

By the time Lenny lost everyone else — his childhood friend (Scott Shepherd), his mentor (James Cromwell) and even his surrogate mother Sister Mary (Diane Keaton) who transferred to Africa — we were right alongside him as he clutched his chest from the physical and psychological pain. When Lenny spasmed and crumpled to the ground the second time after glimpsing his parents in a crowd in the final scene, the connection to his first attack was a poignant one. “They are both shocks affecting a weak heart,” said Sorrentino. The series creator has gone through his own journey while making this show. Despite his critical acclaim on the big screen, Sorrentino is modest about his skills, especially when it comes to his first television show. “I learnt, after seven months of shooting, that perhaps I am able to direct,” he said.

It seems that Sorrentino has gotten a taste for TV though, and doesn’t see this season of “The Young Pope” as a standalone project, even though there has been no word on another installment. “I hope it will continue,” he said. “I already wrote the second season in the winter.”

This Article is related to: Television and tagged Paolo Sorrentino, The Young Pope, TV Interviews