In this dispatch from MIT’s Open Documentary Lab, a look at a new virtual reality experience designed to encourage women of color to explore the medium's potential. 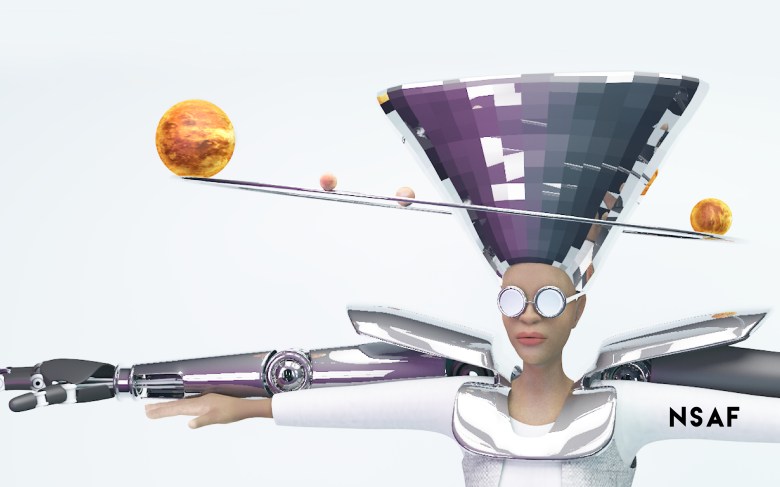 You sit in a pink-hued “neurocosmetology” lab, your feet dangling off the salon chair, tentacle-like electrodes hanging down above you. You’re here for an appointment to get your hair styled—and at the same time, increase the neuroplasticity of your brain.

This is just one piece of the fantastical future envisioned in NeuroSpeculative AfroFeminism, an art installation, in-development virtual reality experience, and ongoing research project that surfaced at this year’s Sundance New Frontier exhibit.

The project is the brainchild of Hyphen-Labs, an international collective of women working at the intersection of art, science, and technology. Carmen Aguilar y Wedge, Ashley Baccus-Clark, Nitzan Bartov, and Ece Tankal have created a vibrant Afrofuturist world in which women of color are leading advances in science, technology, finance, and art.

Baccus-Clark said that a major motivation for the project was to encourage young women of color “who might not necessarily know that these fields are something that they can aspire to, and see themselves in.” The members of Hyphen-Labs themselves stand out as VR creators in a field that is predominantly white and male. They hope to heighten the visibility of women of color, as well as reduce bias by immersing viewers in a positive and powerful representation of black women.

The installation resembles a sleekly futuristic beauty salon. Display tables feature an array of products designed specifically for women of color—from sunscreen for dark skin to a reflective visor intended for use in unfriendly or overwhelmingly white spaces. Produced in collaboration with AB Screenwear, the visor allows wearers to see out, while reflecting onlookers’ gazes back at them. Earrings designed with Michele Cortese can record video and audio of threatening encounters, offering a more secure and discreet option than dash cams or mobile phones. Working with artist Adam Harvey, the team also created a scarf featuring a pattern that overwhelms facial recognition algorithms, letting people avoid unwelcome surveillance—while participating in protests, for example. The projects are all prototypes for now, but the artists plan to eventually produce and distribute them.

When your turn arrives for the VR experience, women in lab coats guide you to salon chairs at the center of the installation. After donning an Oculus Rift headset, you are transported to Brooks’ Salon, a neurocosmetology lab of the future. Seated in a stylist’s chair, you see yourself in the mirror—you’re a young black girl with adorable pigtail hair puffs. The Octavia Electrodes you’re about to receive combine brain-stimulating technology with high-tech hair extensions.

The electrodes—named for pioneering science fiction author Octavia Butler—are a twist on transcranial direct current stimulation (tDCS), a brain stimulation method that delivers low electrical currents to specific areas of the brain through electrodes placed on patients’ scalps. The technique is unavailable to, or unpleasant for, many black women because it’s not designed to accommodate their hair. With The Octavia, Hyphen-Labs imagines a future where cutting-edge technology is created by and for women of color.

Black women consumers of VR, video games, and indeed most media are used to seeing themselves portrayed as marginalized others, or being asked to empathize with yet another white protagonist. In “NeuroSpeculative AfroFeminism,” however, viewers of all backgrounds are transported to a space where black bodies and black culture—past, present, and future—are the default.

As Brooks attaches the electrodes, she warns you that they may cause hallucinations. And sure enough, you are soon floating through an Afrofuturist dreamscape with glittering waterfalls, mountain-size sneakers, and a grandiose temple presided over by women who could be Grace Jones’ cyborg descendants. It’s an incredibly rich landscape, and the 10-minute experience barely gives you time to take it in. “A big comment has been that it’s too short,” Aguilar y Wedge said. “People want to spend more time in this place, to be able to explore.”

Hyphen-Labs plans to continue developing the project, in conjunction with scientific research on if, and how, VR can change how people see the world. Working together with scientists at Intel and several different universities, they hope to eventually use functional magnetic resonance imaging (fMRI) technology to examine how viewers respond to the project.

The team doesn’t like the much-vaunted term empathy, which they say prioritizes the viewer over a piece’s content and creators, and often seems to focus on “making you feel sad about us,” according to Tankal. They are more interested in visibility and engagement in a space where they have users’ undivided attention, aiming to reduce prejudice and fear by simulating interaction with black women.

“NeuroSpeculative AfroFeminism” presents a dazzling and optimistic vision of the future, one that centers on the creative and technological powers of women of color. At a time when many are feeling vulnerable and discouraged, the creators of Hyphen-Labs present an empowering call for women of color to imagine their own future worlds and make their voices heard.

Sue Ding is a documentary filmmaker and a researcher at MIT’s Open Documentary Lab.

This Article is related to: Film and tagged Sundance 2017, Virtual Reality