Plus, the filmmaker provides another look at the film, starring Amandla Stenberg and George MacKay. 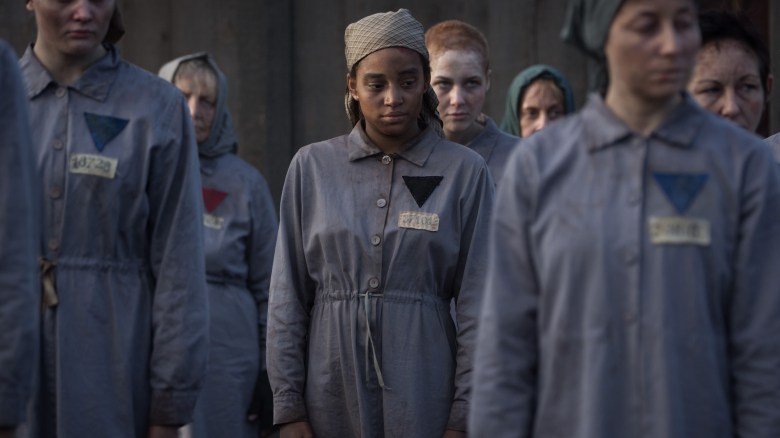 Late last week, Variety debuted a first look picture (see below) from “A United Kingdom” and “Belle” filmmaker Amma Asante’s latest feature, a World War II-set interracial romance titled “Where Hands Touch.” The film follows the romance between pair of German teenagers — Amandla Stenberg as the biracial Leyna and George MacKay as Lutz, the son of a prominent SS officer and a member of the Hitler Youth — and it unfolds against the backdrop of the war and the Holocaust.

The first look image was met with backlash across social media platforms, and various commenters loudly voiced their displeasure that, in crafting a story around a persecuted person and a Hitler Youth, Asante was “romanticizing” Nazis and otherwise diminishing the experience of those that suffered during World War II and the Holocaust.

I didn’t realize until @mixedtck told me a second ago that “When Hands Touch” is a Nazi romance. This is gross: https://t.co/3DPnCzbWMK

Coming from the romance novel world, where Nazi romantic heroes is suddenly A Huge Fucking Problem, Where Hands Touch greatly concerns me.

In debuting this first look at the feature, Asante also addressed the difficult nature of the film’s subject matter. She told Variety: “It has been a passion of mine to tell this story for many years — to shine a light on the existence of German children of color who were forced to grow up under Hitler’s rule, labelled as ‘Rhineland bastards.’ Against this historical backdrop, Leyna and Lutz enter a rite of passage negotiating the path to true identity in a society that has turned in on itself and is eating its own tail. Completing this film brings together everything I am as filmmaker.”

Asante was soon compelled to respond on her own Instagram account, where the filmmaker emphasized her desire to shine a light on the atrocities committed against children during the war — not just young biracial and black Germans, but also the German youth who were forced to join Nazi groups — and how she hopes that story will be reflected in her newest film.

In an updated statement to IndieWire, Asante again emphasized her intentions and hopes for the film, and she also provided another exclusive image from the film (see above):

“This week, a First Look image of the film I have made starring Amandla Stenberg was released, and it revealed all sorts of concerns, questions and worries with fears on what this film will be about. My passion has been to shine a light on the existence of the children of colour who were born and raised under Hitler. These children were also persecuted and my wish has been to explore how Black and Bi-racial identity was perceived and experienced under Nazi facist rule. The young girl’s experience in ‘Where Hands Touch,’ sits alongside the Jewish experience and the experience of others who were persecuted. It looks at how Germany became Nazi Germany and ‘slept walked’ itself into a disgusting and murderous state that resulted in it killing its own people and those of other countries.

Leyna’s story (Amandla Stenberg) is told in this sad and terrifying context. My reasons for making this film sit around my concerns of the current climate but also a continued and growing intolerance of racial and religious difference, that we all have sensed for many years and which is becoming even worse now. As a filmmaker, my wish is to center on bringing attention to this through my work.

Amandla and I teamed together to shine a light on the hatred that Nazi Germany visited on Europe and to make a film that might contribute to the dialogue of how we fight this horrific racial and religious ignorance today, along with the intolerances visited on the many other marginalized groups and intersections. With only a few lines and one image ever offered to a filmmaker to comment on when a First Look image is about to be released, and with the lead character in this film embarking on such a large rites of passage story, it is difficult to summarize all the things one might want to about a film in a brief article. Amandla’s role as a sixteen year old in this film brings attention to an, as yet, untold story in the arena of drama cinema, to the existence of the other ‘others’ who suffered during the holocaust. This does not mean that the Jewish experience is not also key to our story. It is.

When, as a 17 year old member of the Hitler Youth (compulsory since 1936), George MacKay’s character discovers exactly what his country is and what it stands for through learning the truth of what is happening to Jews and then to Leyna as she is thrown into a camp system, he rejects the doctrine and challenges his father’s belief system.

I hope that this at least clarifies concerns as you encounter the image of this German girl of color being raised in fascist Germany. I have all the respect in the world for those who have enjoyed my films thus far and i would never make a movie that glorified, glamorized or romanticized hatred and murder in any way. On the contrary, I want to explore the voices of the marginalized. By exploring the experiences of yesterday we can hopefully be better prepared when ugliness heads our way today. Sending you all, love and light.”

Two of Asante’s previous films, “Belle” and “A United Kingdom,” are historically-set dramas that focus on interracial relationships that unfold despite intense racism and persecution.

“Where Hands Touch” was shot last year in Belgium and the Isle of Man and is currently in post-production. Asante’s latest film, “A United Kingdom,” opened last week.