The "Big Little Lies" star discusses how secrets lead to violence, violence invades our culture, and the kids are the ones who suffer. 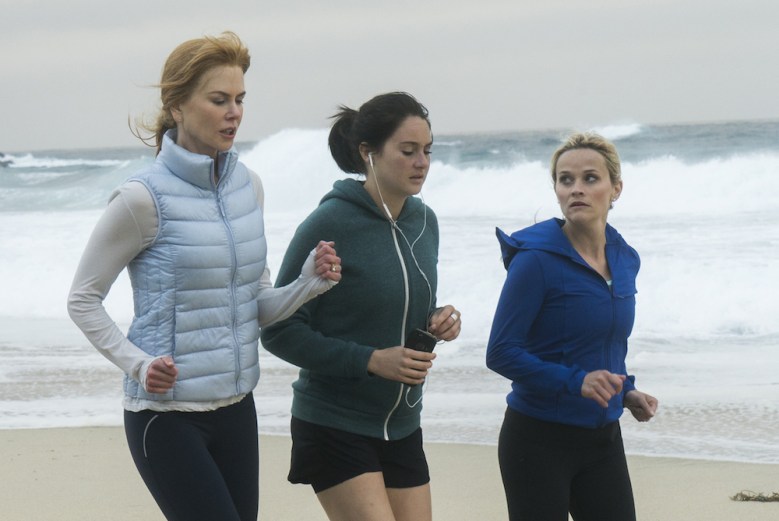 During the fifth episode of “Big Little Lies,” director Jean-Marc Valle unveiled an image so instantly satisfying its full weight didn’t register right away: Three women, running together in silence, wordlessly united against the pain all around them.

Jane’s therapeutic jogging scenes have become a staple of the HBO limited series, but Shailene Woodley’s character is no longer alone. Her new equally tormented best friends, Madeline (Reese Witherspoon) and Celeste (Nicole Kidman), are now running right beside her. It’s a testament to the support needed to survive in a world filled with hardship, but it’s also a conviction of silent suffering. Each woman has a secret. Each woman is afraid to confess her secret, and — as the series so prominently foreshadows — it could end up killing one of them.

READ MORE: Reese Witherspoon Made ‘Big Little Lies’ Because She Had Enough of Hollywood Reducing Women to ‘Wives and Girlfriends’

“Ziggy was a product of domestic violence. So I think in Jane’s mind there’s a silent fear of him being like his father no matter what she does — because she was out of control of her body when she was in the hands of his father. I think with her son there’s that trepidation of, ‘What can this child do to me that I’m not aware of? I have to be in control constantly.'” Woodley is quick to credit her fellow cast members for fighting back and breaking down barriers within the entertainment industry, stating that Hollywood is “still very patriarchal,” but less than it was when Witherspoon and Kidman were her age. She also contests the show’s themes “of infidelity and violence, kindness and jealousy, empathy and compassion” are widely applicable and “transcend gender.”

But the fear still felt by women, mothers, and parents in general can end up damaging their kids.

“I think all of this suppression America forces upon its citizens […] creates a really hard and harsh world — especially for young men,” Woodley said, pointing to “Don’t ask, don’t tell” as a subconsciously accepted example of the American mindset. “There’s not really a place in this world where a young man is able to be who he is because he’s demanded [either] to be a man and live in this crazy, patriarchal paradigm, or — if he’s in touch with his feminine side — he’s all of a sudden gay or queer or trans, even if he doesn’t identify with that.”

“There’s not a lot of empathy for what it must be like to be young boy in a world that [either] demands violence because that’s what makes you strong and brave, or, if you are not operating from that place, you’re weak. You’re given a certain label [no matter what], and I think that’s where a lot of violence stems from.” Aptly, Woodley even empathizes with one of the series’ most detestable characters: Perry, the abusive husband played by Alexander Skarsgaard.

“With Perry, you see this person who struggles with wanting to be a good father and wanting to be a good husband, but he deals with such inner rage, which clearly comes from insecurity and trauma that he hasn’t worked through,” Woodley said. “So how can he battle his demons if he’s not even aware that society expects him to be a certain way and that’s where he’s been operating from?”

If fear is the problem, then Woodley sees compassion as the solution.

“When Jane arrives, she’s living in this small one-bedroom apartment, and she’s sort of scraping to get by to give her child a good education,” Woodley said. “She immediately judges these women who seemingly have it all, and then she recognizes that just because it looks a certain way from the outside, it doesn’t mean that human being is actually OK.”

“I think that if we were to apply that to our society, on a mass level, we would see some dynamic social shifts,” Woodley said. “It’s about empathy, really, and I think Jane’s character allows for that empathy to coexist in a world of material possession.”

As powerful as it is to see these three women coming together — both as characters and real people — “Big Little Lies” represents the challenges of our past as well as the goals for our future. Fear may dominate the world, but empathy is how we topple the patriarchy.