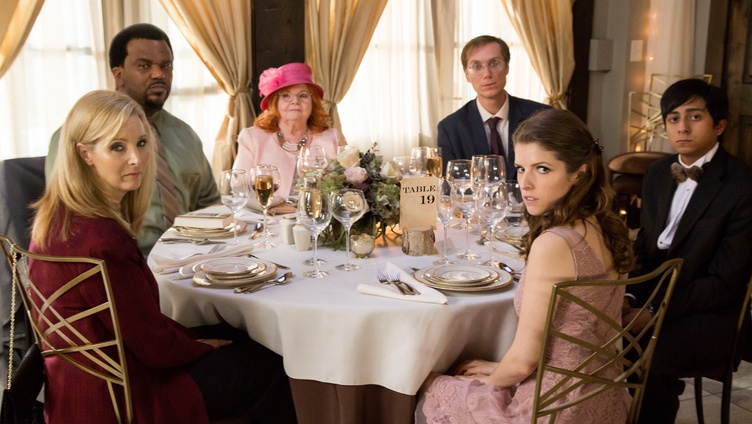 The week after the Oscars, most of the contenders are moving on to home viewing. It was a terrific season, but the market needs strong new entries to stem the box-office slide.

Neither of this week’s two most prominent releases — “Table 19” with a national Fox Searchlight break and “The Last Word” (Bleecker Street) — will bolster box office. It also doesn’t help that two highly-touted and well-reviewed wide release studio films, Fox’s  “Logan” and Universal’s “Get Out,” are competing for many of the same viewers.

A series of smaller niche audience releases remain. And four this weekend are either Israeli or aimed at audiences interested in Jewish topics. Led by “Women in the Balcony” (Menemsha) they could see further life over the next several weeks.

Fox Searchlight opted to take this poorly-reviewed wedding reception comedy starring Anna Kendrick and Lisa Kudrow away from a limited initial release. The nationwide play yielded modest results but with enough of a Saturday increase to suggest adult audiences are sampling the new kid on the block. Unlike nearly all Fox Searchlight releases, this one had no film festival exposure and was released with less fanfare than the usual platform release. The gross is about 50 per cent above what their “Demolition” managed last spring in a similar release pattern, but below what “Absolutely Fabulous” did at fewer than half the screens.

What comes next: The second weekend hold will tell the story for its future. Just about a year ago a veteran actress propelled an old-fashioned comedy to considerable success. “Hello, My Name Is Doris” starring Sally Field became a $14 million success. A year before, Blythe Danner and “I’ll See You in My Dreams” was an early success for Bleecker Street. Both those films received favorable reviews, however, as did Lily Tomlin’s “Grandma.” Shirley Maclaine, with Amanda Seyfried in tow, stars as an aging woman who decides, in a last bit of micromanaging, to create her own obituary. The distributor got the top limited New York/Los Angeles theater combo of the weekend, but to mixed results due to poor reviews. However, this could have more appeal as it hits a broader older audience ahead.

What comes next: This quickly expands to other big cities this Friday. This micro-budget Rhode Island film is about a 30-something man who retraces his roots on a return home from his Wall Street life to bury his grandmother. It opened in two prime New York/Los Angeles theaters to modest results.

What comes next: The Bay Area and Philadelphia open this Friday.

This documentary on the sensitive topic of humor and the Holocaust opened at Manhattan’s prime Lincoln Plaza Theater. In a possibly unprecedented situation for this location, no New York Times review appeared even though it has received considerable festival attention leading up to the date. Despite this, the film achieved a respectable gross.

What comes next: Phoenix and Toronto open this Friday, with other big markets following after.

This story of Orthodox women confronting male power after a Bar Mitsvah accident opened initially in to Los Angeles theaters after scoring a major hit in its native Israel. This initial result, with a strong boost on Saturday night post-Sabbath, should elevate this to wider attention.

What comes next: Six south Florida theaters begin its nationwide rollout this Friday.

The Freedom to Marry (Argot) – Festivals include: Hot Docs, Frameline 2016

Also opening in Manhattan without any New York Times attention, this documentary about the struggle for same sex marriage equality opened to a reasonable response, bolstered by filmmaker appearances.

Set in an Israeli working class city where two nationalities struggle side by side, the lead character is a Palestinian rapper. This opened in New York and Los Angeles to modest results.

What comes next: As with most Israeli-themed movies, expect further attention ahead for this in niche situations.

This documentary covering the history of Israeli expansion into Palestinian lands since 1967 opened at New York’s Film Forum to a decent result.

What comes next: As with most Israeli-set films, including docs, this should get further attention nationally.

Actor-director Josh Kornbluth (“Haiku Tunnel”) turned his real life nightmare of tax avoidance and other financial nightmares into a hybrid one-man/narrative film. Its initial New York date at the Landmark Sunshine got a minor response.

What comes next: Two Los Angeles area theaters open this Friday to start its wider release.

A home grown Utah production set in the 1980s, this celebrates high school life as a class president finds himself entangled in school politics. It opened in its home territory to what is actually a decent result amid much more publicized studio releases.

What comes next: Likely to play best close to where it was made, though these results could get it further attention.

Also available on Video on Demand “My Life as a Zucchini”

My Life As a Zucchini (GKids)

A minor result for the second week expansion for this acclaimed Swiss animated awards contender.

This Canadian historical epic set in the Ukraine during the Soviet era lost a number of its limited theaters the second week, with remaining ones showing minor totals as it looks to complete its short run quickly. More than doubling its theater count, Amma Asante’s African colonial romance takes over as top recent release even as it continues to fall short of the results of her earlier “Belle.”

Even without winning the Documentary Feature Oscar, the public interest continues at a level rarely seen for an art house audience non-fiction theatrical release.

With some home viewing available, the small reaction to Amazon’s two major Oscars isn’t a big surprise. This still has grossed more than the Best Picture winners the two previous years and almost double “Moonlight.”

Its Best Foreign Language Film Oscar win boosted the grosses (by over $100,000) and the PTA (by over 50 per cent) for this Iranian film. The gross has now surpassed that of last year’s winner “Son of Saul,” also released to parallel the awards season.

Cat lovers nationwide continue to respond to this Turkish documentary which has caught a wave that should lead to a lengthy run.

Germany’s Oscar finalist continues on a reduced number of screens as it looks to sustain a post-awards life.

Though it has never achieved its deserved attention, Jim Jarmusch’s latest has managed to stick around longer than some of the awards contenders released in December.

With a shorter release period than earlier, this year’s short film compendium looks to about equal last year’s record totals.

This Article is related to: Film and tagged Arthouse Audit, Box Office, The Last Word