LeFou will express his feelings for Gaston in the live action remake, director Bill Condon confirmed. 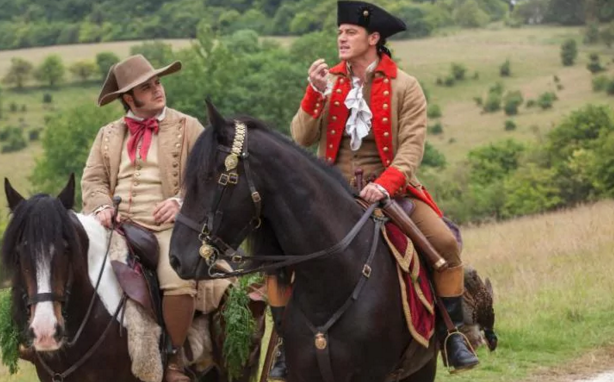 Josh Gad and Luke Evans as LeFou and Gaston

Fill in the blank: “No one’s ___ is incredibly thick like Gaston’s.”

The word you’re looking for is “neck.” The line occurs in a song called “Gaston,” the second big number in Disney’s “Beauty And The Beast,” the beloved animated musical from 1991, with music by Alan Menken. The highly anticipated live action remake will star Emma Watson (of “Harry Potter” fame) as book-toting princess Belle, and Dan Stevens (“Downton Abbey”) as The Beast.

The song belongs to a character named LeFou, played here by Josh Gad (“Frozen”), who acts as macho man Gaston’s sidekick and hype man. LeFou continues: “You can ask any Tom, Dick or Stanley/ And they’ll tell you whose team they prefer to be on.” As LeFou continues to sing Gaston’s praises, he fawns over his beefy biceps and hairy body.

Disney is no stranger to sexual innuendo: We’ve all seen the original cover art for “The Little Mermaid,” and rewound the wedding scene countless times, eyes squinting at the priest. That movie’s buxom villain, Ursula the sea witch, is a short-haired, deep-voiced, independent lady with eight  tentacles who is followed around by two slithery eels. Villains such as Scar in “The Lion King,” Jafar in “Aladdin,” and Prince John in “Robin Hood” have all bordered on the fey in voice and gestures. (They also tend to have darker skin and features than the other characters).

LeFou is short, rotund, cloying, and sniveling. Not exactly the image with which gay men like to be associated. The original character of LeFou

There is a pattern with all of these coded “gay” characters, all of whom could be described in contemporary terms as gender non-conforming: They’re all villains. Drag queens may love a good villain to camp up, but the message Disney has sent children over the past century is that nice girls are princesses, and they will be saved from ruin and carried off into the sunset by nice princes, who are boys. Buck the prescribed gender roles and you will end up dead, impaled by Prince Eric’s schooner.

Bill Condon, director of the live-action remake, has a chance to reverse this harmful subliminal messaging. In an interview with Britain’s Attitude Magazine, Condon revealed that he will make his mark on the Disney legacy by allowing years of subtext to finally come to the surface, presenting the first “nice, exclusively gay moment in a Disney movie,” the director said.

Condon continued: “LeFou is somebody who on one day wants to be Gaston and on another day wants to kiss Gaston. He’s confused about what he wants. It’s somebody who’s just realizing that he has these feelings. And Josh [Gad] makes something really subtle and delicious out of it. And that’s what has its pay-off at the end, which I don’t want to give away.” Condon, who counts Sir Ian McKellen as a good friend, is openly gay. He wrote the screenplay for Rob Marshall’s film adaptation of the musical “Chicago,” as well as wrote and directed “Dreamgirls,” “Kinsey,” and “Gods And Monsters.” With such an illustrious career, perhaps Disney saw this historic admission coming when they hired him.

The film also stars Luke Evans as Gaston and Kevin Kline as Belle’s father. In the lesser seen roles, McKellen appears as Cogsworth (a clock), Ewan McGregor as Lumiere (a candlestick), Emma Thompson as Mrs. Potts (a teapot), Stanley Tucci as Cadenza (a piano), Gugu Mbatha-Raw as Plumette (a feather duster), and Broadway legend Audra McDonald as a wardrobe.

READ MORE: ‘Beauty and the Beast’ Trailer: Emma Watson and Dan Stevens Fall in Love In This Live-Action Tale as Old as Time — Watch

LGBTQ fans of the film will proceed with caution, and shouldn’t go in expecting the world. LeFou and Gaston are still villains, so nothing will change about that unfortunate conflation. Even if the moment wreaks of tokenism, it is still a historic milestone for Disney to recognize a gay character out loud.

In Condon’s capable hands, and with a script co-written by Steven Chbosky (“The Perks of Being a Wallflower”), it is possible that LeFou’s moment of self-reckoning will — like his swash-buckling, not-so-subtle love song — hit all the right notes.

“Beauty and the Beast” opens in theaters on Friday, March 3rd.

This Article is related to: Film and tagged Beauty and the Beast, Disney, Josh Gad, LGBTQ