He was truly ahead of his time. 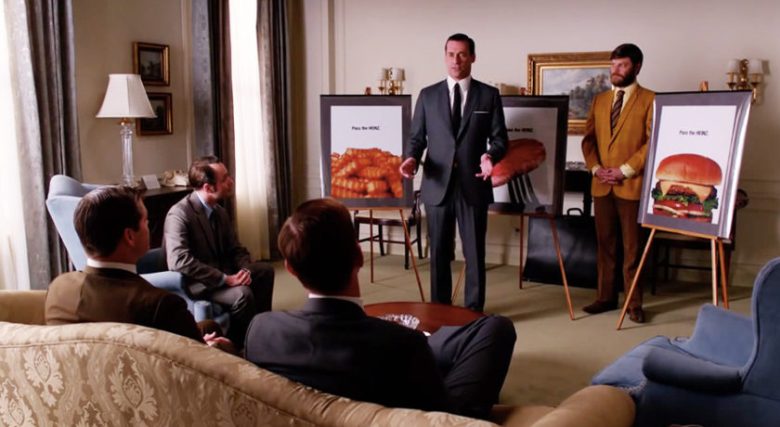 Life imitates art, and so it is that Heinz is now running an ad campaign created by Don Draper on “Mad Men.” Suggesting that the idea was truly ahead of its time, Heinz actually passed on the idea in the show; now, however, they’ve apparently seen the light. Ketchup itself is conspicuously absent from the ads, which featuring close-ups of fries, steak and a cheeseburger under the words “Pass the Heinz.”

“Even though Don Draper created the ‘Pass the Heinz’ campaign almost 50 years ago, the communications still really work in today’s world,” said Heinz’s Nicole Kulwicki. “Mr. Draper really understood the one thing every Heinz fan knows, which is to never settle for the foods you love without the great taste of Heinz. What we loved about the campaign is that it doesn’t require paragraphs of copy to explain it. It features mouthwatering food images, and all that’s missing is the Heinz.”

The images were recreated by ad agency David Miami, which was tasked with replicating the photos first seen on season-six episode “To Have and to Hold” as closely as possible. “[Don and I] had a couple of Old Fashioneds,” joked Anselmo Ramos, chief creative officer of David, “and he gave me the mechanics from the original campaign.”

“As you can imagine, the creatives here are really happy to see their names next to Don Draper and Matt Weiner,” Ramos added. “They’re like, ‘Oh my God, we’re collaborating with them?’ “It’s interesting. Sometimes you’ll have two agencies collaborating for a client. This time, it’s a fictional agency and a real agency, trying to sell a campaign that just makes sense for this brand.”

All three ads will be seen on billboards in New York City and will also be seen in the New York Post; the one featuring fries will make its way into the pages of Variety.

This Article is related to: Television and tagged Mad Men