The former "Americans" star dishes on what it's like to be the only fictional character in the battle between Bette Davis and Joan Crawford. 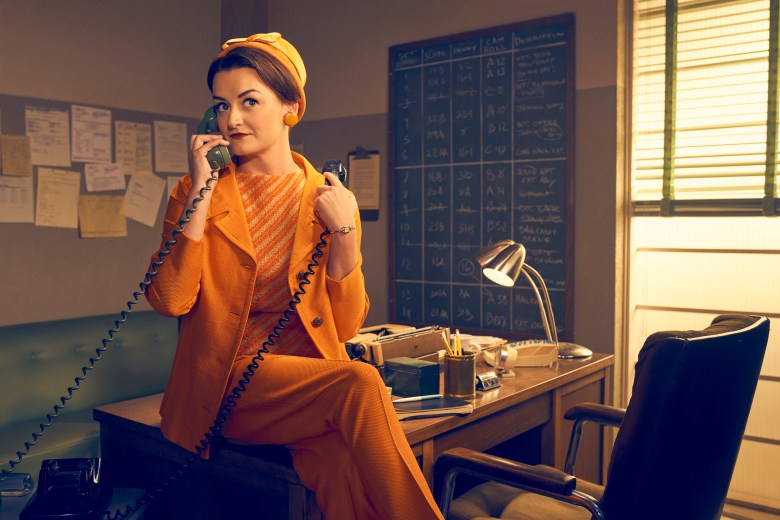 If your favorite “Feud: Bette and Joan” character is Pauline, Alison Wright gets it.

“I kind of love her too,” she told IndieWire. “She’s a strong, assertive, capable, able woman, and not a victim in any sort of sense. She’s got her head screwed on pretty tight. Ryan [Murphy] initially described her as being whip-smart and cool as a cucumber, so that’s an attractive concept right there.”

READ MORE: ‘Feud: Bette and Joan’ Main Titles: How That Striking Vintage Opening Sequence Got Made

Wright first became familiar to FX audiences as another 20th century secretary, “poor Martha” of “The Americans.” But the two characters couldn’t be further apart. As the loyal and clever assistant to director Robert Aldrich (played in the show by Alfred Molina), Pauline represents a rare breed of Hollywood women for the year 1962 — an aspiring director, who in this week’s episode has the cajones to push for the opportunity to helm her own film.

“Certainly in that era, I don’t think there were any women making anything,” Wright said via phone from New York, where she was just about to make her Broadway debut in Lynn Nottage’s play “Sweat.”

“So it was kind of interesting to think where would Pauline get this from, where would she get this moxie to think that she would be able to or even be allowed to? The fact that she had a perspective of her own life that was more than just kids and marriage in 1962 is a huge achievement right there. This character still had drive and ambition that wasn’t so commonplace for young women to have at the time.”

Ironically, a show about how women have struggled over the last century to get behind the camera features an impressive amount of women behind the scenes, including Gwyneth Horder-Payton, Liza Johnson, and Helen Hunt, three women directors directing four of the episodes. (Horder-Payton took on Episodes 3 and 8.)

“Getting to shoot all these scenes with all of these women and getting to be around all of these women all the time, these female writers, directors, it was a blessing,” Wright said, noting that it was a “very different” experience from her time on “The Americans,” where over the course of several seasons, only six of the episodes in which she appeared were directed by women.

Of the entire cast, Wright is the only series regular who gets to play a fictional character, which she saw as a major advantage.  “When you’re playing a real person, you’re restricted within the confines of the information you can find about them or the way they allowed their public persona to appear, versus who they might’ve actually have been. There’s a lot of complicated things there.”

That said, Pauline is a composite of several women from that time period, most especially a secretary named Geraldine Hersey, who was the one to discover the original novel “What Ever Happened to Baby Jane” and pushed Aldrich to direct it. (In real life, Wright said, Hersey was once described by Aldrich as “a better judge of what will make a good movie than are several major ‘experts’ on the subject.”) Creating the character, according to Wright, included references to a number of other women from film history. “There’s definitely a little bit of Carol Burnett, because I will put a little bit of Carol Burnett anywhere I can,” she said. “Eve Arden was somebody that Ryan intimated — he wanted a little bit of her sassy, wise-cracking sensibility. And in my mind I’ve got Rosalind Russell doing ‘Auntie Mame,’ I’ve got the original ’39 version of ‘The Women.’ I wanted Pauline to feel like she heralded from sort of the older time in Hollywood than the burgeoning, changing times of the ’60s. It’s just tipping my hat to my favorite era, really, of Hollywood, the ’40s and ’50s.”

That said, Wright definitely feels like the show has a modern sensibility — especially when it comes to the sort of sexist language Pauline has to overhear while working in the industry. “Fred [Molina] and I, didn’t really have to necessarily be on the same page because Bob and Pauline’s experiences and perspectives would have been so different,” she said. “She was definitely in a second-class situation to him, if you will, just because of the different sexes and the stuff that she would have to hear and pretend she wasn’t really hearing or not react to. The overt conversations [Bob] would have with Jack Warner right in front of her. Just this sexist, misogynist stuff that we as women have to listen to quite often.”

It might have been hard for her to internalize those conversations on set, except that in the year 2017, she still hears sexist remarks all the time, “so no, it didn’t feel any different,” she said. “There’s stuff that we don’t even really notice, as women. ‘Throw like a girl’ or something like that expression — we’re surrounded by all of this sexism that you don’t always recognize for what it really is. I think all women have grown up with that sort of thing. The way that we’re objectified by men, I don’t think that’s changed. It’s something that I’m always aware of in my life every day.”

READ MORE: ‘Feud: Bette and Joan’ Review: Why Care About the Facts When a Show Feels This True?

Pauline’s attempts to get a directing job have been unsuccessful so far this season, but she has one advantage working toward her potential future success: being fictional. According to Wright, “she’s a survivor and she isn’t beaten down. She doesn’t lose, she doesn’t give up, she doesn’t quit. She’s one of those women who will power through and find a way to do what she wants, not just fade into the background and try to find a husband and kids and be unsatisfied or resentful. She’s very determined to make a success of her life.”

So while you can’t look up on Wikipedia what ultimately happened to Pauline, by the time this season of “Feud” ends, we will find out how her story ends — because she promises that the writers have given her character some closure. “I was very happy with the ending of the story that they chose for her,” Wright said. “There was a couple of different possibilities milling around, of course, and I’m proud of the resolution.”

That’s right: For once, a story about women in Hollywood might have a happy ending.