The story of Prince Charles and Princess Diana features many key supporting players beyond the royal disaster of a couple, and we think Naomi Watts, Ben Mendelsohn and more should be expecting a call from Ryan Murphy. 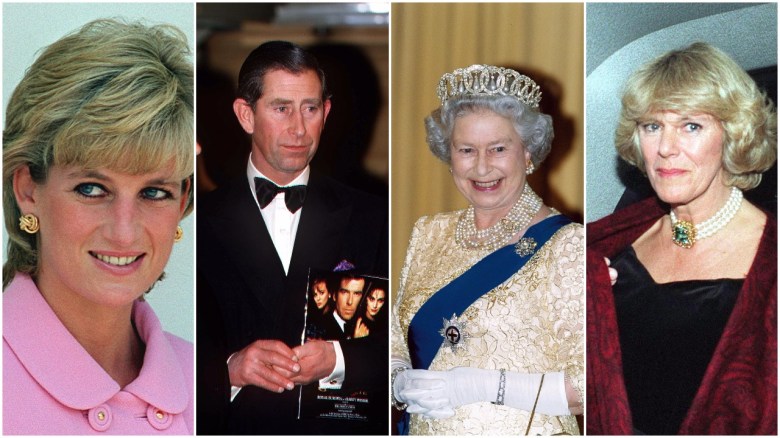 As played by Emily Blunt? We already know that Emily Blunt can totally kill the Princess Di look, thanks to a Halloween costume she wore in “The Five-Year Engagement.” But Blunt is also an incredibly nuanced actress who deserves a meaty lead role like this — and if the film world isn’t going to give it to her, then we happily welcome her to the world of television.

READ MORE: ‘Feud: Bette and Joan’ Review: Why Care About the Facts When a Show Feels This True?

As played by Ben Mendelsohn? Just look at that side-by-side above. Just look at it. Originally from Australia, the Emmy winner is simply perfect. We did briefly consider Tom Hiddleston, but then we looked at Ben Mendelsohn again. Yeah.

As played by Jessica Lange? The grand dame of Murphy-dom may as well have a literal crown at this point. With her regal bearing and ability to wear any hat no matter how elaborate, Lange won’t have to age up too much to play Queen Elizabeth II. We can just see her now, keeping Prince Charles in line and casting aspersions on her daughter-in-law.

As played by Hugh Grant? “Love Actually” fans would approve of Grant playing yet another prime minister, but it’s not likely he’d get to show off his dance moves in this one. Nevertheless, he’d fill out the suit and oversized glasses nicely, and he’s even about the right height — which reportedly was too tall to qualify to be a bus conductor. So Major settled for a career in politics instead. Quite.

As played by Naomi Watts? For the record, this is of course Sarah Paulson’s role if she wants it. But should Ryan Murphy not turn to one of his favorite leading ladies, Naomi Watts would be a high-octane addition to his stable of performers, and an intriguing challenge for the Oscar nominee. (And it’d be an interesting opportunity for Watts to take on a new angle on the story, after playing Diana in the 2013 biopic.)

As played by Ahmed Ahmed? In casting the lover who died with Princess Diana during that fateful Parisian car ride, we aimed to think of an actor whose heritage matched Fayed’s Egyptian background — and came across actor and comedian Ahmed Ahmed, who not only is very funny but has some decent credits, including a guest star role on “Maron” and a series regular role on the TBS sitcom “Sullivan and Son.” Ryan Murphy’s had good luck with mixing lesser-known actors with his casts — Sterling K. Brown, anybody? — so perhaps this could be a breakout role for him.

As played by Oona Chaplin? Camilla might be the more famous of the Prince of Wales’ post-Diana partners, but the third woman connected to Prince Charles during these years also bears some casting — and not just because Tiggy Legge-Bourke is maybe one of history’s all-time greatest names. In selecting the actress to play the Royal Family’s nanny, we couldn’t help but think about Oona Chaplin — after roles on “Game of Thrones” and “Taboo,” she has plenty of experience dealing with screwed-up family dynamics.

As played by Gillian Anderson? The legendary media icon wrote one of the best-known books about Diana’s life and death, and it’s not hard to imagine an approach to this story with Brown as a narrator. And while we tend to think Gillian Anderson can play any role, seeing her depict the tough magazine editor who covered Diana from the very beginning would be a treat.

As played by Charles Dance? There are plenty of great statemen of British drama who could take on this role, but we’d enjoy seeing Charles Dance, whose rich resume includes “Game of Thrones,” “Alien 3,” and “The Golden Child,” as the loyal consort of Queen Elizabeth II. Dance even brought dignity to the role of Karellen in “Childhood’s End,” and if you can seem regal while dressed up like a seven-foot-tall bright red demon, you can do anything.

As played by Aasif Mandvi? Granted, the actor and comedian is almost the same age as journalist Martin Bashir is now, but have you seen both of them? They really haven’t aged. Bashir looks a lot like he did 20 years ago when he was interviewing Princess Di. We also like that Mandvi grew up in England and has experience asking the tough questions on “The Daily Show.”

As played by Jonathan Pryce? Fresh off of playing the High Sparrow on “Game of Thrones,” Pryce would lose the robes and don a suit  to play lawyer Peter Carter-Ruck, Not only does the actor have the proper air of command about him, but we can also see him representing the royal nanny Tiggy with dignity (and not even crack a smile saying her name).

As played by John Ortiz? Assuming that this series goes beyond the breakup, chauffeur Henri Paul seems like a candidate to be a Mark Fuhrman-level figure in this season’s saga. Ortiz, the underrated MVP of “Silver Linings Playbook,” is no stranger to TV (RIP “Togetherness”). Depending on what version of the story this will draw from, Ortiz would be the ideal kind of character actor to ground Paul in something more than a simple scapegoat or cartoon villain.