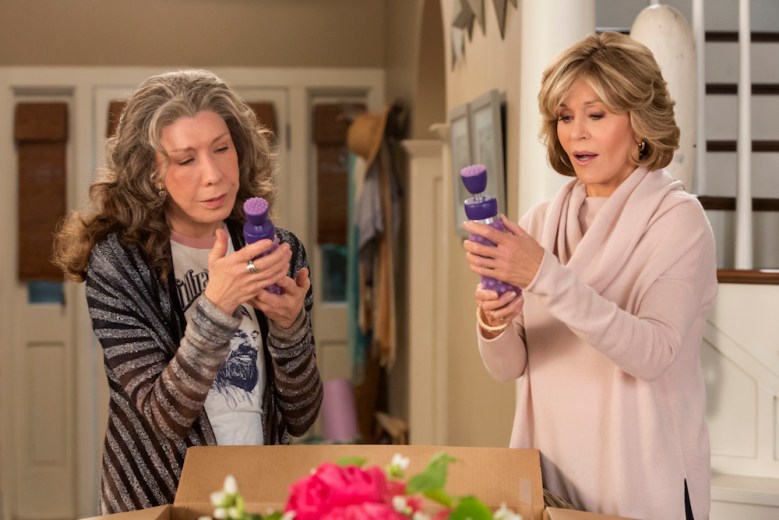 By now, you know if “Grace and Frankie” is for you.

After two seasons of curiously addictive TV, it’s clear the talents of Lily Tomlin and Jane Fonda are as undeniable as the show’s comedic and dramatic rhythms are challenging. You may love the cast, but find the storytelling uneven. You may want more comedy, more drama, or just more episodes — like the stars. But “Grace and Frankie” is exactly what it wants to be, whether you love it or remain oddly drawn to it, and Season 3 is all about being proud of that identity.

And to this critic, it should be.

The main thrust of Season 3’s first six episodes is unabashed openness: Grace and Frankie have started their own business, manufacturing vibrators for the elderly, and they’re not going to let social hang-ups about sex or ageist business practices get in their way. Grace’s old friends may squirm in their expensive sofa cushions when asked about wrist pain while masturbating, and a banker may not give them a loan because (without saying as much) he doesn’t think they’ll live long enough to pay it back, but Grace and Frankie see right through them to the truth: This is what they want to do, they know there’s a need for it, and damn it, either get on board or get the fuck out of their way.

READ MORE: ‘Big Little Lies’: Shailene Woodley on American Repression, Violence, and Why ‘Every Parent is Afraid of Their Kid’ Such audacious conviction is compelling in and of itself, but these are also topics germane to what the actors and showrunner (Marta Kauffman) care about in real life. Fonda and Tomlin aren’t ready to sit down and shut up simply because Hollywood doesn’t care about women their age. They want to talk about marching against the man, roles for women over 50, and not slowing down in old age.

In other words, Fonda and Tomlin are fighting back — every day, in every speech and every interview — so it makes sense that their characters are doing the same. They both want to talk about whatever they’re living through right now, and few shows take on this mantle so directly, offering its creative producers an outlet to say exactly what they want to say, exactly how they want to say it.

“Grace and Frankie” remains a rollercoaster of emotions, with insane comedic highs — like the aforementioned dildo dance to kick off the season — and sobering dramatic lows. But in Season 3, Kauffman and co-creator Howard J. Morris are really leaning into the talents available to them. Tomlin is on fire right from the start, full of more energy than her typical charged self and handing out zingers left and right. Fonda is an excellent foil, but she also gets one major moment to show off her dramatic pull during Episode 5. Each dabbles in both genres, as usual, but the writing allows each actress to shine under their best light. And here is where Netflix gets involved. The streaming network famous for allowing unimpeded creative freedom deserves props for leaving this show well enough alone. So much talk surrounding the first two seasons focused on whether it was a comedy or a drama, but now that debate has blown over. We know what “Grace and Frankie” is, and we are either begging for more or can’t help ourselves from watching a few extra episodes. Moreover, the principal voices shine through unfiltered, providing us a peek inside the mindset of women we admire (without, of course, turning into a meta lark and distracting from Grace and Frankie’s emotional journeys).

From the moment Frankie sways to the music surrounded by a gang of geriatric vibrators, Season 3 is as joyously unique as it is self-assured. Fans will be elated and anyone else drawn back to the beach story should be pleasantly surprised. Season 3 knows the story it wants to tell and how it wants to tell it. Give in and enjoy.

“Grace and Frankie” Season 3 is streaming now on Netflix.