Alison Brie also guest stars in the "Dr. Ken" season finale, as Jeong's character tries out for a Dan Harmon comedy about a community college. Brace yourself for deja vu. 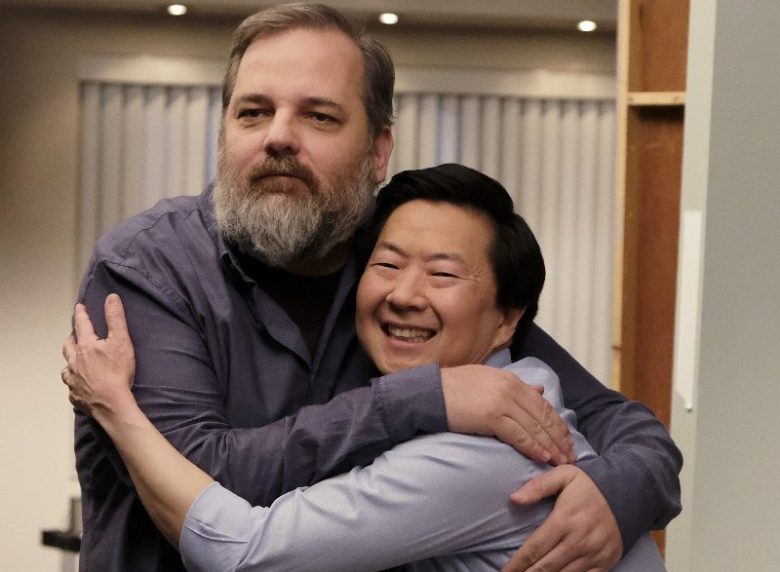 Ken Park, a doctor pursuing a career in comedy, has been offered a great opportunity: A starring role in Dan Harmon’s new comedy about a group of misfits at a community college.

Park is a bit of a goofball, so ultimately Harmon writes the part of Señor Chang, an eccentric Spanish teacher, for the comedian. Sound familiar? “The word ‘surreal’ was pervasive,” Jeong said of having Harmon on set. “It was just wonderful to see Dan as a performer. People forget that he started out in improv comedy, at Comedysportz in Wisconsin. Everybody was raving behind the scenes a how great a performer Dan is. That was gratifying. And it was cool to see him have fun in the multicamera format.”

Jeong said Harmon had plenty of questions for the episode’s director, Phill Lewis, and showrunner Mike Sikowitz about the multi-camera process. “Dan said, ‘just keep me in there as long as you want,'” Jeong said. “He was there to experience the genre in its entirety.”

He said bringing Harmon on “Dr. Ken” felt like coming “full circle. It really meant a lot to me.”

And according to Jeong, the inspiration for doing so came directly from another “Community” player. “It was Gillian Jacobs, when she guest starred on an episode, who said, ‘you need to bring Dan on the show.’ Gillian demands public credit for it, and she deserves it.” Harmon emailed that he was “grateful” to Jeong for the experience. “And having seen how a multi-cam set works, I finally understand what Sony was so frustrated about,” he quipped.

Indeed, it may be Jeong who helped finally heal any lingering wounds between Harmon and Sony over “Community.”

“It was really cool to see, Dan Harmon on the Sony lot, just talking to Sony executives and having a laugh,” Jeong said. “There was no tension or drama whatsoever. On any side. Everyone was just having fun. That was really cool. There’s something to be said about that.”

Jeong, of course, reiterated his desire for the long-gestating “Community” movie to actually happen. “I’d be lying if I said I didn’t want to make that movie,” he said. “We all want to make six seasons and a movie come true.”

As for the episode itself, Jeong’s fictional Ken takes a leap in auditioning for “Community.” But Jeong said that’s where the similarities to real life end.

“When I was a doctor, I had plenty of experience doing standup comedy,” he said. “I’d already been on Comedy Central and had done comedy professionally and acted professionally. By the time I left my job, everyone said they saw it coming. And in two years, ‘The Hangover’ happened. And then ‘Community’ happened. In this universe, Ken Park has only done a handful of open mics and a docuseries.”

Jeong said the episode actually mirrors a different experience he had, earlier in his career, when he was approached to appear on NBC’s “Last Comic Standing.”

“It was a watershed moment for me because I really wanted to do it,” he said of the opportunity. “But I didn’t feel like I was ready at that time. I only had maybe 15 minutes of material.” On the flip side, Jeong admits that his character is a “better doctor” than he was in real life. “He’s a genius, figuring out what was wrong for Jonathan Bank’s character [in one episode]. As Ken Jeong I would have to refer that patient to a specialist. I’m a general practitioner.”

“Dr. Ken” ends Season 2 on a bit of a cliffhanger, just as the show now waits for word on renewal. At this point, Jeong has already managed to bring on every “Community” co-stars for guest spots – with the exception of two.

“We’ve had everyone now except Donald [Glover] and Chevy [Chase], and don’t think I’m not working on it,” he said.