Lowe directed this scrappy, spare, undeniably artful thriller during an 11-day stretch in the third trimester of her own pregnancy. 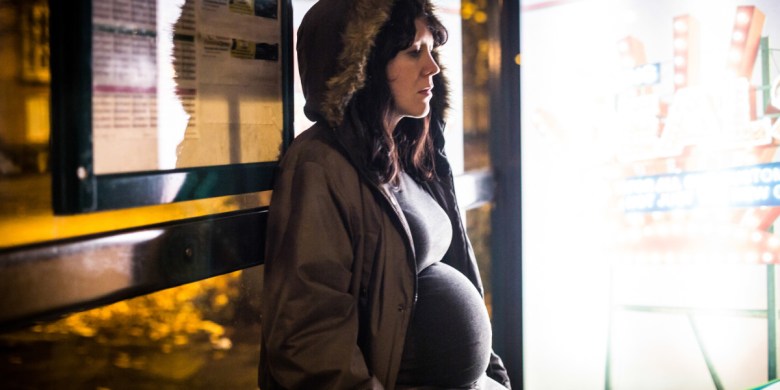 If “The Boss Baby” offered the family-friendly suggestion that having a child is akin to a corporate merger, Alice Lowe’s gleefully demented “Prevenge” makes the far less pacifying argument that carrying one is more like a hostile takeover. Or, at least for one unfortunate Cardiff woman, a demonic possession.

Ruth (Lowe) is eight months pregnant, newly widowed, and beginning to hear a bloodthirsty voice from inside her own body — from her womb, to be exact. Speaking in a high-pitched coo that sounds like Shirley Henderson with a homicidal twist, the unseen fetus (Lowe, effectively talking to herself) paints a nihilistic picture of the world, coercing her prospective mother to see other people through a black veil of her own grief. “People may be sweet,” Ruth’s bump whispers up at her, “but I’m bitter.”

Is she ever. A psychotic brew of specific hurt and standard hormones, the fetus imagines that people are cruel by nature, and only keen on serving their own selfish needs. “Look at this lot, out on the rape” mewls the Bundy in the oven as Ruth walks her past an innocuous group of young men. “But it’s okay, I’m here.” Of course, she isn’t quite as soothing when telling Ruth to kill. “You have to hand yourself over like a human sacrifice to their will,” an ultrasound technician commiserates with our distressed heroine, but she has no idea just how many human sacrifices this pregnancy might ultimately require.

American audiences might recognize Lowe from “Sightseers,” the jet-black Ben Wheatley comedy that she starred in and co-wrote. This is another cracked smile of a movie, coursing with the same perversely unhinged British charm. What’s more, “Prevenge” comes from a place of palpably personal experience: Desperate for an outlet to express the tender invasiveness of gestation, Lowe directed this scrappy, spare, undeniably artful film during an 11-day stretch in the third trimester of her own pregnancy.

At its best, “Prevenge” feels like a hilarious distillation of every conflicted, politically incorrect thought that many pregnant women are too polite to share in public. The experiential nuances might be lost on half of the population, but Lowe’s forthright comic wit — as well as her savagely clever use of familiar horror tropes — allows for the bluntness required to connect with even the least empathetic of male viewers. Lowe might eschew the sort of broadly obvious beats that a less idiosyncratic filmmaker might use to convey Ruth’s annoyance (e.g. there isn’t a scene where she glares at some wanker who won’t give up his seat on the bus), but it doesn’t get much more direct than an imminent mother interrupting some idle chitchat about the miracle of life by holding her swollen belly and saying: “Nature’s a bit of a cunt, though.”

READ MORE: How A Pregnant Actress Overcame Her Frustrations With The Film Industry And Made Her First Feature

Besides, “Prevenge” is less interested in shitting on men than it is in speaking to women. The MRA crowd might be alarmed to discover that Ruth’s first victims are all greasy sleazebag types who see her as a lumpen piece of meat, but if anyone from that sad demographic has the balls to sit through the pulpy castration scene in the first act, they’ll be rewarded with the revelation that Ruth is an equal-opportunity serial killer — a fact made clear during a finely serrated scene in which a female HR type played by the great Kate Dickey denies her a job on account of her pre-existing condition. Over time, it becomes clear that there is a very specific method to Ruth’s madness, her targets chosen for reasons that are only spelled out as the film bleeds out during its comparatively lifeless second half.

As interesting as it is to watch Ruth question her violent cravings, the film’s moral fixation is at odds with its heroine’s more generic frustrations. The tragic backstory only detracts from the purity of Lowe’s central metaphor, and there’s never much of a meaningful dialogue between the forces of grief and gestation. Slack even at a snippy 82 minutes, and ultimately held together by Toydrum’s mordant synth score more than anything else, “Prevenge” could probably have used a bit more time in utero. Then again, such raggedy storytelling is a small price to pay for a movie that feels birthed before your very eyes, wailing and covered in that fleshy pink gunk and as messy as life itself.

“Prevenge” opens in theaters opens theatrically at the IFC Center in New York and The Cinefamily in Los Angeles, and will be available to stream nationwide on Shudder, on March 24th.

This Article is related to: Film and tagged Alice Lowe, Reviews