The director offers insight to the "alternate cut" rumors, but it may end up adding to the mystery of the film's production. 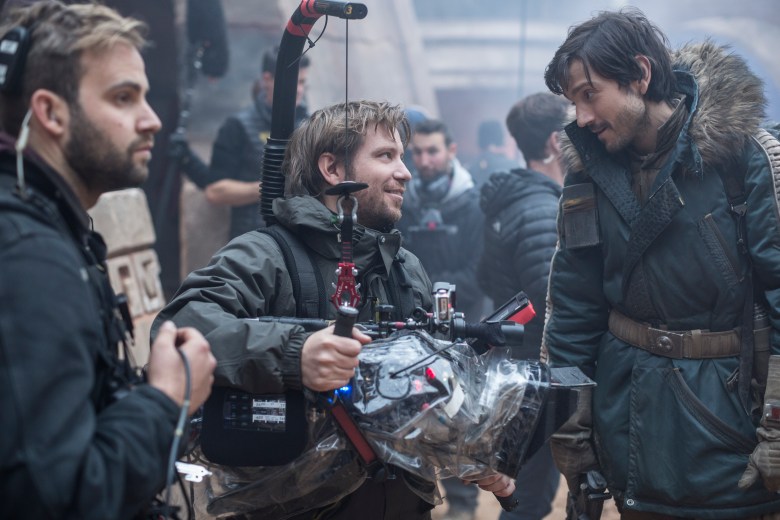 It has been well-documented that the recent “Star Wars” spinoff film “Rogue One” underwent some drastic reshoots before its release, and this has fans salivating over the thought of an alternate cut. And while many images featured in the film’s trailers were anticipated to be included as deleted scenes on the Blu-ray, director Gareth Edwards (“Godzilla“) recently revealed in an interview with Fandango that this will not be the case.

“They’re not scenes you can just put on a DVD,” Edwards explained. “They’re moments within scenes and threads, and you pull a thread and it changes.”

This is intriguing commentary, but it also contradicts the interview Ben Mendelsohn did with Collider explaining that there are “enormous differences” within “20 or 30 of the scenes.” There was a shot from a sizzle reel from Star Wars Celebration last year that showed the film’s heroes Jyn Erso (Felicity Jones) and Cassian Andor (Diego Luna) running across the tropical battlefield, with what appears to be the Death Star plans. There is also a shot from the film’s first trailer depicting Director Krennic (Ben Mendelsohn) walking through the beach surrounded by fallen soldiers, suggesting that Krennic was either right on the rebels’ trail or engaged in some kind of combat.

The director reasonably explains the logistics of having shots readily available for the movie’s trailers, but how these same shots may never make it into the final cut. However, this abandoned footage suggests perhaps an entire sequence could’ve been cut. It could also be argued that these shots don’t appear in the final edit because, to benefit the pacing of the climax, it made more sense to combine the locations where Jyn and Cassian obtain the plans and the location where they transmit the plans to the Rebellion fleet.

Edwards also comments on how while there is a different version of the final battle, it will never be revealed because it never got very far into post-production, revealing that these “threads” didn’t even have finished visual effects. This is still a bit odd, considering there are many films which include deleted scenes in their bonus content that don’t feature fully finished visual effects.

READ MORE: ‘Rogue One’ Director Gareth Edwards Reveals How the Film’s Original Ending Was Much Different

While Edwards’ comments are certainly believable, its still confusing when paired with the reports that Disney brought in Tony Gilroy (“Michael Clayton“) and Christopher McQuarrie (“Jack Reacher“) to help supervise the final edit. It would be odd for the Big Mouse to bring in such talent just to help add or replace “moments,” especially when considering that they were apparently brought in to deal with the film’s original darker tone. Again, this information is contradicted by the Hollywood Reporter stating that apart of these reshoots attempting to lighten the tone was the film’s final Darth Vader scene. To avoid any major spoilers: it’s dark. Real dark.

Perhaps its pointless to worry about what could have been, considering the film was incredibly successful at the box office, and was generally well-received from fans and critics alike. But Edwards’ comments don’t offer any definitive conclusion regarding the film’s production mysteries, and that is what’s keeping us all the more intrigued.

“Rogue One” will be released digitally on March 24, and on Blu-ray on April 4.

This Article is related to: Film and tagged Fandango, Gareth Edwards, Rogue One: A Star Wars Story