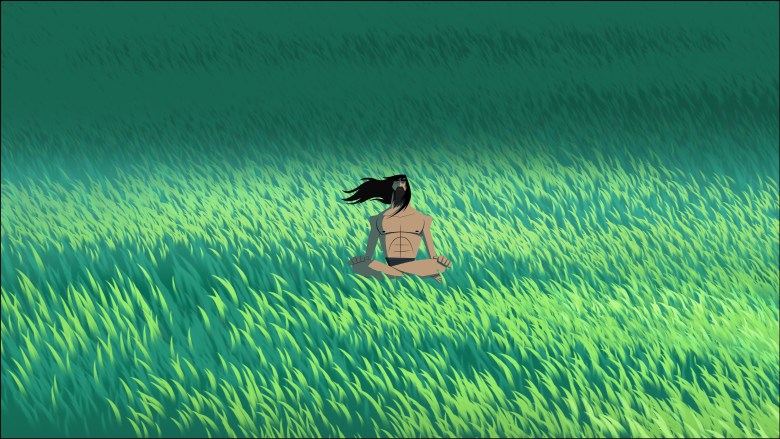 That explains why “Jack” has moved from Cartoon Network to Adult Swim as its 10-episode Season 5 premieres this Saturday. The series picks up 50 years later, but the eponymous hero (now sporting a flowing beard and armor and driving a motorcycle) hasn’t aged as a result of being hurled into the dystopian future.

As Jack journeys home, he’s lost in a psychological purgatory and losing his mind. He’s haunted by memories of the past and filled with guilt about abandoning his family. He even has ego-crushing,”Birdman”-like dialogues with himself.

That’s not to suggest that the series has lost its humor. For creator Genndy Tartakovsky, “Jack” continues to incorporate a Hanna-Barbera (where he began his career) influence.

And it’s been a redemptive experience for Tartakovsky, who’s much more at home with TV (“Star Wars: Clone Wars” and “Dexter’s Laboratory”) than features (Sony’s “Hotel Transylvania” franchise and the aborted “Popeye” and “Imagine This?” projects). Tartakovsky told IndieWire that he was compelled to complete “Samurai Jack” for much needed closure. “It’s strange: Jack came from a decade ago and what want to be true to what we’re doing — and we’re better at what we do,” the director said.

“And the great thing coming from features is you can be unshackled and have the support of the network. They want me for what I do, especially with ‘Jack’ and this last story, to make it as special and as unique as possible.”

But Tartakovsky was determined to have complete creative control. He didn’t want to have to justify his vision to a studio (he’s in the middle of making “Hotel Transylvania” 3). He first considered making the final chapter of “Samurai Jack” as a feature (but couldn’t get studio interest), before returning to TV.

Fortunately, when Cartoon Network executive vice president Rob Sorcher turned it over to Adult Swim’s Mike Lazzo, all Lazzo wanted to know was how much and how soon. The deal was completed in two weeks and Tartakovsky treated it as a mini-series.

Yet Tartakovsky, who has enjoyed getting back to boarding and animating, had to cope with a new TV landscape for animation, which relies on one-liners and non-sequiturs (“Rick and Morty,” “Adventure Time,” “Regular Show”). “I get nervous about it because we are trying to do our best to create this psychoticness that Jack is going through,” he said. Still, it’s justified with additional thematic tension, as Jack becomes more like the shape-shifting demon, Aku, who continues to dispatch robots to kill Jack. Now there are additional human foes as well, and Jack must confront the trauma of killing a person for the first time.

However, the strength of “Jack” remains its stunning 2D visual design, which looks bolder and more saturated, thanks to digital advances. Although it was risky changing the look of Jack, Tartakovsky embraced the more heroic and less cartoony design (courtesy of character designer Craig Kellman).

“The hardest part was trying to make it feel hand-crafted,” added Tartakovsky. “Digitally [with TVPaint], you can do so much, so fast, but getting an organic look is difficult. Scott Wills, our production designer, spent a lot of time creating brushes in the computer that mimic hand brushes. Each texture was unique.”

Ultimately, it’s about completing an arc for Jack that’s very new for TV animation: “If it works, it’s going to be very rewarding,” Tartakovsky said. “I want you to be connected emotionally. And I won’t know if we succeeded until we’re done.”