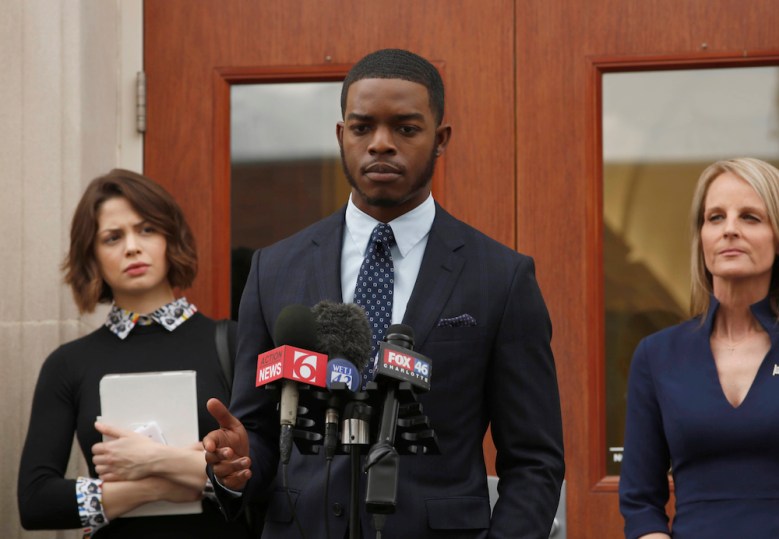 Given the success of  ABC’s “American Crime” and FX’s “The People v. O.J. Simpson: American Crime Story,” it’s unsurprising that there’s another limited series about American race relations. However, not only is “Shots Fired” engaging and (mostly) well-executed, it also does a great job of making itself distinct from its predecessors, and stands out for the right reasons.

“Shots Fired” opens on Deputy Joshua Beck (Tristan Mack Wilds), a scared cop pointing his gun at a body on the pavement. Blood pours from the unmoving victim as people pour out of their homes to get a better look; more officers arrive to section off the area. Phones come out and start recording. A cop new to the scene gets a little too rough with an onlooker. Tensions run high.

According to police reports, Deputy Beck shot the young man after a casual traffic stop led to a struggle over the policeman’s weapon. Beck fired. The young man died. People are angry. But unlike the reports we’ve grown used to seeing on the news, this was a black cop who shot a white kid. Aside from reversing the races of the shooter and the suspect, creators Gina Prince-Bythewood and Reggie Rock Bythewood keep things frighteningly close to familiar events: The young driver was stopped due to racial profiling (“a white guy in that area means drugs”); police discovered drugs in the vehicle, but only after the shooting; and there’s no video of the shooting itself.

Sensing tension in the fictional town of Gate’s Station, North Carolina (population: 65 percent black), the governor (Helen Hunt) calls for the Department of Justice to handle the investigation and makes it clear she wants the chosen prosecutor and investigator to be black. This brings us to Preston Terry (Stephan James) and Ashe Akino (Sanaa Lathan). Terry is fresh out of law school, but his year in the field has been so impressive they’re willing to give him a chance.

READ MORE: What We Learned About ‘Game of Thrones’ and ‘Veep’ at SXSW (Plus, What It’s Like to Be Gary!)

Far more fun is Akino, an officer who may have been on the job too long. She’s got a snappy retort for everyone, and only a couple of her rejoinders are cliched cop-talk. Lathan makes even those work, building an appealing temperament for Akino that charges her scenes with an intensely charming watchability. Similar to her partner’s athletic backstory (which brings in Dennis Haysbert as the first father in history to admit he wished his son played baseball instead of becoming an attorney), Akino’s off-duty plot line is fuzzy at best: She’s fighting for custody of her daughter with an ex-husband who seems like a stand-up fella beyond the one-dimensional woman he’s chosen to date who, while seen only briefly, comes across as horrible. These side stories push “Shots Fired” into extreme melodrama, and make for a jarring change of pace. When Terry and Akino stop flirting like moody teenagers, the 10-episode miniseries covers a vast amount of cultural terrain, venturing into what could be a corrupt police department, racial discrimination in murder investigations, a privatized prison system, the differing goals of politicians and activists, the caustic effects of casual racism, politicizing tragedy, and much more. Sure, a few characters are reduced to representatives — Aisha Hines’ Pastor Janae James speaks only in speeches, and Hunt’s governor is a stock politico — but their presence allows the series to engage in wider issues.

The series skirts some trickier questions in its storytelling speed, and a heavy focus on a seemingly separate murder mystery can make “Shots Fired” feel overly concerned with the wrong ideas. Still, each choice benefits the other more than it hurts: Episodes move swiftly, keeping up the pace to increase entertainment value and building an engaging whodunit that connects two police shootings.

Telling these morality tales with too much emphasis on eating your vegetables has failed to reach a wide audience (“American Crime”), and it’s been proven that a compelling core narrative can create an enlightening examination of America’s racial divide (“American Crime Story”). “Shots Fired” may lack the precision of its auteur-driven predecessors, but it’s taking its own path to starting a similar, vital discussion. That distinction alone is worth admiring.