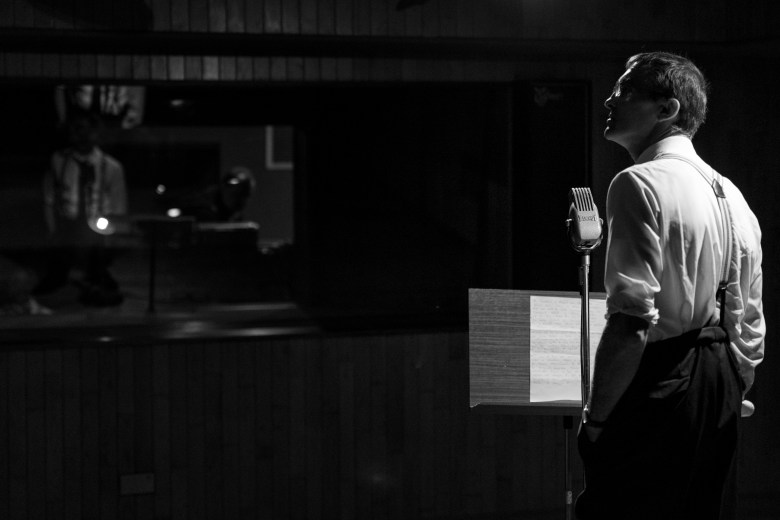 So often, films that focus on the rise or talent of a notable musician spend an inordinate amount of time insisting on that figure’s unmistakable genius. It’s refreshing, then, to see a film like Pat Collins’ “Song of Granite” that charts the origins and eventual rise of Irish folk singer Joe Heaney (Seosamh Ó hÉanaí) while giving equal time to Heaney’s surroundings. From Ireland’s breathtaking natural wonders to the citizens lining its streets and filling its drinking establishments, this continuous emphasis on both talent and environment makes for a far more satisfying portrait of an artist at all ages. Modest in subject but ambitious in form, “Song of Granite” delivers a profile of not just a singer but the country that made him.

Early on, Collins shows Heaney’s talent as inextricable from the village of Carna where he was raised. We see no formal vocal education, except for a handful of aphorisms, his father’s own singing example and the occasional chance for Joe to share his talent in a public place. Even as Heaney ages on-screen, the pursuit of any kind of musical career feels incidental to examining the cultural value that the youngster’s singing carries.

The script, co-written by Collins, Eoghan Mac Giolla Bhríde and Sharon Whooley, transitions from school-aged Heaney to a mid-career Heaney with little fanfare, certainly without the normal biopic conventions that mark the passage of time. Not content to piggyback off the pathos of a famous singer, “Song of Granite” takes some daring steps in structuring Heaney’s post-Carna life. Eventually, the striking tableaus of the Irish countryside give way to interspersed documentary footage showing urban, working-class labor. As Heaney becomes something of a folk-singing wayfarer (played and voiced by singer Mícheál Ó Confhaola), he carries an everyman quality along with him. Though one particular bit of documentary footage shows Heaney in front of a live audience, “Song of Granite” shows that the true effect of this music is felt in smaller venues. The film’s most electrifying sequence takes place in a crowded Glasgow bar with multiple patrons singing “The Rocky Road to Dublin” and “The Galway Shawl.” Even as the music reverberates beyond the frame, there’s a calmness to Collins’ staging and Richard Kendrick’s camerawork that would hypnotize even the staunchest folk song agnostic.

Collins’ patience dovetails nicely with the modesty and stillness of his subject. When that subject is set against a picturesque backdrop, Collins makes full use of Ireland’s picturesque vistas. The black-and-white photography (its most well-earned use in a music film since Anton Corbijn’s “Control”) helps give the film the timeless quality it needs to bridge three generations, but it also underlies the simplicity of Heaney’s unadorned voice.

Whether it’s the freshly recorded voice of Heaney’s father or those patrons in the bar decades later, “Song of Granite” posits Irish folk music as a mythic, oral tradition, greater than any one individual could transcend. Heaney’s story shows that this is music that doesn’t originate with a spark but is carefully honed over the course of centuries, manifesting itself in magnetic talents.

The film’s final act, which follows a faux-documentary Heaney in the years before his death, proves that all three versions of the man carry with them a certain world-weariness. Even Young Joe (Colm Seoighe) appears on screen with a spirit that even his teachers acknowledge is beyond his years. These distinct sections carry with them a hint of the familiar (the origin story, the struggle, the late-life glimpses at a legacy). But Collins surrounds each of those elements with enough of the fabric of Irish life and enough of the uniquely cinematic flourishes to give extra weight to Heaney’s craft. Collins occasionally overemphasizes the film’s conversation between generations, making a literal one between boy and man towards the film’s close. Unmoored from most of the traditional biopic checkpoints, the film also veers a bit far into the ethereal to feel the true heft of the more tragic episodes in Heaney’s life. But there is still an impressive sense of scale and scope that comes from watching one man’s journey through the 21st century evolve in such a natural way.

READ MORE: The 2017 IndieWire SXSW Bible: Every Review, Interview and News Item Posted During the Festival

Joe Heaney may not be a household name in many places outside of his native country, but this film makes a strong case that his contributions (and those of his fellow sean nós singers) aren’t confined to the musical realm. For an artist whose work in a proud and robust tradition carried a recognizable grace, “Song of Granite” is a stirring, solemn tribute.

“Song of Granite” is playing in the 24 Beats Per Second section of SXSW 2017. It is currently seeking U.S. distribution.

This Article is related to: Film and tagged Reviews, SXSW 2017