Season 7, Episode 13 focuses on Morgan at the expense of everyone else. 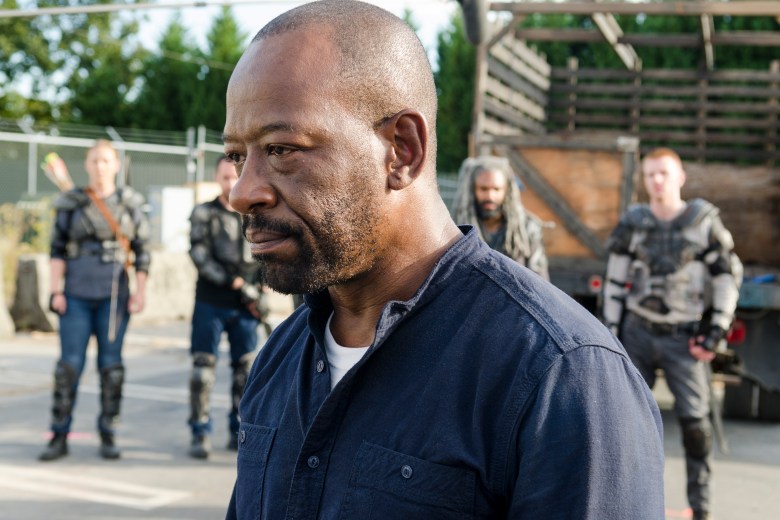 We’re with the Kingdom this week, and Morgan takes center stage. Morgan’s story this week is so central, in fact, that his decisions eclipse the ostensibly important key decisions of other characters, dulling the impact of the overall story. It also doesn’t help that the first half of “Bury Me Here” plays out in extremely predictable fashion.

I’ve always been fascinated by the way “The Walking Dead” approaches Morgan, since he’s one of the only characters to preach non-violence on a show that often endorses the opposite (remember when Tyreese got put in the “Kill more or I kill this baby” situation?). So it was probably just a matter of time before the show found a way to get Morgan back on the murder train, and that’s what “Bury Me Here” seeks to do. And boy, is it depressing. Not the episode itself, since it’s grim in the same-y way many episodes of this show are grim, but that the writers felt the need to sacrifice Morgan’s pacifism to raise the stakes in everyone’s conflict with the Saviors.

I take no pleasure in correctly predicting that it would be Benjamin’s death which spurs the Kingdom to join Rick’s rebellion, considering it was such an obvious call. Benjamin spends the first third of “Bury Me Here” walking around like Dead Meat from “Hot Shots!”, reminding everyone that he’s caring for a young boy, telling Morgan and Ezekiel how much they mean to him, insinuating that he’s got a new girlfriend. He might as well have a neon sign around his neck that says “not long for this world.” Things are pretty ominous on the way to the usual Savior supply drop, as the Kingdommers find their path blocked by a row of shopping carts, along with a freshly dug grave with a sign reading “Bury me here.” And if that’s not enough, Ezekiel is somehow one melon short on his delivery to the Saviors, and Benjamin gets shot in the leg as a message. Morgan and the others get him to Carol’s, but he bleeds out on her table. This causes Morgan to go into a fugue state, flashing back to his “clear” days and contemplating ending it all, until he kicks an overturned container in frustration… and finds the missing melon.

No points for guessing that it was Richard who set the whole thing up, considering he was contemplating a much more convoluted frame job of Carol a few episodes ago. Somewhat to his credit, Richard confesses his whole plan to Morgan, claiming he thought the Saviors would kill him instead. Richard wants to make things right with the Saviors for now so that they won’t suspect that they’re moving against them. Morgan seems to be going along with Richard’s plan until the next meet with the Saviors, when he suddenly attacks Richard and strangles him to death in front of everyone. Everybody stands perfectly still while this happens, I guess because Morgan has that “I’m in the opening credits” magic that keeps lesser characters from interfering with him, even when he’s killing Ezekiel’s #2 guy right in front of him.

Once Richard’s dead, Morgan explains the whole situation to Ezekiel and the Saviors, then begins co-opting the language Richard used with him, indicating that he’s adopting Richard’s plan as his own. Morgan heads to Carol’s and tells her about all the Alexandrians Negan killed. He’s going to head off to kill them, but Carol offers him her cottage, just as Ezekiel offered it to her when she was lost. He stays, sharpening his stick to a point, while Carol heads to the Kingdom where Ezekiel is waiting for her, having decided to fight as well.

There’s no argument that Benjamin’s death would affect Morgan, considering that the two were close, but previous episodes established that Ezekiel felt personally responsible for Benjamin (since he got his dad killed), not to mention that he’s known him for years, so Ezekiel’s almost blasé response to the whole turn of events is pretty baffling. Benjamin’s is a death that should resonate with him, but while it hits Morgan like a freight train, Ezekiel seems to treat it as business as usual. Not to mention that the heavy focus on Morgan pushes Ezekiel’s decision to go to war so far to the episode’s outskirts it may as well not exist. There’s a bit of business in the middle of the episode where Ezekiel’s garden has to be burned to get rid of a weevil infestation, and one of his underlings helpfully points out that it will all grow again even after the conflagration, but it’s all pretty weak. As so often happens on “Walking Dead,” it feels more like a plotting necessity than a decision rooted in character. If the episode does a disservice to Ezekiel, it’s even worse with Carol, whose decision to return to the fold is given all the weight a few minutes of screen time can muster. The writers have been pretty adrift with Carol since she left Alexandria, and this is no exception. She finds out about Alexandria, so she chooses to end her exile. It’s as exciting and substantial as reading that sentence.