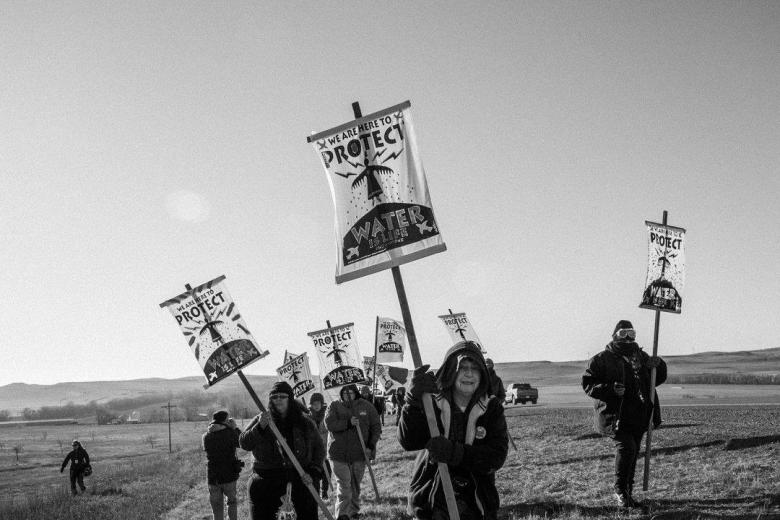 “Awake, A Dream from Standing Rock”

The Tribeca Film Festival announced programming today for its N.O.W. (New Online Works) section, an inspired array of established and emerging creators who are pushing the boundaries of online storytelling.

Top-lining the section is the premiere of “Awake, A Dream from Standing Rock,” a documentary from the Oscar-nominated team of Josh Fox and James Spione and Executive Producer Shailene Woodley. The project is a collaboration with indigenous filmmaker Myron Dewey about the Native-led resistance against the Dakota Access Pipeline. Eli Roth’s Crypt TV will premiere “Monster Madness,” a series of several character shorts; and Op-Docs, The New York Times’ award-winning forum for short, opinionated documentaries, will screen three films at the Festival.

The N.O.W. Showcase is a curated selection of 10 independent online creators’ latest work. In the past, N.O.W. provided an early industry platform for Ben Sinclair and Katja Blichfeld’s “High Maintenance,” currently on HBO; as well as Brian Jordan Alvarez’s Gotham Award-nominated “The Gay and Wondrous Life of Caleb Gallo.”

The entire program is listed below:

“Awake, A Dream from Standing Rock”
Directed by Josh Fox, James Spione, Myron Dewey, written by Floris White Bull, Josh Fox, Myron Dewey
Executive produced by Shailene Woodley
A documentary about the Native-led defiance that forever changed how we fight for clean water, our environment and the future of our planet. Out of This World: Female Filmmakers in Genre
“YOYO”
Directed by Nicole Delaney
Caroline can’t stand that she is a virgin…And then the world ends. In post-apocalyptic Los Angeles, after a dust storm has wiped out humanity, she meets Francis and is convinced that he’s the man to pop her cherry. YOYO is a heartfelt, dark comedy about finding meaning in life, even when life ceases to exist.​ Presented by DUST and Gunpowder & Sky.

“Two Sentence Horror Stories: MA”
Directed by Vera Miao
Like many traditional Chinese families, Mona still lives at home with her stern but loving Ma. When she meets cute Erica, their instant chemistry awakens something dormant inside. But Ma is not going to let her daughter go easily. Because nothing is allowed to come between a mother and daughter. A Stage 13 production.

“Pineapple” (Episodes 1 & 2)
Directed by Arkasha Stevenson
The local coal mine in the town of Black Rock becomes a crime scene when a miner’s daughter is assaulted in its tunnels. She utters only one word, which leaves the town baffled: “pineapple.” Tensions rise as the mine’s opportunistic owner uses the investigation as an excuse to shutter the dying operation indefinitely. An Adaptive Studios production.

THE NEW YORK TIMES’ Op-Docs
“Undue Burden”
Directed by Gina Pollack
When you live in a state with laws that restrict access to abortion, an unwanted pregnancy is only the start of your difficulties.

“Taller Than the Trees”
Directed by Megan Mylan
Japanese men haven’t traditionally been caregivers. But for Masami Hayata, it’s a crucial part of raising his family.

“Hotel U.S.A.”
Directed by Andrea Meller & Marisa Pearl
For refugee families, the very first night in the U.S. can be an exciting and bewildering experience.

“The Holdouts”
Directed by Ramon Campos Iriarte (Colombia)
The Western hemisphere’s oldest civil war is still going strong in the jungles of Colombia. The National Liberation Army (ELN) —a Marxist military organization— has been fighting for revolution since 1964, and with the FARC having declared a ceasefire, the ELN is today the last active guerrilla army in the Americas. In Spanish, English with subtitles.

“New Deep South”
Created by Lauren Cioffi and Rosie Haber
This series explores the vibrant and multifaceted queer culture emerging in the American South. Playing against old stereotypes of Mississippi as a state of social conservatism and stagnation, we follow the lives of queer youth to explore the tangled and complex nature of sexual identity in the New Deep South.

“Woman of a Certain Age”
Created, written by, and starring Kate Dearing, co-directed by Amanda Cowper and Sami Kriegstein and co-produced by Dearing, Cowper and Kriegstein
Kate confronts the daily challenges of being an adult, she is spontaneously visited by versions of herself at different ages – each offering their “best” advice. Like “A Christmas Carol” but without the pesky morals, Woman of a Certain Age explores what happens when we actually listen to the voices in our head.

“HEROIN”
Directed by Jessica Beshir
For an artist, free will is just an illusion. Heroin explores the creative process, inspiration and alternative reality of an artist.

“I LIVED: Brooklyn”
Directed by Jonathan Nelson and produced by Danielle Andersen
An investigation of the intricacies of place and identity in the borough’s distinct neighborhoods.

“Phone Calls”
Co-directed by Bonnie Wright and Martin Cohn (USA)
An anthology series of conversations exploring the way people speak to each other when not face to face. Free of physical proximity, a space is born in which personal truths and, often times, ugliness is unleashed by those closest to you as well as those most foreign.

“The Show About The Show”
Directed by Caveh Zahedi
Caveh Zahedi’s self-referential scripted meta-series about a Brooklyn filmmaker trying to make a TV show. Co-starring Alex Karpovsky, Eleonore Hendricks, Dustin Defa, and a who’s who of Brooklyn’s independent filmmaking community, it tells the story of everything that can and does go wrong in trying to get a television series funded, produced, and distributed. This Article is related to: Film and tagged Digital, Shailene Woodley, Tribeca 2017