Independent pilots will also be screened at the festival for the first time. 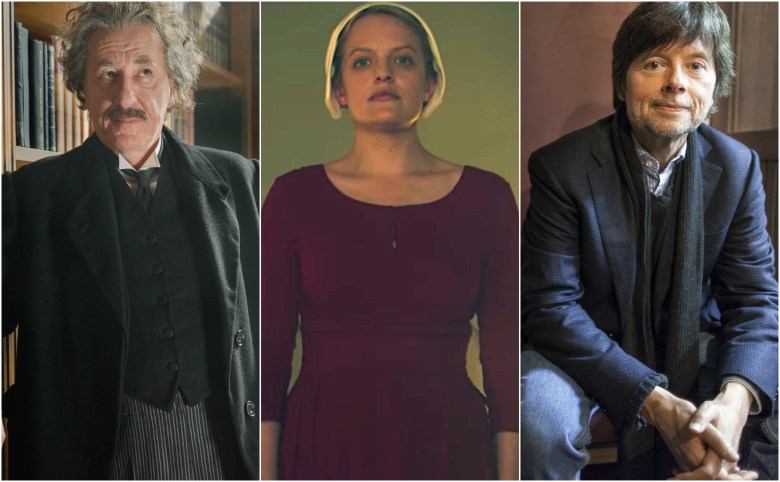 The Tribeca Film Festival announced its second annual Tribeca TV program on Thursday and it includes a range of world premieres, popular show returns and a slate of independent pilots. One of the most highly anticipated debuts will be Hulu’s adaptation of Margaret Atwood’s dystopian novel, “The Handmaid’s Tale.”

The series has been in the news lately, and not only because it will premiere soon. The dystopian story about a government forcing fertile women to become breeders for their high-ranking officials has struck a nerve among progressive women who are wary of having their health and reproductive rights controlled. Recently, protestors dressed in the handmaids’ red robes and white bonnets made an appearance in the Texas Senate gallery as its members were passing abortion legislation.

The TV lineup also boasts premieres for NatGeo’s “Genius,” a series about the life of Albert Einstein, and USA’s “The Sinner,” which stars Jessica Biel as a young mother who kills a stranger out of the blue. Also of note is a special sneak peek of Ken Burns’ upcoming documentary “The Vietnam War.” The acclaimed documentarian will also receive the Citizens Filmmaker Award.

Here’s a video of the programs, and check out the full lineup, with descriptions provided by Tribeca, below. The Tribeca Film Festival begins on April 19 in New York, NY.

“The Eyeslicer”
“The Eyeslicer” is a new variety TV show that brings the next generation of alternative American filmmakers together under one strange roof. The hour-long show will slice, dice, and then mince your eyeballs into delicious ceviche. Each episode is a handcrafted mixtape, blending boundary-pushing short form work into into a weird, wild, uninterrupted whole. “The Eyeslicer” premieres at Tribeca with the episode “Facial Reconstruction,” featuring work from acclaimed indie filmmakers Lauren Wolkstein, Erin Vassilopoulos, Shaka King, Danny Madden, and Leah Shore.

”Genius” (National Geographic)
“Genius” charts how Albert Einstein (Geoffrey Rush), an imaginative, rebellious patent clerk who struggled to land an academic post in his early years, went on to become the greatest scientific mind of the 20th century. The show explores his rise as he juggles his volatile, passionate and complex personal relationships. Based on Walter Isaacson’s acclaimed biography. ”The Handmaid’s Tale” (Hulu, MGM)
Based on Margaret Atwood’s acclaimed novel, “The Handmaid’s Tale” is the story of Gilead, a modern-day totalitarian society facing environmental disasters and a plunging birthrate, ruled by a fundamentalist regime that treats women as property. As one of the few fertile women, Offred is forced into sexual servitude in a desperate attempt to repopulate the world. In a society where one wrong word could end her life, Offred has one goal: survive and find the daughter taken from her.

”The Sinner” (USA)
A young mother is overcome by an inexplicable fit of rage and commits a startling act of violence. The event launches an inverted and utterly surprising crime thriller whose driving force is not the “who” or the “what”—but the “why”—as an investigator finds himself obsessed with uncovering the woman’s buried motive. The Sinner is a riveting psychological thriller, stylishly directed by acclaimed filmmaker Antonio Campos (“Afterschool,” “Christine”). “Soundtracks” explores seminal moments in history through the music that defines them. Featuring original interviews with legendary musicians as well as celebrated journalists, historians, and writers, the series reveals how music has been a driving force behind social change. In a Tribeca screening at the 9/11 Memorial & Museum in New York, the show will explore how songs like Billy Joel’s “New York State of Mind” took on new and heightened meaning, as music took center stage for a country fighting to heal. Co-hosted by the 9/11 Memorial & Museum.

”There’s… Johnny!” (Seeso)
It’s 1972, and everyone goes to bed together… with Johnny Carson, TV’s biggest star. 19-year-old Nebraskan Andy Klavin stumbles his way into a gig as a gofer at Carson’s  “The Tonight Show” and into a world that will change his life. “There’s… Johnny!” takes a fictional comedic trip back in time, to go behind the man in front of the curtain, and look at the lives and loves of the people who make all of America laugh. ”Another Period” (Comedy Central) — Season 3 World Premiere
“Another Period” tells the incredible story of the Bellacourt sisters, Lillian and Beatrice (played by Natasha Leggero and Riki Lindhome). Defined by their family’s wealth, they care only about becoming super famous— which is a lot harder in 1902. The show follows the insanely decadent and outrageous life of the Bellacourt coterie. Before others claimed their fame, they were the one American family who epitomized all that was spoiled, shameless and stupid. The Bellacourts have more servants than relatives and days filled with money, sex, drugs…and more money.

After the episode: A conversation with creators, writers, and stars Natasha Leggero and Riki Lindhome, and cast members Paget Brewster and Brett Gelman.

Wednesday, April 26, 6:15 PM, SVA-2 Season 3 returns with everyone’s favorite co-dependent siblings Valerie and Alex. They continue to live deep in each other’s emotional lives as they raise Valerie’s daughter Laura. Following dramatic life changes at the end of the last season, Valerie and Alex are adjusting to a new normal while continuing to struggle to maintain boundaries with each other.

”Episodes” (Showtime) – Final Season Premiere
“Episodes,” the award-winning, razor-sharp comedy about the insanity of making a television show, returns for its fifth and final season. Lauded English television writers Sean and Beverly Lincoln were lured to Hollywood to adapt their much-loved British boarding-school comedy, Lyman’s Boys. Their American network has mangled the show into “Pucks!,” a sitcom about a high school hockey coach starring Matt LeBlanc (played brilliantly by himself). After a dismal run, the sitcom was finally put out of its misery. Now Sean and Beverly struggle to create a successful new project  in this country without completely losing their integrity, while Matt desperately attempts to revitalize his disappearing acting career.

After the episode: A conversation with creators David Crane and Jeffrey Klarik, and cast member Matt LeBlanc. Moderated by editor for New York Magazine and Vulture, Stacey Wilson Hunt. ”Unbreakable Kimmy Schmidt” (Netflix) – Season 3 World Premiere
After living in a cult for fifteen years, Kimmy (Ellie Kemper) decides to reclaim her life and start over in New York City. Season 3 opens with Kimmy in an unfamiliar position with the Reverend back in her life. Meanwhile, Titus returns from his cruise and auditions for an exciting new role, and Lillian has to break up with her boyfriend Robert Durst.

“Black Magic for White Boys”
An aging magician is about to lose his small New York theater, but has a devilish plan to save it. A middle-aged man finds his sovereignty in jeopardy when he impregnates a woman he barely knows. A real estate mogul is frustrated that he can’t raise the rent on this tenants. These characters converge in Tribeca alum Onur Tukel’s bizarre comic tale about testing boundaries, gentrification, and how old New York is fading away. With: Onur Tukel, Ronald Guttman, Jamie Block.

”Lost & Found”
Stella and Ian are separating. But for this modern LA couple, that’s nothing to be sad or ashamed about. They decide to host an “un-wedding” party to celebrate. As friends and family descend on their home for the occasion, secrets are revealed and loyalties tested in this comedy-drama about family, friendship, and marriage. Melonie Diaz, Will Janowitz, Jennifer LeFleur, Terence Nance, Avi Rothman, Laura Lee Botsacos, Abby Wathen, Nick Thurston, Haroula Rose, Ethan Gold.

”Manic”
Aurora Carter, an Ivy League-bound, AP Exam enthusiast finds that her over-achieving obsessiveness lands her in a boarding school for kids with mental illnesses. Now she has a singular goal: prove she doesn’t belong with the rest of the freaks. Determined to fight the system, Aurora makes alliances with the other girls one by one and inspires them to take control of their lives. With: Shanice Williams, Dot-Marie Jones, Russell Andrews, Nicki Micheaux, VyVy Nguyen.

”I Am Heath Ledger” (Spike TV)
Told through excerpts of his greatest performances, interviews with friends and family (including Ben Mendelsohn, Naomi Watts, Ang Lee, and Ben Harper), and the lens of his own camera, “I Am Heath Ledger” is an intimate celebration of the actor, artist, and icon. An artist of exceptional depth and courage, Ledger was equally talented behind the camera. This stirring documentary paints a rich portrait of one of the great artists of his generation. From co-directors Derik Murray and Adrian Buitenhuis. Ken Burns and Lynn Novick’s 10-part, 18-hour documentary series tells the epic story of the Vietnam War as it has never been told before. Featuring testimony from nearly 100 witnesses, including Americans who fought in the war,t hose who opposed it, and Vietnamese combatants and civilians from both the winning and losing sides. “The Vietnam War” is an immersive, 360-degree narrative of a seminal period of history.

After the episode: A conversation with filmmakers Ken Burns and Lynn Novick.

This Article is related to: Television and tagged Genius, The Handmaid's Tale, The Sinner, Tribeca 2017