From damn fine coffee to Los Pollos Hermanos, a rundown of the finest TV stunts at SXSW. 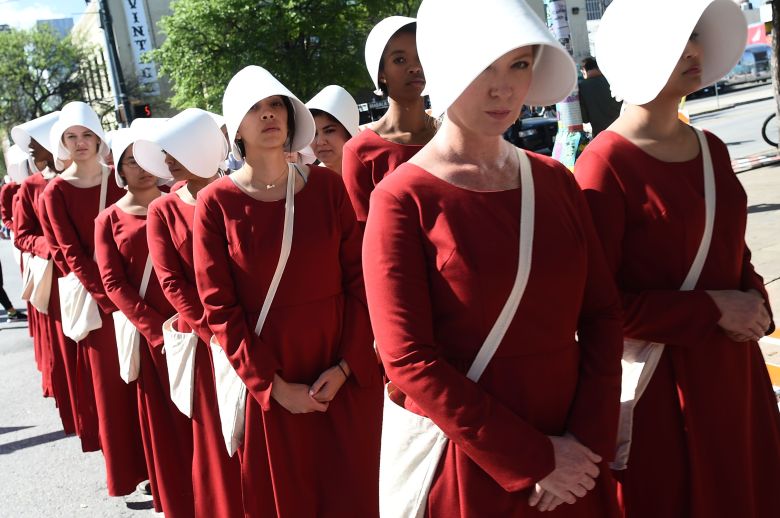 The handmaids take over SXSW.

As social media now provides ample exposure, TV and film event promotions — or as the marketing people like to call them, “activations” — have become increasingly elaborate.

And who can blame them: While thousands of fans come to SXSW, they also face infinite entertainment options. If you’re going to sell them on hanging out with your show, you’ll need to give them a good reason to do it. And if they’re going to share the best of the best, it better look cool on Snapchat and Instagram. Here’s a look at how the networks tried to woo SXSW.

READ MORE: The 2017 IndieWire SXSW Bible: Every Review, Interview, and News Item Posted During the Festival

Most Haunting: “The Handmaid’s Tale”

The upcoming Hulu adaptation of “The Handmaid’s Tale,” starring Elisabeth Moss, takes top honors for the most most effective — and the creepiest — installation. Hulu filled the streets of Austin with groups of silent women in red cloaks that marked them as handmaids for the men of Gilead (aka, no rights, not allowed to read, exist only to bear children). Bystanders unfamiliar with the Margaret Atwood story may have been confused, but it got people talking. Recent promos teased the return of Gus Fring, so you might expect a reference to the notorious drug kingpin/restaurateur. AMC did not disappoint: They installed an actualLos Pollos Hermanos pop-up at the festival, although they didn’t serve the fried chicken. Fans had to make do with free curly fries and dipping sauces.

[Spoilers for Season 1 of “Preacher]

The last time we visited the desolate town of Annville, the townsfolk found out God was missing (but were able to meet his impersonator); Jesse, Tulip, and Cassidy embarked on a journey to find the actual God; oh, and Annville was destroyed by a methane explosion. In reference to the prior season, AMC created an activation of Jesse’s now-destroyed church. The incredible display features a replica of the church turned completely upside down atop rubble from the explosion, with a sign in front that reads “all signs lead to preacher Jesse.” Billboards were also on display with the hashtag #welcometoannville written across an ominous-looking background, suggesting a hellish journey for Jesse Custer when season 2 airs June 19. Starz’ highly anticipated adaptation of Neil Gaiman’s novel, “American Gods,” unveiled one of the strangest activations with a 23-foot-tall white buffalo. Towering above everyone at the festival, the hard-to-miss buffalo is an homage to the recurring image of the white buffalo in Gaiman’s story. While the first episode of the series screened at the festival, the show will make its debut Sunday, April 30.

#AnimalKingdom brought SoCal to Austin for #SXSW. Watch the Cody boys surf the flowride pool like the badasses they are. pic.twitter.com/DG5F9iG0uj

Promoting the second season of  “Animal Kingdom,” TNT built a pop-up beach recreating the Oceanside, Calif., location of the crime-drama. The activation included a surf simulator, beer garden, live graffiti wall, and a sneaker bar where custom sneaker-artist Jake Danklefs displayed some of his designs inspired by the show. Fans also got to meet some cast members when they dropped by the activation.

Best Anti-Fascist Pitstop: “The Man in the High Castle”

To promote its original series “The Man in The High Castle.” Amazon created its own radio station, and took over The Market & Tap Room in downtown Austin, remodeling it as the Resistance Radio Headquarters. Guests could immerse themselves into the show’s World War II setting and enjoy resistance-inspired cocktails such as Rising Sun, Transmission Intercepted, H Bomb, and The Flying Grasshopper. The perfect spot for fans looking to drink and resist against a fascist government. The Escape Room for “Prison Break”

“Prison Break” is back with a nine-episode event-series premiering April 4. In anticipation of the show’s revival, Fox created the appropriate-if-obvious activation with an escape room at The Escape Game Austin. The free event was also visited by the main cast of the show. It’s been over 25 years since Special Agent Dale Cooper had some damn good coffee, but “Twin Peaks” is returning with its own revival series set to premiere on Showtime May 21. In anticipation of the cult-classic’s return, Showtime took over Austin’s Clive Bar and turned into the Double R Diner. Fans were able to enjoy some, yes, damn good coffee, cherry pie, and Voodoo Doughnuts.

HBO: The Escape was designed as an escape-room style experience, allowing fans to navigate through themed rooms from “Game of Thrones,” “Silicon Valley,” and “Veep.” Participants had to find clues in order to make it to the next room; once teams successfully escaped, they could take a picture on the iron throne and enjoy a brief moment as King of the Andals and the First Men, Lord of the Seven Kingdoms, and Protector of the Realm. It’s not a TV show, but puppets! Everyone loves puppets, except maybe when you have a hangover. However, Kimo Sabe (billed as the exclusive mezcal of SXSW) hired puppeteer Sam Lasseter, son of John Lasseter, to design three massive puppets for their activation at the Trusted Friend Lounge: a 14-foot Deity and two six-foot horse heads, which are supposed to represent the Trusted Friend.