Saddled with the most boring role, Viola Davis builds something out of nothing in a Lifetime movie that does the opposite. 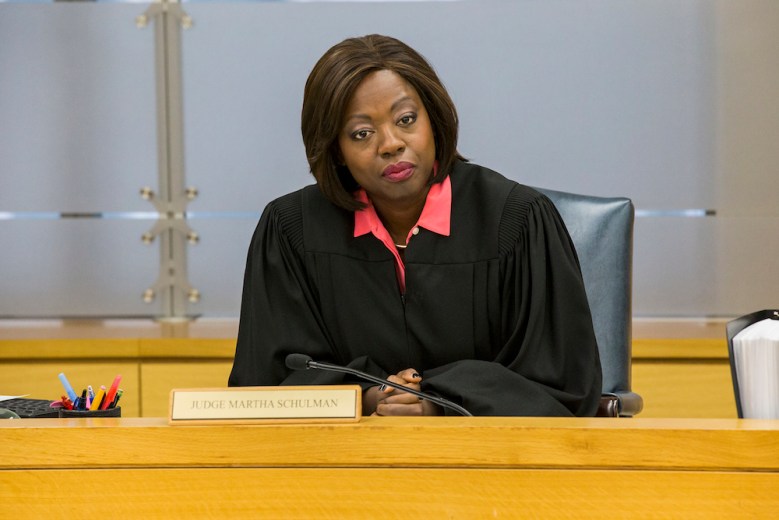 “Custody” is the cliched wedding toast of movies. Actually, it’s the drunken cliched wedding toast of movies, in that it starts by defining the title — “the protective care or guardianship of someone or something,” in case you’re unfamiliar with the lofty legal term — before spiraling wildly off-topic, delving full-on into the lives of the wedding guests and often forgetting why these stories are relevant to the happy couple.

In other words, it’s a mess, and if you’re purely interested in Viola Davis’ involvement, I urge you to skip to the first and only paragraph below staring with “Viola Davis” (or the one ending with “our beloved Vi Vi”).

To continue the wedding analogy, the happy couple at the heart of “Custody” is Sara Diaz (Catalina Sandino Moreno) and her kids. A single mother working at a dry cleaner, Diaz is constantly worried about her kids getting into trouble, so when her son is caught partying downstairs when she returns home from a long day at work, she flips out a little bit. Dragging him upstairs to their home, Ms. Diaz loses her grip on the boy’s arm as he twists away, and he falls face first into a glass coffee table.

The next day, a teacher notices cuts on his arms and boom — the kids are taken away from their mother. After a panicked, resentful Ms. Diaz berates everyone who could possibly help her find her kids, she ends up in court face to face with a woman who will not stand for any shenanigans. Judge Martha, played by — you guessed it — Viola Davis, is a good judge (as we’re told by various characters throughout) who knows how quickly cases need to be handled and how carefully this one in particularly demands to be treated. You see, the news is awash with coverage of a little girl who died in her home from starvation. Her parents weren’t there, and the agent in charge of her case is now in charge of Ms. Diaz’s. Now, there are a plethora of details that would demand discussion had we the time, but “Custody” simply doesn’t merit a point-by-point breakdown, so let me just say this: Among the film’s many subplots that lead nowhere — including Judge Martha’s marriage problems — Ms. Diaz’s lawyer is perhaps the most head-scratching. Ally Fisher (Hayden Panettiere) is a trust fund kid fresh out of law school and working in the public defender’s office. Her first case is Ms. Diaz, and by all accounts, she’s a good lawyer. When Ms. Diaz exhibits extreme, borderline unhinged, emotional reactions, tests positive for drugs, and lies to the court (more than once), Ms. Fisher somehow keeps her in the good graces of Judge Martha… but why we need to dig into her complicated past with a family otherwise disconnected from the case is only explained by a forced line of dialogue at the film’s end. It’s extraneous, and it feels extraneous even though the great Ellen Burstyn plays Fisher’s cowardly grandma.

The film ultimately sums itself up as most legal dramas do: in court. [Editor’s Note: Spoilers ahead for a movie that could only be spoiled for viewers who’ve never seen a movie before.] Judge Martha hands out a “happy ending” (as she calls it) to Ms. Diaz, and then patiently listens as the suddenly non-temperamental plaintiff (looking her absolute best, for the first time in the film) calmly explains a carefully worded speech about how this may be a happy ending for Ms. Diaz, but she has to deal with traumatized children who’ve been without her for three months. She has to make up the hours missed at work, and she has to keep on living with this catastrophe.

Judge Martha, justifiably unmoved by the ignorant speech, kindly replies by explaining how the court has to handle these matters carefully, and Ms. Diaz would be wise to try to understand the court’s position, as well. “You don’t know me!” Ms. Diaz snaps back, which Judge Martha routinely replies, “You don’t know us either.”

And that right there is the summary of the film: We should all be a little more considerate of each other’s feelings. Ms. Diaz may have been worried about her kids, but she should’ve been thinking about Judge Martha’s marriage problems. And Judge Martha may have been dealing with a cheating P.O.S. husband, but she should have personally investigated the source of Ms. Diaz’s obvious rage issues. Somehow, with all this understanding, the flaws in our justice system would be solved. A little girl wouldn’t die from starvation while her mother was in a crack den, and the court could’ve quickly and easily given children back to a mother who’s got traces of PCP in her blood and desperately needs anger management counseling. Viola Davis has finally won her Oscar. And thank God for that. Her layered, deeply felt performances have left an impact on everyone lucky enough to see them over the years. In everything from “Solaris” to “Far From Heaven” and “Doubt” to “The Help,” Davis has committed 110 percent to her characters, leading her to larger and larger stardom as each triumph eventually built to the singular victory all actors covet: an Oscar.

A deserved one, at that. While there are dozens of reasons to be excited about her win, there’s one result we hope to see go into effect immediately: She won’t be tempted (or forced) to appear in any more terrible projects. Even after her first Oscar nomination, her resume is peppered with films and TV shows we otherwise would not have watched: “Suicide Squad,” “Ender’s Game,” “Lila & Eve” (OK, OK, that one is kind of fun), “Beautiful Creatures,” “Law Abiding Citizen,” and “Madea Goes to Jail” — yup, “Madea.”

Now, considering how horrifically dominant the patriarchy remains when it comes to good roles for women, we are not casting blame on the whip-smart and generally awesome Ms. Davis. We’re simply pointing out an unfortunate conundrum facing her fans — especially ones who see her name on the poster and immediately buy a ticket. We want more of this. We want to encourage this. We want everyone buying every ticket for a Viola Davis picture, which is why it hurts doubly when these projects are not worthy of her talents. (Call me crazy, but her bonkers Shondaland hit, “How to Get Away with Murder,” also falls under this category.)

“Custody” can now officially join the club. But hey, let’s stay positive: It might be the last one!

“Custody” premiered at the 2016 Tribeca Film Festival. It debuted for the public Saturday, March 4 on Lifetime.