Molly Ringwald, Luke Perry and more are back doing teen projects, but this time as the authority figures. 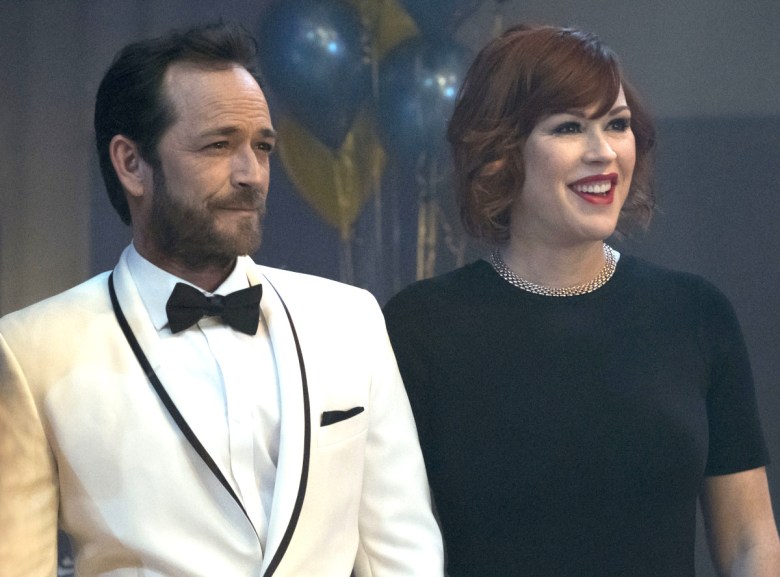 More than 30 years after enduring “16 Candles,” Molly Ringwald is heading back to the school dance, and “Riverdale” couldn’t be happier.

The former teen icon, known for her membership in the ‘80s Brat Pack and her John Hughes pedigree, guest stars on Thursday’s “Riverdale” as Archie’s mom Mary. She and her estranged husband Fred (Luke Perry) will be back together temporarily to see their son perform at the high school dance. While the casting was a natural fit because of Ringwald’s red hair, her teen star cred also helped. Both “Riverdale” and “13 Reasons Why” are two teen-centric shows that have been bringing back former teen stars to play the older generation, and reaping the benefits.

READ MORE: ‘Twin Peaks’ and Beyond: The Best Shows From ‘Riverdale’ to ‘Veronica Mars’ That Were Inspired by David Lynch’s TV Phenomenon

While this type of casting isn’t exactly groundbreaking, it’s only happened occasionally in the past, usually with sequel series like “Girl Meets World,” which brought back the “Boy Meets World” stars as the adults, and “90210” bringing back Jennie Garth, Tori Spelling and Shannen Doherty to reprise their “Beverly Hills, 90210” roles. The typical high school shows haven’t been en vogue for a while though, and shows like “Riverdale” and “13 Reasons Why” have stood out by putting a twist on the genre, whether it’s with a gothic murder mystery plot or an exploration of teen suicide. They both have also made a push to appeal to older viewers by including the adults on the show in substantial storylines of their own.

Over on The CW’s “Riverdale,” the teen idol casting is the strongest, with “Beverly Hills, 90210’s” Luke Perry playing Archie’s dad opposite Ringwald as the mother, “Scream’s” Skeet Ulrich as Jughead’s dad and “Head of the Class” star Robin Givens as Josie’s mother. Even Mädchen Amick, who plays Betty’s mom, had played a high school student on “Twin Peaks,” a thematic ancestor of “Riverdale.” While not quite as crowded, the cast of Netflix’s “13 Reasons Why” also boasts its own stars who’ve enjoyed past teen glory: Tom Everett Scott (“That Thing You Do”) as Tyler’s dad, Keiko Agena (“Gilmore Girls”) as a teacher, and Wilson Cruz (“My So-Called Life”) as the lawyer hired by Hannah Baker’s parents. At a recent screening for press, “Riverdale” creator Roberto Aguirre-Sacasa and a few of the cast members addressed what this kind of casting adds to the show.

“I think the casting and the setting and the feeling of the show rides a fine line between the old and the new,” said Cole Sprouse, who was a child star since he was a baby and now plays Archie’s pal Jughead in the series. “I think one of the primary themes is nostalgia, and being that it’s an Archie Comics property, nostalgia seems to be the thing that people enjoy quite a bit of. For the actors and the settings and the feelings and the cars and the atmospheric fog, I think if people find that nostalgia in interesting ways and see the nostalgia filtered through every scene, every location, I think it’s something beautiful and can play to something nice.”

This type of rewind-casting can also create a sense of continuity. On “13 Reasons Why,” it would be easy to pretend that “Gilmore Girls” character Lane Kim (Agena) switched to contacts and decided to teach high school to pay the bills when she wasn’t pursuing her music.

“It is nice when Mary appears and it’s Molly Ringwald,” said Aguirre-Sacasa. “I do think people are like, ‘Oh good! It’s Molly Ringwald, and I like that!’ That does give us a shorthand, but it all has to work on every level. Everyone who’s up here was cast because they felt like the perfect embodiment of this character and the show.”

Seeing these adults still embroiled in similar scenarios as their kids — romance, gossip, intrigue, backstabbing — not only humanizes the parental figure for younger viewers but also provides an explanation for how some of the teen issues came about.

“Part of the DNA of the show is to reveal these secrets and there is still some huge ones, huge secrets to come in the last two or three [episodes], kind of game-changing secrets,” said Aguirre-Sacasa. “When we were bringing Mary in, one of the nice things was, ‘Oh my god, they all know each other.’… The idea that [the parents] all went to high school together, you know, was kind of in the pilot. They all went to Riverdale High. And then what we realized is, ‘Oh this is great. They have a shared history and they know secrets about each other that their kids don’t know.’” Familiarity with an actor, especially within the genre in which they became famous, also helps to instantly build their on-screen relationships. On “Riverdale,” parent and child relationships that are the most compelling are the ones where the adult has that teen cred: Archie and his dad Fred (Perry), Jughead and his dad F.P. (Ulrich) or Betty and her mom Alice (Amick).

“When we went out and pitched it, I said ‘Riverdale’ was a lot of things: ‘Twin Peaks’ meets John Hughes,” said Aguirre-Sacasa. “I never said it was going to be a show about fathers and sons. …I did not anticipate the Fred and Archie and the Jughead and F.P. stories to go as deep. It was a surprise to me as we were working on the season, that a lot of the heart of the show resides here… When we get to a scene where it’s Fred and Archie at the kitchen table and it’s like, ‘OK, I can relax, we’re in good territory.’ Or Cole and Skeet, Episode 7, we really brought that relationship to the fore. It just moved me, and I think it has moved a lot of people.”

“Riverdale” airs Thursdays at 9 p.m. on The CW. “13 Reasons Why” is currently streaming on Netflix.

This Article is related to: Television and tagged 13 Reasons Why, Luke Perry, Molly Ringwald, Riverdale